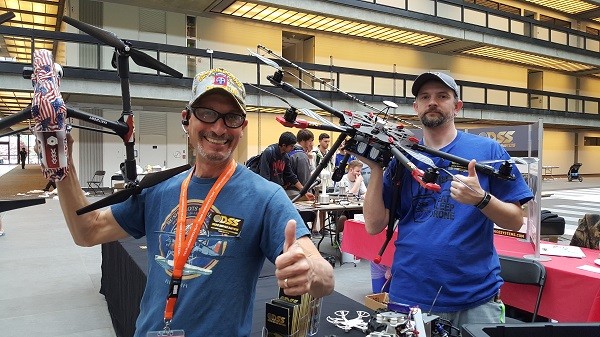 As he lay buried under countless feet of rubble near Ground Zero on 9/11, John Victor Jacobson had no idea that he would someday be working with the very technology that could have changed the course of history on that day. The incredible thermal imaging capability used by today’s drones (the kind that could have detected survivors buried following the World Trade Center attacks) wasn’t yet a viable technology in 2001.

Fast forward to 2016. Jacobson lives and breathes drone technology. He is the founder and CEO of Drone Service Systems (Clark), one of two dozen New Jersey companies that gathered for an innovation event at the former Bell Labs complex in Holmdel (now known as “Bell Works”).

During the weekend festival, Jacobson showed high school students the many types of drones he promotes for various aerial services, including law enforcement, fire control, surveying and aerial photography, among others. While drones have a notorious reputation, he said, “this technology, when regulated and used responsibly, can be safely used in many ways to protect and help society.”

The Building S.T.E.A.M. Maker Festival 2016 was powered by STEAM (science, technology, engineering, art and math). The event brought together professionals, amateurs, enthusiasts, hobbyists, innovators and entrepreneurs from schools and industry on May 13-15. Attendees entered a hands-on immersive environment of learning and exploration, explained Joel Auerbach, founder of the Building S.T.E.A.M.  festival and the innovator behind this year’s  event.

Anything Can Happen When People Set Great Ideas in Motion

“Anyone who takes something and does something unique and different is a maker,” Auerbach said. “The Maker Movement is about bringing ideas to life.” He got the idea for the festival when the former STEM initiative broadened its horizons to include art, transforming the acronym from STEM to S.T.E.A.M. and launching his Building S.T.E.A.M. organization.

Auerbach was a shop teacher in his “former life,” and said that he has always been passionate about tinkering and making things. When schools began to do away with hands-on shop classes, Auerbach realized that there were many kids who are extraordinarily innovative and very smart — but who aren’t bound for law school or medical school. They are meant to use their great ideas to help mankind in other ways.

Adding art to the science/math movement changed everything, Auerbach said. Now, “makers” have room to express themselves in a real and important way. So with plans for the first annual Maker Festival underway earlier this year, Auerbach needed a location. He thought of the one place known to all as the epicenter of innovation: Bell Labs. After he contacted the developers of the newly named Bell Works, the project took on a life of its own.

Moshe Gross, property manager of Bell Works, a project of Somerset Development (Holmdel), said his organization was happy to donate the space for Auerbach’s event. “This building has always been about creating new things, bringing together great minds,” Gross said.

“This is the very place brilliant minds came together to collaborate and change the world,” he continued. “Bringing kids together with inventors and innovators here is setting the stage for future change. Today, we are showing kids how far we’ve come, and we are succeeding in getting their minds working.

“Can you imagine if the next great thing comes from the mind of someone who is able to one day say they were inspired by this building? This is such an important part of history,” he said of the 2 million-square-foot structure, where 7,000 people worked during its heyday. “Just standing here, anyone would be inspired to do great things.”

The Bell Works project is well underway. The developers expect that the mixed-use environment will soon accommodate public events like art shows and farmers’ markets (attracted to the huge atrium), a township library and office space for innovative businesses of all kinds.

In fact, Gross predicts that, by the end of 2016, more than 1,500 people will be employed at Bell Works. Some of the companies currently leasing space are Spirent Communications, Symbolic Systems, Suttons Group and Vydia.  [ Ed. Note: Word came down recently that WorkWave has signed a lease for a 72,000-square-foot space in the building.] The Garibaldi Group (Chatham) and M. Wilk Consulting (Manasquan) serve as Bell Works’ exclusive office and retail leasing agents, respectively.

The Tesla Science Foundation(Philadelphia, Pa.) drew a lot of student interest at the festival, as Samuel Mason, a member of the foundation’s board of directors, began to describe the impact that the Nikola Tesla had on society. Tesla was often known as a “mad scientist” who was far more interested in bringing great ideas to light than in creating marketable products, said Mason. In fact, Tesla died in relative obscurity, while Thomas Edison became known as an inventor extraordinaire. In the past 20 years, the Tesla name has been resurrected — thanks to the green energy automobile industry.

The truth is, though, that Tesla emigrated to the U.S. in 1884 and went to work for Edison. However, being an inventor, engineer and physicist in his own right, he didn’t hesitate to branch out on his own when financial backers offered to set him up with laboratories. From there, he developed many electrical devices and patented the AC induction motor, which was licensed by Westinghouse. He is best known for his contributions to the design of the modern alternating current.

3DMonstr designs and manufactures industrial-grade 3D printers at its Princeton Junction  facility. The excitement was palpable around 3DMonstr’s booth, as attendees watched a 3D printer creating a bright-orange rocket ship. They listened to Ben Reytblat, the company’s founder and one of the lead engineers, explain how 3DMonstr’s printers are a cut above the rest.

“It’s the mix of features that makes our printers so useful,” he said, noting that there are other large-format printers on the market, and other printers that are strong and rigid. “There are printers with multiple extruders, and even one with water cooling,” he added. “But no other printer in our market segment has the important mix of all these features that we have.”

Previous: Propeller, a Day of Tech Entrepreneurship Learning and Fun, Through Pictures
Next: Catching up with Stephen DeAngelis, CEO of NJ company Massive Dynamics and Newtown, PA’s Enterra Solutions