Richie Etwaru, cofounder and CEO of Hu-manity.co (Princeton), and Michael DePalma, cofounder, president and COO, have accomplished a lot in the year since the startup began its operations.

The company has raised $5.5 million from angels, been covered by The Washington Post, Forbes and Fox Business; appeared on NPR; and was recently covered by the Financial Times. The cofounders have also been invited to speak at the United Nations, are on the radar of the Aspen Institute and have been invited to the World Economic Forum in Davos next year. They’ve influenced state laws across the country, influenced a federal law and have forged a global agreement with IBM.

Yet, as his company grows, Etwaru struggles with a harsh reality: The state of New Jersey is looking less and less like an innovative place where he can not only grow his company, but create a market, as he says Hu-manity.co is doing.

“What’s interesting here is that you have two guys from New Jersey who have built one of the most valuable data company value propositions right now. Yes, we are a year old, but look at the attention we are getting. Both Michael and I love New Jersey. Believe me, it’s not easy for me to have to convince my wife that we have to leave the state,” he said.

“This idea that we have to make human data our own isn’t a brand-new pattern. It played out twice before in human history. It played out in the 1600s around our creativity, and that gave us our intellectual property laws. Prior to 1623, there were starving artists. If you wrote a book, it wasn’t yours, if you drew a piece of art, it wasn’t yours.  This also played out in the 1800s around our productivity, which gave us labor laws.  We are simply playing out the pattern for the third time, which would give us ownership and control around our data.” This idea came from two guys from New Jersey, and germinated in New Jersey.

“I think it’s fair to say that there are no particular benefits to being in New Jersey that would keep us here. ”

“I think it’s fair to say that there are no particular benefits to being in New Jersey that would keep us here. We are starting up an entirely new category, and there is going to be an ecosystem in this category. This is a market that is going to be made, not necessarily one company. I wholeheartedly anticipate that we will have a dozen companies like ours in the next year or so that will pop up.”

The problem with New Jersey is three-fold, he continued. “One is that there isn’t a really good center of gravity for tech activity in this state. Is it Princeton? Is it Newark? Is it Morristown? Is it Hoboken? And that is difficult because when you have to hire teams, and bring them together into a centralized location, people often have a two-hour commute, as there aren’t local folks that you can hire.”

Number two has to do with the idea that the state government doesn’t understand true innovation, especially the fact that innovation is a long-run play.  “As you look at the teams that are being built around particular tech by the state administration, for example, the teams that are figuring out cryptocurrency and blockchain, these are not people who understand these matters. These are political appointees. And as a result, you don’t have the movement you are looking for,” said Etwaru.

“Some of the comments I’m seeing from state politicians on their twitter feeds are laughable,” he added. “When they are celebrating innovation in New Jersey, it’s a story about a cookie store in Princeton, or it’s a story about someone who is selling neon laser signs in a town somewhere. This is not innovation, this is not an innovation economy. An innovation economy goes back to the roots of AT&T and Bell Labs. It’s a long-run play.”  So, New Jersey doesn’t feel like the place where you’d want to build your innovative company, he said.

“The New Jersey regulatory framework is very difficult to navigate, and to the extent that there is a regulatory adjustment needed to create an industry, it’s hard to do.”

And the third reason is the most important, he noted. “The New Jersey regulatory framework is very difficult to navigate, and to the extent that there is a regulatory adjustment needed to create an industry, it’s hard to do.”

Branding is also an issue. “To be honest, I think that New Jersey should become the Silicon Valley of data. I shared with someone close to the administration the notion of calling New Jersey the ‘Silicon Garden,’ as we are the Garden State. I said, ‘Why don’t we start branding ourselves, even if we can’t get people trained in time, or a central location or a regulatory framework? Could we at least start to do some destination branding around the state?’ The person I spoke to didn’t understand marketing or branding, and thought it was a terrible idea.”

Etwaru also thinks it’s important that the legislative bodies and governor’s office work with people who have expertise, and that they “take out these people in the middle that don’t understand this stuff. If you work with the smaller states, the legislative bodies work directly with the experts, and there isn’t a layer of appointees in between. We are a market-making business. A couple million dollars of destination branding with some ads to brand the state as ‘Silicon Garden’ would make people feel good about being here, and make talented people have a sense of belonging here.”

Also, he noted, passing regulations is not the way to brand a state. “That just gets you in the conversation. I’m talking about really, really making an effort to become an innovation economy in a digital world, and I just don’t see that here. For us to be able to attract the best talent, and for us to be able to invest in real estate and localized assets, we have to be in a geography where the branding will attract the talent.”

Previous: Gunton Says Murphy’s Innovation Evergreen Fund is “Terrific Idea”
Next: Princeton Startup Hu-manity.co Believes You Should Decide What Happens to Your Data, and is Doing Something about It 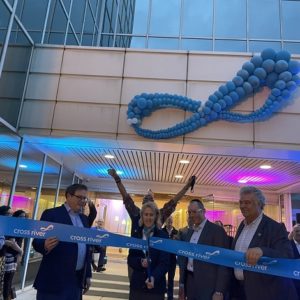