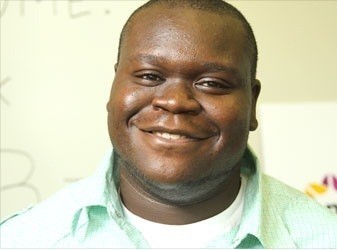 Anthony Frasier and colleagues plan to open a coworking space in Newark and bring General Assembly classes to the city. | Garland McLaurin

At the TechTalks @ Audible (Newark) event on Sept. 10, 2012, before CTO Guy Story introduced the speaker, he discussed new developments in the Newark tech ecosystem.

In particular, some BrickCity Tech Meetup (BCT) organizers and members have collaborated to launch a Newark tech coworking and education venue, ConvergeSpace, which will open in early 2013.

In an email, Anthony Frasier, a BCT founder, said ConvergeSpace will be the new home for BCT and other meetups, and the organizers are “excited about the efforts to bring together women founders” in the new location.

The group has been negotiating with General Assembly (New York), the educational underpinning for many startup tech scenes, to offer technology courses to Newark area entrepreneurs. Classes will begin this fall, Frasier said, with details to come.

Meanwhile, Frasier has sent members a questionnaire to find out which courses Newark-based founders and developers would like to see offered first. There is still time to fill it out, he told NJTechWeekly.com.

However, the BCT meetup group isn’t the only one trying to make Newark a better place for tech entrepreneurs.

Speaking early on in the process, Steven Royster, whose day job is with the New Jersey Economic DevelopmentAuthority (EDA) told NJTechWeekly.com he and some colleagues, have been working to bring a Lean Startup Machine (New York) weekend workshop to Newark. He is partnering with BCT and Startup Newark meetups.

Now, Royster says, the event is definitely coming to the Brick City. It is scheduled to take place Jan. 17-19, 2013, at NJIT. The three-day, hands-on, intensive workshop facilitated by Lean Startup Machine will accommodate between 30 and 50 startup teams.

“We are targeting 30 teams for our Newark event. Founders,entrepreneurs and developers learn how to apply Lean Startup principles in areal-world environment,” Royster explained.

Royster said he is working with Rob Caucci — SpaceSplitter cofounder and CEO, TechLaunch accelerator (Montclair) mentor and Lean Startup workshop coordinator — to find mentors for and spark interest in this event. A kickoff preshow meeting will be held at the offices of Newark law firm K&L Gates on Oct. 24, 2012, at 6:00 p.m.

The organizers, Royster said, are in the very early planning stages, reaching out to mentors, volunteers and key influencers who will drive teams to join the workshop. “I’m excited. I think the Newark startup ecosystem is growing. Like the city, it’s experiencing a resurgence,” he said.

As a member of the community, Royster says he feels a responsibility to make the Brick City a better place for those working in tech.”I thought this would be a good networking and educational framework to bringto Newark,” he noted.

Also part of the Newark tech ecosystem, Audible, now a division of Amazon.com, has been holding its monthly Tech Talks @ Audible for several months. The talks are preceded by networking and libations, and the crowd in attendance has a genuine interest in learning something new. Most recently, Asi Burak discussed Games for Change before an enthusiastic audience.

NJIT is a hotbed of tech entrepreneurship in Newark. The school encourages startup activities and hosts the NJIT Enterprise Development Center (EDC) incubator,which houses many technology and life sciences companies. The go-to person for startup activity at the school is Judith Sheft, associate vice president of technology development.

The EDC, says Jerry Creighton, executive director, is always looking for mentors for its companies. One of the most important recent developments at the EDC has been the establishment of a technology research center there by Truphone, the VoiP mobile provider who expects to create many jobs at the EDC. The Center says it has graduated more than 80 firms since its 1988 inception.

NJIT recently announced its next TEDx event, to be held Nov. 1, 2012, whose theme is digital connectedness. Issues to be explored include whether connectionsand collaborations result in better decisions and outcomes, how technology helps make stronger connections possible in an increasingly connected world and the positive and negative impact of ubiquitous computing on our lives.

And of course, Newark’s mayor, Cory Booker, is an investor in #waywire, a personalized news startup. That startup, however, is located in New York.

Previous: New Telecom Equipment to Help N.J. in Emergencies
Next: Tech Companies Should Offer Benefits Early in Their Life Cycles