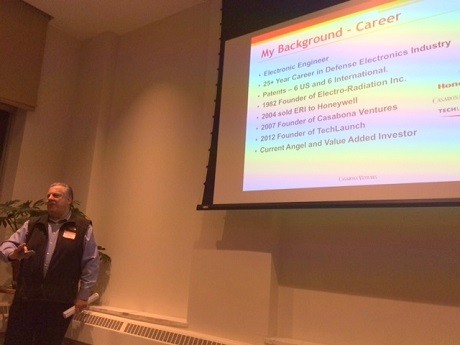 Mario Casabona, angel investor and founder of the TechLaunch (Clifton) accelerator, came to the Morris Tech Meetup event on Dec. 2 to discuss financing. Meetup organizer John Carini introduced him as the “entrepreneur of New Jersey entrepreneurs.”

Casabona first gave the audience some background information about himself. He started out as an electronics engineer, always on the R&D side of things, and  he holds several patents.

In 1982 Casabona founded Electro-Radiation Inc., and he was CEO until 2004, when the company was sold to Honeywell. Casabona stayed on with Honeywell until 2007, and later began Casabona Ventures (Kinnelon), an early-stage/angel investment and strategic planning firm focused on investments in IP-driven technology, which he continues to run. Casabona Ventures had a very successful exit with RaySat, an antenna company.

Then, in 2012, Casabona started the TechLaunch accelerator with the help of the New Jersey Economic Development Authority. He noted that “TechLaunch gave me the opportunity to work on more than just one company” at a time.

TechLaunch fits into the earliest stage of investment, the “friends, family, founders and fools” stage, also known as the “seed stage.” Entrepreneurs in this early stage typically seek funds from people close to them, so they can first develop their ideas. They have the highest risk and the lowest probability of success, according to Casabona.

Companies that don’t team up with an accelerator take about a year and a half to get to a minimally viable product, he pointed out. TechLaunch, like other accelerators, seeks to “de-risk” very early startups, but TechLaunch has condensed the time frame down to 16 weeks.

In exchange for equity, TechLaunch offers a business boot camp for startup entrepreneurs, along with mentoring, coworking space, and help with pitching (including the preparation of an investor pitch deck) — which totals about $75,000 in value or maybe more, he indicated.

A demo day at the end of each program puts the companies before potential investors; and even after the program ends, TechLaunch continues to provide warm introductions to investors. The accelerator also allows companies to remain in the coworking space on the premises if they wish to.

Casabona believes the terms, which give investors 15-20 percent of a company at the seed stage, were fair. “Working with companies at the seed level has the highest risk and the lowest probability of success. They [investors] deserve it because they are taking the highest risk.” Later in the presentation, Casabona said that angel investors who want more than this are probably not working in the company’s best interest.

He added that, if an investor really wants a company and the team, that investor will work with the company towards more favorable terms or increased valuations. Companies that graduate from an accelerator are usually valued at anywhere between $1 million and $2 million.

After an accelerator, most companies will need follow-up funding during the early stages. Some venture capitalists claim that they come in at an early stage, according to Casabona, but when you talk to them, it becomes clear that they are not really reaching down to the early stages. They still look at a company’s trailing revenue and past financial performance over a period of a year. But startups transitioning out of the seed stage don’t usually have any financial performance numbers to give.

Angel investors, on the other hand, are usually high-net-worth individuals, and many of them work in investment groups. They provide much of the early-stage financing for companies. “Individual angels do not have the same success rate as those who work in an investment group,” Casabona said. “As a group, you can do more due diligence and make some smarter decisions.”

There are many more angels than active VCs, he noted. “There is money out there. You may need to go to the East Coast, West Coast or even Canada. You just have to find the right person.”

Angels also prefer to be value-added investors, whose management advice or contact portfolio can be used to help a company grow.

Casabona advises seed-stage companies seeking follow on financing to start low, at $250K, and, “yes, you are going to take a hit on valuation.” But once you get to the next milestone, your valuation goes up, he said. And when you get to the following milestone, it increases again. “So you are getting some money up front, and you are given time to increase your company’s valuation.”

In response to some questions from the audience, Casabona said that about 20 percent of the companies that had graduated from TechLaunch had received follow-on funding.

He acknowledged that some of the companies had failed. “Founder commitment is very important. I’ve seen a few companies that have broken up because the founders can’t get along.”

Comparing the commitment of the founders to a marriage, he added, “It’s best to marry someone who you’ve known for a really long time. The same with a cofounder … Teams that form because they have to are more likely to have trouble.”