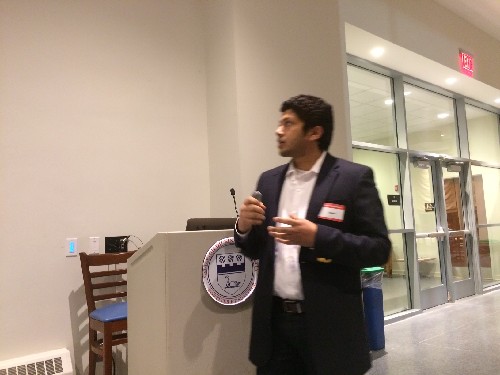 At the Dec. 2  Morris Tech Meetup, which featured TechLaunch founder Mario Casabona, about 75 attendees also got to hear presentations by the founders of two New Jersey startup companies.

The first pitch was from Vishal Singh, cofounder of Pintact (Princeton), a startup founded on the belief that people are wasting too much time managing their contact address books. Singh’s cofounders are in New York City, with developers in Philly, Germany and Bangalore.

“All of that should be seamless and easy for me and you,” Singh said. He set up the scenario of a business meeting where everyone puts his or her business card on the table. But all the names and contact info on the cards could be lost if you don’t take care to enter them into your address book, he said. “Or maybe you tried to scan them in,” but found it a frustrating experience.

Pintact, he said, “allows the exchange of business profiles using a simple pin number. Users create their own business profiles, which can be easily exchanged.” Everyone manages his or her own information, so when the user changes jobs and email addresses, they can just update their profile, and that information is automatically sent to their contacts.

A group feature allows users to label contacts as belonging to groups such as “marketing gurus,”  “family” or “friends.” Users can then upload contact information to the members of any group simultaneously. The app can also be used as an up to date directory such as an employee directory on a phone, by organizations who need to reach to their members.

When a user creates a business profile — and it is possible to have more than one — the profile can be exchanged on Pintact, and users can integrate them back into their native address books.

The app is available on iOS and on Android, Singh said. The startup will be expanding its team and raising capital over the next several months, he added. A demonstration video can be viewed on the company website by clicking on the “Learn More” link.

The other pitch was from Christopher Coppola, cofounder and CEO of  SHIELDtech, a startup that graduated from the TechLaunch accelerator, in Clifton, and is developing its product there. The company has been perfecting its pitch at several tech meetups that NJ Tech Weekly.com has covered.

At this meeting, parents of college students who were in the audience were very impressed with Coppola’s presentation.

SHIELDtech solves the problem of security on college campuses with a key fob device that is connected to a student’s cell phone via Bluetooth. The statistics on college assaults, robberies and rapes are appalling. If a student in danger only has a cell phone, it can take several minutes to find the phone,  put in a pin to unlock it, call for help and answer dispatcher questions, before help is sent, he said.

“Blue Light phones, emergency phones that are placed around campus, are great if the student knows where they are,” but most students don’t take notice of them early enough to make them useful, he said.

SHIELDtech’s solution is designed around the student’s own ecosystem, Coppola added. Students never leave home without their keys, he said. They can’t drive or get into their dorm without them. Also, they always have a cell phone with them.

So if a student gets into trouble, he or she can activate a button on a key chain that links to the cell phone, and be in instant communication with the campus police, which will immediately see the student’s profile and location.

“The phone calculates your GPS location, and sends a profile of who you are and where you are directly to campus police,” he said. The police dashboard receives the GPS location and all the student’s information, including a photo, so police can immediately respond to the incident. The solution includes a wireless key fob, a cellphone application and a police dashboard.

Coppola said that the startup is beginning a trial to see what colleges like and don’t like about the system, so the company can adapt it based on a better understanding of users’ needs. “In the spring we are actually working with Stevens Institute of Technology (Hoboken) to pilot our solution,” he added.

During the Q-and-A session, one audience member asked, “How do you keep from accidentally pressing the button?”  Coppola answered that, as the button was a combination of electrical and mechanical design, students would have to triple-click the button to get help. A single accidental click wouldn’t work.

Asked about the system’s usefulness for students who don’t carry keys, Coppola said the fob could be clipped onto a backpack or into a wristband accessory. In response to a question about Bluetooth connectivity, he noted that the phone would have to have its Bluetooth on and that students couldn’t be too far from their phones. Some accommodations in the design have been made to help preserve cellphone battery life.

He also demonstrated the sound the device makes when activated, which was loud enough to call attention to the student and perhaps ward off trouble. A silent option was also available, he added.

Another audience member asked if the application could contact a friend or family member, instead of the police. “The friends or family aren’t the ones who can respond to an emergency at a given moment,” Coppola said. “We want to give the information to the people who could actually respond and help the student.”