Most seniors aiming for first place at a Stevens Institute of Technology entrepreneurship competition on May 3 talked about their new algorithms, robotics and technologies aimed at cleaner oceans and atmosphere.

But with one word, Stevens senior Faris Ibrahim and his crew left almost all their rivals in the cosmic dust.

His group, Castle Point Rocketry, tied for first place after pitching their plans, including a summertime launch in New Mexico, impressing a panel of judges at the packed and electrified 470-seat DeBaun Auditorium, in Hoboken.

“Our rocket is not just an idea. We are currently constructing it, complete with data acquisition and recovery,” said Ibrahim. “We didn’t just design a new type of rocket engine. Nah. We built one. We raised $500,000 to do so.”

The entrepreneurship competition was part of the annual Stevens Innovation Expo, which this year featured some of 550 students responsible for 188 design projects that were on display in venues across the 55-acre Hoboken campus.

From among those 188 projects, 10 startups were picked for the entrepreneurship competition, this year named after generous donors to Stevens, the Ansary family.

When the dust settled and all the pitches were presented, Castle Point Rocketry and LifeSkills Software, which develops video games to help special needs students learn everyday skills, split the first place honors and the prize money, with each team receiving $7,500, since there was no second place winner .

Castle Point Rocketry’s launch will most likely take place in July in New Mexico and reach beyond the Kármán Line, the boundary where Earth’s atmosphere meets outer space, at an altitude of 100 kilometers, or 62 miles, said Castle Point Rocketry cofounder and head propulsion engineer Monica Traupmann.

Traupmann noted that the $500,000 raised by the group included in-kind donations and services. The rocket is 21 feet long and has a 14-inch diameter.

“The goal of CPR as a project is to be the first collegiate team to launch a rocket past the Kármán Line,” she said. “Beyond that, we’re interested in proposing a proof-of-concept rocket that utilizes recent advances in aerospace technology to develop a suborbital rocket on a budget under a million dollars and in the timescale of a year.”

The group is seeking $2 million to develop the necessary location and testing infrastructure.

Ibrahim, the team’s avionics lead, told his audience, “It has been hypothesized that the next cancer-fighting innovation will have its beginning in space, with pharmaceutical companies like Merck and Novartis already researching new drugs on the international space station.

“Despite the advancements in the field by startups, there is still a lack of availability and affordability that prohibits small businesses and universities from accessing the benefits of space,” he added.

The Castle Hill team has leveraged new technologies to construct a reusable rocket capable of carrying a 4-kilogram, or almost 9-pound, payload.

Traupmann said that the team had been working on the project for a little over a year.

“As we’ve immersed ourselves in the aerospace industry more, we learned far more of what it actually costs, and we’re proud that we were able to raise this much funding to rise to the occasion,” she said.

One of the judges, New Jersey Secretary of Higher Education Zakiya Smith Ellis, said that the panel was impressed by all the finalists.

“I thought their enthusiasm for what they were doing was fantastic, especially LifeSkills. I’m in education, and so the connection between knowing what the realities are for students who have special needs and something that’s going to meet their needs is great,” she said.

Gattuso developed the video game idea after doing volunteer work in a special needs class for a computer science project when he was a high school freshman in Point Pleasant Borough, seven years ago.

The classrooms had computers, but the students weren’t using them because there wasn’t any software built specifically for their needs, he said. Gattuso created short video games that helped the students improve their spelling skills, handle money and shop on a budget.

Another judge at the competition, Doug Kennedy, cofounder and CEO of Studio Wildcard (Kirkland, Wash.), said that he was impressed with the LifeSkills group, and met with them after the winners were announced.

Kennedy’s video game development studio is responsible for the most successful indie PC game of all time, “ARK: Survival Evolved,” which grossed more the $800 million from digital sales platforms. He also was the president and CEO of Reverb Communications (Twain Harte, Calif.), from 2010 to 2012, where he developed two iconic games: Guitar Hero and Rock Band.

“I really thought the presentations from everybody were rock solid,” said Kennedy. “They are finding problems that need to be solved. “

“I really thought the presentations from everybody were rock solid,” said Kennedy. “They are finding problems that need to be solved. Now, obviously, I’m from the videogame industry, so I leaned very heavily on the video game aspect.

“I wanted to talk to them about getting into some more details about their game and the platform they are building their game on, and what type of technology they were using, and get a little more sense of their monetization strategy,” he said.

LifeSkills now has about $10,000, said McKeon. They had also captured first place the week before at UPitchNJ’s fourth annual competition, netting $2,000.

During their pitch to the judges, McKeon and Saleem said that they were seeking $250,000 to pay for marketing, further game development, the addition of 50 more schools to their platform, and for testing the software.

Kennedy noted, “One of the things I would dig in, as I talk to them some more is: Is that enough? Is that too much? What are they looking to do to build on the idea they have? I think it is an excellent idea.”

“We have tailored and revamped the process flow for pediatric trial nurses and their departments, so they can better decide which diseases to tackle, which nurses to assign and which sponsors to engage,” Nicholich said.

There were other contenders who hadn’t been picked for the final competition, including students who had developed an active shooter-deterrent system that locates an armed assailant on school grounds and directs students away from intruders. There were also seniors who had developed algorithms for autonomous machinery that help robots adapt to more social environments. 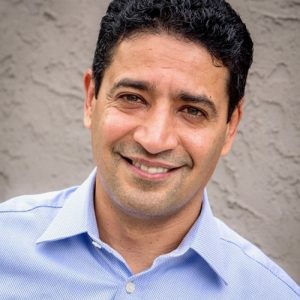