It’s not too often that a tech entrepreneur can speak authoritatively about multibillion-dollar construction projects, new innovations in visual technology and the late pop artist Andy Warhol ‒ all in the same breath.

The translucent-paneled façade of EarthCam’s headquarters, on a former factory site, produces a high-tech glow that serves as a sunshield to reduce energy consumption in the daytime.  At night, the structure’s appearance changes dramatically, resembling thousands of digital video pixels created by small openings in the façade backlit by a few thousand LED lights.

On entering the spacious headquarters, visitors encounter a nearly three-story glass atrium dominated by a towering wall displaying live video content.  The walls of the building’s interior are adorned with images from the company’s cameras and replicas of some of Warhol’s iconic pieces, including the Brillo soap pad box sculpture and a Marilyn Monroe screen print, and other recognizable works of Warhol’s art.

Outside, the grounds include meditation areas, sculptures, a walking path, bike trails and an arboretum, all reflecting EarthCam’s commitment to a healthy work environment.  The company used more than 40 different time-lapse cameras to film the building’s construction, which broke ground in 2015.

It was a dinner with Warhol that gave Cury the idea to start EarthCam more than 20 years ago.  Cury recalled the artist telling him that “if you put a camera on something, you can make it really famous.”

In fact, many of those viewing Hurricane Irma in 2017 can thank EarthCam for its coverage of the massive storm in Florida. The company was fortunate enough to capture the hurricane’s destructive force, as its webcams were one of the few cameras that didn’t lose power during the storm.

Recently, EarthCam made a deal with Amazon that allows users of the latter’s cloud-based voice services Echo and Alexa to summon EarthCam’s 4K broadcast-quality live streams of popular tourist locations or events, like New Year’s Eve in Times Square or Mardi Gras in New Orleans.

The device, called the “Amazon Echo Show,” displays EarthCam’s content based on different utterances, such as asking Alexa to produce live streams of a sunrise in Hong Kong or a beach in Hawaii.

“We empower people with visual information. Our live camera views take people to places where they may never get a chance to visit,” Cury said.

The company also offers webcam technology and managed services to businesses and government agencies. The building of roads, bridges, tunnels, buildings and other major construction projects is one area in which EarthCam says its services can help reduce costs, minimize scheduling delays and increase safety.  In 2017, the company’s time-lapse cameras and photography documentation were used for more than $250 billion construction projects. 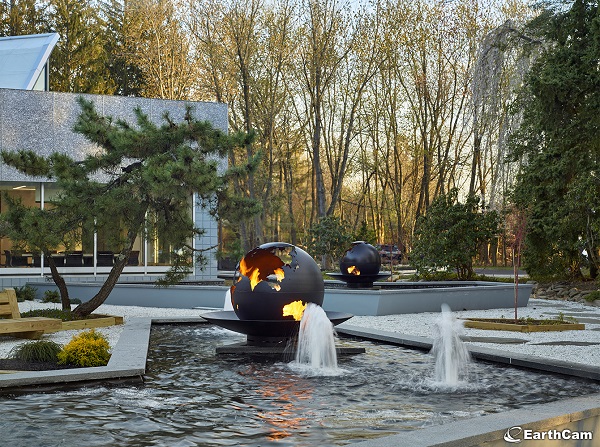 For example, EarthCam’s technologically advanced cameras can zoom in on a construction site of an office building and continually track the progress of that project, allowing workers to make needed adjustments faster or spotting potentially dangerous situations that can’t be seen with the naked eye. The cameras are also used for a number of transportation-improvement projects; for instance, by providing a more accurate monitoring of traffic flows that can inform the planning of new roads and bridges.

Cury’s use of cameras to create art goes back to his days attending a film school in New York.  Earlier in his career, Cury worked as a producer and director of TV shows and films, including a stint at Saturday Night Live.

Some of his films and videos starred celebrities like Rodney Dangerfield, Paul Reubens (a.k.a. Pee-wee Herman) and Larry “Bud” Melman.   He was also an associate producer of the 2016 documentary “Spring Broke,” which chronicled the rise and fall of Daytona Beach, Florida, as a college spring break haven.

When Cury founded EarthCam, the company focused on security surveillance cameras.  But thin profit margins led Cury to pivot the company into what would power the New Economy: the Internet.

EarthCam later expanded beyond its global network of tourism webcams to services for business customers, which has led its growth over the years. Today, the company has 100 employees and 13 offices worldwide.

“We learned to blend art with technology and to use it benefit our clients,” Cury said. “We have found a way to tell the story of how our world is being built in the 21st century.”

Cury, who points to Warhol as one of his biggest influences and even has a company webcam aimed at his grave site, in western Pennsylvania, said that EarthCam’s success can be summed up with one of the artist’s famous quotes: “Being good in business is the most fascinating kind of art.”