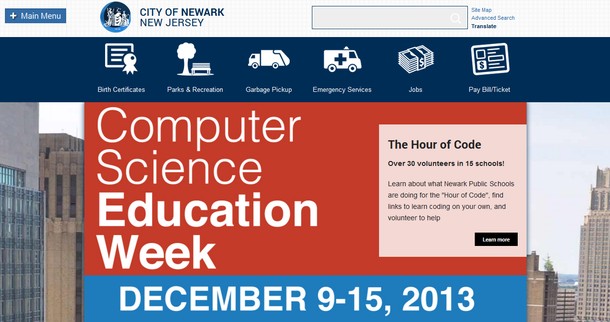 A screenshot of the beta version of the Newark website. | Esther Surden

Last month the city of Newark released the beta version of its newly designed website, created by the winner of the #HackNWK hackathon in June 2013. NJTechWeekly.com covered the hackathon here.

“The new website is a way for us to realign the government of Newark’s relationship with its citizens,” Seth Wainer, Newark’s senior technology policy adviser, told us. “We want to do this on many fronts, but the website is a great step forward.”

On one team was Vajaah Parker, a West Orange native who works at The Web Development Group (Alexandria, Va.), a socially conscious Web design and development firm. She was joined by Newark resident Derrick Phillip, a  Rutgers (New Brunswick) graduate who now works at The Economist.

The two were eventually selected as the team to develop the website. “We saw that they were incredibly excited about the opportunity,” Wainer said. Funding to support the project came from $15,000 provided by the City of Newark and a matching $15,000 from Newark audio book firm Audible.com, now a part of Amazon.com.

Said Wainer, “We spent a little time improving on the initial mock-up and going through a few iterations of the design.” Then, he said, the city “went through our closet and dusted everything off to figure out what content was relevant and what was not needed any more.”

In an interview, Parker said she thought the new website was an improvement over the old one but wished she had had more time to implement an even more innovative solution.

“So far the [beta] website has proven to be a lot easier for the Newark staff to update and maintain. They have been able to do things like move content over on their own. They do have a few questions, but we haven’t done extensive training.” The site is also responsive, she added, working well both on a desktop computer and in a mobile environment.

There are innovative modules on the site, Wainer added. “One from Nextdoor is a civic social media tool New York City is currently using that we’d like to launch in the current months to Newark. We also have our very first online 311 submissions section, and we have links to open data — via the Socrata Open Newark portal — that provide the city with a venue to post a multitude of diverse data sets for use and manipulation by interested residents at all times.”

The city will also be pushing out a Twitter-based conversation tool in conjunction with OpenPlans called #Connect-Newark, he said.

The Events page actually feeds into events posted by other “doers” in Newark. For example, users can find out what is happening at the Newark Public Library or the Prudential Center.

“This is our way of saying that there are a ton of activities going on in our city. We are not the best at corralling them, but we can be the best at centralizing them and providing the links to the best things happening,” Wainer said.

City services are listed at the top of the home page. Wainer said the city did an analysis of the most used parts of its original site to determine what was important to Newark residents. Future plans include online payment of fees, taxes and water bills, he added.

“Right now a lot of people come to city hall to pay their bills. That is really not acceptable in the 21st century. We have to make it possible for people to pay their … bills from home on a credit or debit card,” Wainer said.

Parker added, “I think I will be maintaining the site for another eight to 10 months or so. I’m excited about that because I don’t think I had a lot of opportunity to push the envelope, because of the initial time constraints and the need to accommodate a lot of different design requests. Hopefully, during the maintenance period I’ll be able to recommend some more forward-looking updates” ranging from aesthetic choices to functional updates, she said.

One of the things Parker would like to see added is a way for Newark to build out sections that will let citizens communicate better with the city. “I think that the website can serve as a point of interaction so that people can integrate their own experience to the website, whether [by] adding their own stories to the overall story of the city or [by] having the ability to report about what is going on around them,” she said.

Newark has been seeking feedback on the new website from residents. “We want to know what people are finding, what they are having a hard time finding, why they came to the site in the first place,” Wainer said. So far the site has had several thousand hits, and the city is working on making changes that will make it more useful.

Said Parker, “Newark has been using the beta period very well. People have been submitting feedback, and that has allowed the content teams at city hall to go find the content that is not on the beta site that should be there, or to write new content and create new sections that people were looking for.” Not bringing over all the content from the old site was intentional, Parker noted; however, when Newark learns of something people are accustomed to having, the team wants to make it available.

One of the city’s prerequisites was for the new site’s design to be easily maintainable and the content easily adjustable, Wainer said. Parker noted that the website is built on a popular CSS framework, the Zurb Foundation framework, integrated with WordPress for a Content Management System, which will let the city build out sections as needed.

Also involved in the project, said Wainer, are the Newark Department of Administration, the Mayor’s Office, the Press Information Office and Newark’s Chief Technology Officer. “Chris Darby, CTO for the city, has been a tremendous help. The city has been doing a lot to revamp the content,” he said. He added that Alex Bryden, formerly with the Brick City Development Corporation, has been working on the graphics.