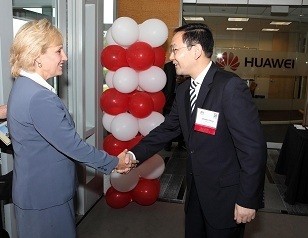 Huawei: When Huawei, the China-based global information communications and telecom company, established its North American R&D offices in Bridgewater in July 2012, N.J. celebrated because the company pledged to bring some 55 additional jobs here. Later reports increased that figure to 90.

In January 2011, the New Jersey Economic Development Authority(EDA) gave the company’s U.S. subsidiary, FutureWei Technologies, a $1.3 million Business Incentive Program grant as part of the state’s  plan to create new jobs. In July, Lt. Gov. Kim Guadagno was there to cut the ribbon at the company’s new facility. NJTechWeekly covered the event here.

Now Huawei is in trouble, the kind that could affect its U.S. operations. As reported by the New York Times and many others, the company was mentioned in a House Intelligence Committee report written after a yearlong investigation of it and another Chinese firm, ZTE. The report essentially concluded that U.S. companies should think twice about doing business with the Chinese firms.

The report says U.S. government and sensitive infrastructure systems should avoid using Huawei equipment. Rep. C.A. Dutch Ruppersberger (D-Md.) warned of a heightened risk of cyber-espionage or cyber attack from the two firms, which he said have ties to the Chinese government.

As mentioned in the Wall Street Journal, the report drew a denial from the Chinese government and some strong words from a Chinese commerce ministry spokesman, who warned that relations between the two countries could be hurt by the publication. He added that the report is based on subjective conjecture and untrue foundations and made groundless accusations against China.

Single Touch Systems: Single Touch Systems, the Jersey City mobile media solutions provider that recently defended its patent portfolio aggressively, said it had closed on a $3 million private placement raised by  accredited investors and Taglich Brothers. The financing was completed on October 5, 2012, with two-year, 10 percent convertible notes, netting the company approximately $2.8 million after expenses. Interest on the notes is payable semi-annually. The note’s principal balance is set at a conversion price of $0.50 per share, which is above the closing market price of $0.28 on October 4, 2012.

Note purchasers will also receive one warrant for every conversion share underlying the notes, exercisable at $0.25 within three years of the purchase. Single Touch said it intends to use the net proceeds from the offering primarily to capitalize on organic growth opportunities, with a portion being used to support activities to protect its intellectual property portfolio.

SilverSun Technologies: Livingston-based SilverSun Technologies is continuing with its acquisition strategy. It recently signed a letter of intent to acquire Information Systems Management (ISM), a reseller of enterprise, accounting and customer relationship management software solutions. SilverSun’s plan is to bring strong small companies on board so “the combination of their respective strengths will promote broader market penetration and more rapid growth in sales, and enhance operating efficiencies,” according to a release. ISM is headquartered in Portland, Ore. and has several offices in the U.S. In addition to discussing its acquisition of ISM, SilverSun also said it had registered a $600,000 win in the form of an order for Sage software by a specialty chemical distributor.

IO: Phoenix-based IO, the modular data center specialist with a flagship facility in N.J., has raised $90 million in equity through a group led by New World Ventures (Chicago), an investment arm of The Prizker Group. The remainder came from existing backers, including Sterling Partners, a VC firm with multiple locations. The company said the money will help accelerate deployment of data center modules to customers and let the firm increase software development activities. IO told Fortune it hopes to go public in 2013. The company recently had a major win when Goldman Sachs decided to deploy modules rather than use the traditional data center model.

Previous: NJIT Roundtable Asks What Skills Will Get IT Professionals Back to Work
Next: Clifton Science & Engineering Festival Draws Thousands