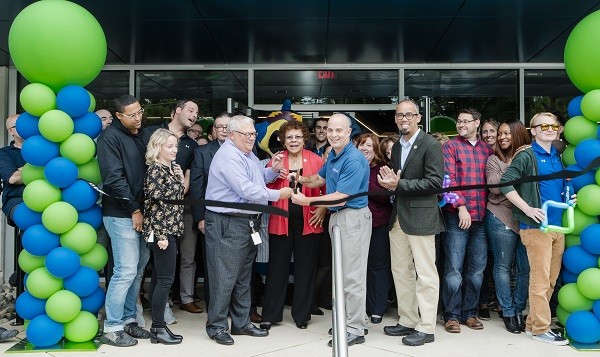 Billtrust: Billtrust, a business to business company that provides accounts receivable automation, celebrated the official opening of its new corporate headquarters in Lawrenceville on September 24. The company had previously been located in Hamilton.

The search for a new HQ location was necessitated by the company’s rapid growth. Billtrust chose to remain in New Jersey partly thanks to a Grow NJ grant it received from the New Jersey Economic Development Authority.

“We’re excited to have a new home in Lawrenceville for our corporate headquarters and continue our commitment [to] job creation in New Jersey,” said Billtrust founder and CEO, Flint A. Lane. “The Billtrust culture is unique and this space reflects that with more collaborative spaces and state of the art technology which will allow our teammates to thrive.”

The new corporate headquarters houses all of the Billtrust New Jersey corporate offices under one roof for the first time since March 2015. The company operates five additional facilities, and is actively growing its teams in Denver and Chicago.

Synchronoss: Synchronoss (Bridgewater), which has had its share of financial problems recently, announced some good news. The company participated in a successful Proof of Concept (PoC) for a new cross-carrier mobile payment service based on the Rich Communications Services (RCS) global messaging standard and on TBCASoft’s cross-carrier blockchain platform. Synchronoss’ partners in this payments solution were SoftBank Corp., a Tokyo-based telecom carrier, and TBCASoft (Sunnyvale, Calif.), an “innovator” in cross-carrier blockchain platform technology.

Synchronoss President and CEO Glenn Lurie said: “Our PoC demonstrates how SoftBank is at the forefront in bringing to market new cutting edge technology through the use of blockchain as well as new RCS-based mobile services, which will disrupt the current messaging and payments market, creating new opportunities for customers, brands, and businesses.” He noted that this will drive incremental revenue for operators from messaging.

“RCS messaging will become the foundation for a new, feature-rich marketplace for brands and merchants, both large and small, to interact with subscribers,” he added. “With our expertise and global reach across multiple messaging platforms – not only RCS, but also email, IM, MMS and SMS, Synchronoss is ideally positioned to take advantage of this important new trend in mobile.”

The new patents represent applications of Princeton Identity’s unique approach to iris authentication in three very important areas: access, marketing and financial transactions. Using the techniques described in these patents, Princeton Identity advances the application of iris identification and personnel authentication beyond the domain of physical security; it anticipates the adoption of these technologies in the broader marketplace.

The company also announced that its iris-scanning technology was being used in the Samsung Galaxy Note9.  Building on the successful integration of the technology into both the Galaxy S8 and S9 devices, Galaxy Note9 enables users to easily unlock their phones with a quick glance at the device, maximizing both security and convenience. The Samsung Galaxy Note9 was officially launched on August 9 at an event held in Brooklyn, N.Y.

Previous: Modernizing the Grid in NJ Vital to Achieving Clean-Energy Targets
Next: In Livingston, a Coworking Venue for Performance Car Enthusiasts