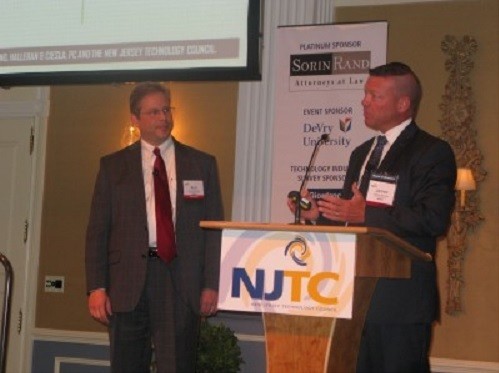 Results are in from the IT Industry Survey conducted and sponsored by WithumSmith+Brown (Red Bank), Giordano, Halleran & Ciesla (Red Bank) and the New Jersey Technology Council (NJTC), and there is good news for New Jersey job holders and seekers.

Some 46 percent of the companies completing the survey said they would be increasing their IT staff over the next 12 months and nearly 31 percent said their IT staffing would be staying the same.

In addition, during the past year and for the most part, N.J. tech companies have been looking for employees from the Garden State, with some 34 percent of those surveyed acknowledging that they had successfully recruited IT talent from New Jersey during the past 12 months.

Just 16 percent of the respondents had recruited internationally, dispelling the misconception that N.J. tech companies are looking elsewhere, even internationally, for talent. In fact, one third of the talent successfully recruited last year hails from close to home.

This is the second year that the organizations have jointly conducted the survey, this time and last receiving responses from C-suite executives and key decision makers at more than 100 N.J. tech companies representing global, national and local businesses. The survey was unveiled at the NJTC annual meeting in July 2013.

Some 66 percent of the replies came from small companies (fewer than 100 employees), 11.6 percent were from medium-sized companies (between 100 and 249 employees) and the rest were from large and very large firms. Last year’s survey had about the same number of questions as that of the preceding year.

So what IT talent are N.J. firms looking for? “There is a huge push now, more so than in 2012, towards custom programming and application development, we found,” said Jim Bourke, a partner and director at WithumSmith+Brown’s Red Bank office who, along with Kurt Anderson of Giordano, Halleran & Ciesla developed and conducted the survey.

Almost half the survey’s participants said they anticipated demand for programming and design talent during the next 12 months, prompted by growth in the mobile and big data sectors. However, about as many respondents, 49 percent, said job applicants lack the needed skills in those areas.

“What would I be doing if I were in higher education and in charge of a university?” Bourke asked. “It doesn’t make sense to be focusing on just teaching programming languages. You need to broaden curriculums to include the cloud, mobile app development and iOS app development.” Higher-learning institutions should also be focusing on teaching user experience and all other aspects of app and Web design, he said, to ensure students end up in careers in which they can make a living.

Tech companies onboarding new hires pointed out in the survey that they don’t have enough company resources for IT employee development and training.

Too much of the burden is on the employer today, Bourke said, adding, “These technology companies don’t have the capital or resources to do the training, but they are forced to train the new hires because those new hires are not coming in from the universities with the necessary technical and soft skills to hit the ground running. … We need to continue to strengthen the collaboration between the technology sector in the state and the state’s universities.”

Part of the problem lies in the lack of so-called soft skills, such as the ability to give presentations or master public speaking. While last year only 27 percent of the tech companies surveyed complained about this issue, this year that figure rose to 49 percent, suggesting that the problem is getting worse.

Bourke speculated that the trend among younger employees toward using electronic means of communication like email and social networking makes them less practiced in face-to-face communication. Employers would also like their new employees to have business knowledge to bolster their technical skills.

Bourke noted that the lack of qualified talent was the biggest challenge tech companies face in securing new employees. One respondent pointed out that finding the right people can be difficult because they are often “gainfully employed” and another bemoaned the need to use a recruiter because great IT folks aren’t looking for work. “They do have the talent pool out there, but they are just not qualified,” Bourke added, which creates a training dilemma for companies.

One participant noted that young employees are more willing to work for less money while learning, Bourke said, a plus for cash-strapped firms. “In the past, employers faced demands for higher salaries from entry-level employees. We noticed this time around that the talent who has been out there looking for jobs may be willing to settle for less compensation as they learn on the job,” he explained.

Big trend towards use of online training resources and webinars

The survey also looked at training trends, to help tech companies identify where they should be allocating their money, Bourke said. “Should I be spending my dollars hosting seminars at hotels and conference centers and sending my people away to conferences, or should I be investing in webinars?” he asked. The survey uncovered a trend among firms toward using Web-based types of training, he said: nearly 54 percent of the participants said they use webinars for training and almost half noted that they use online-directed training avenues. A year ago, only some 46 percent of the respondents asked the same question said they used webinars for training.

A question on the biggest challenge in retaining qualified talent revealed that providing competitive compensation and benefits is difficult, with almost a third of the tech company participants noting this problem. However, some of the companies said they have no problem retaining employees, with one citing the tough job market as helping with this.

While most of the companies (87 percent) responding to the survey said they provided their employees a traditional salary, many offered other incentives to keep employees at the firm. For example, 46 percent of those interviewed provided noncompensation incentives such as flex time and the ability to work from home. One firm even mentioned the use of company cars as an employee incentive, a practice some may think to be outdated. Only 30 percent of the companies offered equity compensation and stock options as incentives.

Bourke offered an explanation for this. “You are dealing with a generation of entrepreneurs that most likely saw their parents lose financial wealth as a result of taking stock options with technology companies,” he said, so they may not want them. “Years ago, 90 percent of our employers were offering stock options, and their employees were jumping for them,” he noted.

Despite massive education campaigns rolled out by the New Jersey Economic Development Authority (EDA), the NJTC and others, New Jersey tech companies still seem unaware of state and federal incentives available to help them. In fact, 74 percent said their awareness of those programs has not increased during the past year.

To assess the current state of the industry, the survey’s developers added questions on Superstorm Sandy and immigration reform.

The survey asked, “As a result of Superstorm Sandy, have you implemented any new internal/external procedures with employees and/or business partners?” Not surprisingly, 45 percent of the companies responded that they had fortified their internal communications plan, and 38 percent said they had reviewed or implemented disaster recovery plans. Some 34 percent had addressed backup storage issues. A company that survived Sandy unscathed said it had done so because it had had a robust disaster recovery plan in place.

Asked how additional restrictions on H1-B visas would affect their organizations, nearly 60 percent of those surveyed said their companies were neutral on the subject. Only 13.4 percent said they would be materially affected by such a change. The question evoked interesting comments, with one participant noting a preference to hire American workers and another saying, “We support greatly expanding the program to make it open ended (no quota) for software engineers.”