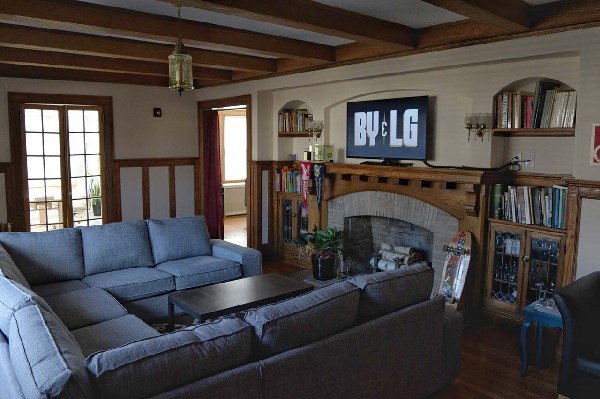 The workspace at By & Large. | Courtesy By & Large

Partnering with other New Jersey specialists and working with New Jersey companies has been a ticket to success for digital agency By & Large, as it brings its New York vibe to Monmouth County.

The company is located in a house in Red Bank, and has an atmosphere that feels very open and collaborative. The agency doesn’t have conference rooms. Creatives do their work in rooms converted into offices, and meet with others in the living room or the library. Different areas of the house are broken up into spaces for different disciplines, such as copy, design and motion graphics.

“We decided we wanted to have a business in New Jersey,” Field said. “We wanted to get rid of our commutes and see our kids more. We also wanted to create a team that was smaller and more integrated in terms of disciplines, and we wanted to staff the agency largely with senior people,” he told us.

“There is a lot of energy in the Monmouth County area, and we thought Red Bank would be a great place to anchor” the agency, Field continued.

For the first three years of its existence, By & Large executives often found themselves on airplanes, as they serviced national customers, including a sports protective gear company, a national furniture company and a national media company. Now By & Large, while still courting national clients, is looking at its role in the New Jersey ecosystem.

“In 2017 we are really leaning back into some of the local marketplace. We are trying to build awareness that you don’t have to cross either river to get ‘A list’ agency talent,” he said

“There are a lot of people who still go to Philadelphia and New York to source their agencies. Because we are not an all-in-one/full service agency, we are partnership-friendly, and it is a joy for us to partner with other subject-matter experts in the state. Everything we do together helps build awareness of the talent right here and how it can serve the tech community.”

The founders started By & Large to be a network model agency, as opposed to an all-in-one shop. The company focuses on the pieces of the business it has expertise in: content, campaigns and everything related to them. That includes paid media campaigns on social media platforms.

“We have a unique specialty in that sense, in that we don’t build websites and we don’t do large production shoots entirely in-house. We partner, very transparently for our clients, with other agencies.”

By & Large has collaborated with a number of creative companies in the state. “One of our first partnerships in New Jersey was with Grey Sky Films (Rockaway), a video production agency. We worked with them to do a large-scale production holiday campaign” called “Home for the Holidays” for Ashley HomeStore. For the campaign, By & Large supplied video content and social media content through Facebook and Instagram.

“Very quickly after that, we started working with Ty Fujimura, of Cantilever, which is a Ridgewood, New Jersey, strategic Web development firm. We worked together to create the website advertising.weather.com. That is the online media kit for The Weather Company and all of their ad offerings.” The Weather Company is now part of IBM, and offers advertising and analytics powered by IBM Watson (Armonk, N.Y.).

“Everything you see on that site, including the look and feel, animations, copy and content were By & Large efforts,” Field said. “The website itself was a Cantilever product. We collaborated to create a strategic vision for our product within our own disciplines. Cantilever developed the website and we designed the core look and feel and created all the content.”

By & Large and Cantilever are also partnering with beer startup Fizzics, located in Wall. Fizzics makes consumer technology that brings the taste of beer on tap into the home. “They appeared on Shark Tank and did a deal afterwards with Lori. We are working with them to increase their share of voice, their audience size, and their sales via social media ad campaigns on Facebook and Instagram,” Field said. There is also a new online store, at store.fizzics.com, which was a Cantilever and By & Large collaboration.

Fizzics is exciting because it is a completely New Jersey success story, Field said. “Everything that By & Large does and everything that Cantilever does increases the success for Fizzics, a New Jersey-based business.”

By & Large has also been working with Roy LaManna, cofounder and CEO of Vydia, located at Bell Works, in Holmdel. Vydia is a funded startup that empowers creators to manage and monetize all their video content on one platform.

“We met Vydia through the TEDxNavesink [now “TEDxAsburyPark”] community, which we’ve been a part of for the last few years,” Field said. LaManna was just about to close his funding for Vydia, and told Field that he wanted to work with them when he did. “The first thing you will see on their website is the video we helped to create for this year’s SXSW. We went down to Austin with them, as they were present at that trade show. We were really excited to unveil that video down there. We are continuing working with them in some additional online marketing efforts as well.”

By & Large doesn’t work with startups until they are far enough along in their evolution, and that often means when they have funding to spend on scaling their brand. “Our greatest strength is in creating large-scale brand thinking for brands that are reaching for that next place. They need the kind of creative thinking that would come from the large agencies we all left. But we have a lower overhead in New Jersey, and we are able offer a really strong value to those clients who want core video content that can easily be expanded into paid social campaigns.”

As a part of the TEDxAsburyPark IDENTITY conference in 2017, By & Large worked with Holmdel-based Atomic Veggie Studios to cocreate a virtual reality gallery for sharing TEDx videos that resonated with the event’s theme of IDENTITY. Users were transported into an immersive VR gallery that allowed them to select one of nine talks from around the U.S., Port of Spain (Trinidad) and the U.K. Surrounding the on-screen talks were immersive 360-degree visuals of the TEDxAsburyPark venue.

By & Large says that it keeps up with social marketing trends through weekly conversations with Facebook, Instagram, Twitter and Pinterest; and the principals regularly talk with people at YouTube and Snapchat. The team has also traveled to California and Texas to meet with representatives at Google Analytics and with social media companies. “We have senior experience, and our clients get ‘white glove’ interactions that they might not get with other area firms,” said Field.