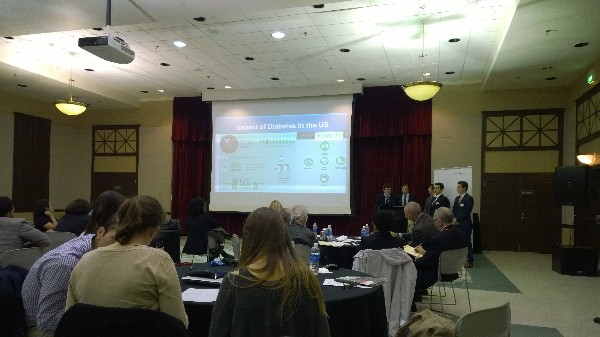 A team pitching at the Rutgers Idea-thon | John Critelli

Fourteen teams pitched their ideas for improving healthcare access to underserved New Jersey residents during the “Healthcare Delivery Idea-thon” competition, held on Oct. 27 at Rutgers University’s Douglass Campus, in New Brunswick. The contest was open to Rutgers University students, employees, and staff members, and to people unaffiliated with the university.

The Idea-thon was coordinated by Rutgers University and two other organizations—the Nicholson Foundation, which seeks to reform delivery systems of health and human services in New Jersey’s vulnerable urban areas, and Health 2.0, which promotes new healthcare technology internationally.

It is often difficult to gain support for healthcare technology without proof that it works, said Alicia Davis, a challenge manager at Health 2.0. She added that “what we wanted to do was provide an environment where people can [pitch] their concepts” and work with Rutgers to develop them further.

The three winning groups each received $5,000, as well as an advisory meeting with the organizers, to help them develop their ideas. Two of the three winning projects were healthcare-related apps.

The winning teams can go on to participate in a challenge competition in April 2015. Winners of the April challenge, which is also open to people who did not participate in the Idea-thon, will receive $50,000 to develop a year-long pilot program for their ideas.

“Copernicus,” an app intended for diabetes patients, would help users track health metrics and remind them to take or refill their medication. The app would also give users reward points for meeting certain health-related goals, allowing them to become eligible for cash rewards in the form of VISA gift cards. Copernicus would also include quizzes to keep patients educated about their health.

Another winning team proposed an app called “CareGoggles[j1] ,” which would help patients find the local medical and dental clinics best suited to their particular needs. Additionally, it would identify nearby events such as free screenings, checkups, support groups and HIV testing.

The third winning project, called “Health Literacy Through Testing,” would identify what patients need to learn by giving them a series of questions while they’re in their doctor’s waiting room. These series would include general questions on health, as well as specific questions on the patients’ medical conditions.

Additional technology-related projects included Medymology, a website to educate people about the origins of medical terms, and rightforme.com[j2] , a website that helps gender and sexual minorities find healthcare providers with whom they could feel comfortable. Another team, composed of analysts from Rutgers Robert Wood Johnson Medical School, pitched an application designed to integrate a patient’s medical data from a variety of sources.

The pitches were judged on their creativity, impact, feasibility of implementation, and the project business model’s sustainability (plus cost effectiveness, market potential and scalability). Participants also had to present their proposed methodologies and metrics for measuring their projects’ success.

Each team included at least one member from a school or institute in the Rutgers Biomedical and Health Sciences (RBHS) division, and one member from elsewhere in the Rutgers community. This is because the Idea-thon was partly intended as a way to facilitate interaction between the RBHS division and other faculties at Rutgers University. Many of the schools within the RBHS had been part of the University of Medicine and Dentistry of New Jersey until they formally merged with Rutgers, in July 2013, so this interaction was designed to bring the community together.

Mofei Lu, a student at Rutgers Robert Wood Johnson Medical School who worked on the Health Literacy Through Testing project, pointed to the presence of working healthcare professionals as one of the rewarding aspects of the event. “Just sitting here and hearing all the ideas that different people in the community have,” was beneficial, Lu said.

Even the teams that did not win were able to gain helpful experience from the competition. “What we found rewarding as a group was the fact that we were able to hear our ideas out loud and see people react to them,” said Hector Maldonado, a Rutgers biomedical engineering student whose team proposed a noninvasive method of detecting glaucoma.

This meeting was the second of the two-part “Idea-thon.” The first meeting, which took place on Oct. 13, had invited participants to form teams and learn about New Jersey’s healthcare landscape.