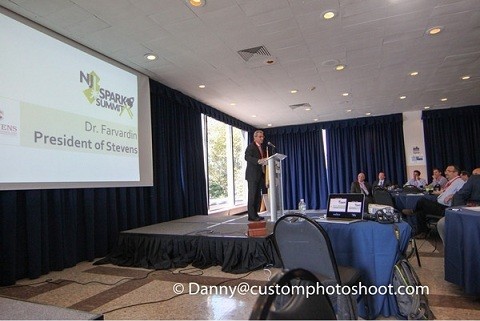 Stevens president Nariman Farvardin addressed the 200 plus attendees at the NJ Spark Summit in Hoboken.  | Danny@Customphotoshoot.com

Touted by organizers as an “unconference for startup awesomeness,” this year’s NJ Spark Summit (Hoboken) on September 13, 2012, lived up to expectations, with more than 200 attendees treated to a full day of useful, inspiring information.

Conference attendees heard from everyone from the president of Stevens Institute of Technology to the mayor of Hoboken to experts on startup law, customer acquisition, raising capital, company culture and everything in between. Able to network with each other at breaks, they were left exhausted but feeling that it was a day well spent.

The organizers, Aaron Price, of NJ Tech Meetup and crafterMania; Amit Baria, of ND20 and Rent Revolution; and Bret Morgan, organizer of Jersey Shore Tech Meetup, Bands on a Budget and the coworking space Cowerks (Asbury Park), put on quite the show.

In their intro, they said the summit was meant to “provide that spark to light a fire under our beloved state’s determined doers, eager creators and game changers.”

Setting the tone for the day, Stevens Institute of Technology (which was hosting the conference) president Nariman Farvardin told the group about his enthusiastic support for entrepreneurship.

“I think we all have an obligation to instill this culture of entrepreneurship in our younger generation and create an ecosystem that supports them and facilitates companies’ growth,” Farvardin said.

The OIE will continue to support activities — such as technology transfer, commercialization and licensing, and enterprise development — that connect Stevens to the larger world, Farvardin said.

Farvardin touted Hoboken as a tech town, saying entrepreneurs are a special breed of human being attracted to good food and coffee who need to be surrounded by other entrepreneurs. They also need an outside source of energy and are restless and not content with the status quo, he added.

“I believe Hoboken is a very suitable place for entrepreneurs,” Farvardin said, filled with young people who have a high level of energy and education, near “one of the most magnificent metropolitan areas in the world with a fantastic technology university.” He added, “I am hopeful that with all of this, in the years to come we can make Hoboken a technology hub for all of New Jersey and for the greater New York metropolitan area.”

Continuing with this theme, the summit welcomed Dawn Zimmer, Hoboken mayor, as its luncheon speaker. Zimmer said the city believes “we are extremely well positioned to develop Hoboken as part of a tech center.” Hoboken’s location, café and restaurant culture and great entertainment options will attract entrepreneurs to the mile-square city, she said.

In particular, she noted, “We are very excited to partner with NJ Tech Meetup for what will possibly be the state’s first technology community center,” to be located near the river. The city council — which recently authorized the space, a former café — and Zimmer envision the SparkLab community center as both an indoor/outdoor place in which entrepreneurs can work and one where families can come for programming of interest to them. The library will be part of that programming. Plans for the technology community center are still in their early days, Zimmer said.

In addition, Zimmer said, Hoboken has introduced a major renovation plan with NJ Transit for its terminal and rail yards that will include commercial space. “My contribution to this was to ask the state for space for a startup business accelerator,” she said, adding, “The governor has done a great job of keeping companies here, but I am trying to convince the governor” that “you need to give more resources to create an ecosystem and support structure” for new companies.

Zimmer also praised NJ Tech Meetup, which now has more than 2,200 members. She noted that Social Bicycles (New York) a company that had presented its new idea about bicycle sharing at the July meetup is working with Hoboken to develop a bike-sharing pilot, and she offered to entertain ideas from other startups.

This is the first in a series of articles about the NJ Spark Summit 2012. Look for additional articles soon.

Previous: Tech Companies Should Offer Benefits Early in Their Life Cycles
Next: NJIT Roundtable Asks What Skills Will Get IT Professionals Back to Work