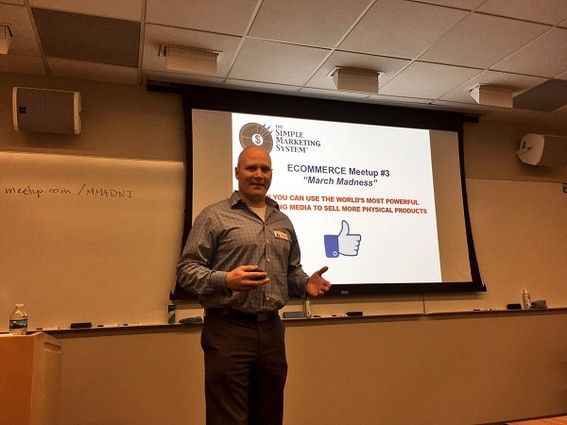 At the March eCommerce meetup, which took place at Microsoft’s offices in Iselin, Chris Spaulding, creator of the Simple Marketing System (Belle Mead), gave owners of small e-commerce sites pointers on how to effectively use Facebook ads to drive buyers to their platforms.

The meetup also featured Atiq Hashmi, founder of MobileXoom(Newark), who provided information about tools that e-commerce companies can use, and UPS New Jersey representatives, who spoke about how a great returns policy can generate repeat business.

Nick Landry, senior technical evangelist at Microsoft, was on hand to describe the tools that Microsoft makes available for free to new startup businesses in the state.

Organizer Dennis Harabin started the meeting with some news about this meetup, which appears to be the only one in the state aimed at small businesses with the potential to become economic engines: The organizers had applied for and received 501 (C) nonprofit status.

From now on, the meetup will operate out of Kean University’s STEM building, in Union. “The goal is to share and grow the New Jersey community to become one of the leaders in e-commerce,” Harabin said.

The group leaders had also designed a cloud platform called “Cottage2Cloud,” where not-for-profit companies can sell goods, and where “we will be showing, testing and using” e-commerce tools talked about at the meetings.

Spaulding started his talk by saying that companies are often skeptical about whether customers can be found on Facebook, but “almost 100 percent of the time” they are there. A billion people log into Facebook every day, and they spend an average of 20 minutes on the site. Moreover, customers who have money to spend are on Facebook, he said.

See a clip from the meetup here.

E-commerce store owners sometimes find the technology for running Facebook ads to be overwhelming, but Spaulding cautioned them not to “get hung up on the technology.” While the technology is amazing, he noted, it’s really the fundamentals of marketing that will make their ads work. “If you struggle a little bit with the tech side of things in the beginning, after a couple of hours you’ll be pretty comfortable with the Facebook technology.”

The formula for effective marketing includes knowing whom you’ll be placing your ads in front of. If it’s not the right market, you’ll be wasting your ad budget. “Facebook is a medium that allows you to laser-target the specific audience you are trying to reach,” said Spaulding.

Also, you need to make a compelling offer. Spaulding referred to Microsoft’sBizSpark offer as a good example because it enables certain startups to get all the tools they need to start their businesses for free.

Finally, your offer has to be articulated in a way that is appropriate for your particular audience.

“Successful Facebook marketing starts at understanding your ideal prospects at a deep and emotional level, better than they understand themselves,” said Spaulding.

He warned participants that they need to put in some money into testing different campaigns. “Chances are the first campaign that you test is not going to knock it out of the park. You need to get data from your tests. You need to have a decent-sized budget, at least a couple of hundred dollars to get started.” Later on, he noted that if you can acquire a customer at a price that makes economic sense, it will be worth it.

One of the elements that can vary and be tested is the audience; different audiences should be tested, and the results compared. If you find an audience that works well, try to beat that, Spaulding said. It’s also important to test different images, because that’s the first thing readers see when they scroll down their newsfeeds. He recommended testing different ad copy and different offers. Quoting a mentor, he said, “If people aren’t clicking on your ad, not opting in, not buying your service, it’s probably because your offer sucks.”

Spaulding advised the group to model different high-conversion landing pages because, when the reader clicks on a Facebook ad, where he ends up is important.

“There are specific elements that landing pages should have if you want them to convert,” he noted. “You should start to test different landing-page designs right off the bat,” once you’ve gotten some ad test results.