There is still time to view their video online at Samsung.com/solve and vote by Friday 11:59 p.m

So many kids walk to and from school on streets that are crime-ridden, and many adults have tried to figure out how to solve this problem.

But now some students in the gifted and talented program at the John P. Holland Charter School (Paterson) have come up with a solution. And they have submitted it to the Samsung’s Solve for Tomorrow competition. The contest asks students and their teachers to use their skills to solve real-world problems that affect their local communities.

The group’s solution is an app that features a “panic” button that students can press to alert authorities when they are feeling unsafe, but also sends information back to the school when the student deviates from a preset pathway home, whether or not the student has pressed the button. The idea, according to the students who created the app, is that anyone deviating from his or her set course is probably not doing it voluntarily.

NJTechWeekly.com talked to the students and their teacher, Jaclyn Hoogmoed, who orchestrated this effort. According to student Axel Salcedo, the group thought about exploring one of three areas for the contest: safety, drugs or pollution. They took a survey of the middle school students at John P. Holland, and found that 44 percent of them said that they felt unsafe walking to and from school, so the group decided to address this problem. They partnered with a nonprofit called Safe Kids New Jersey (New Brunswick) to learn more about student safety issues.

Another student, Sha’kiyra Wood, said that the group brainstormed, and then put together their ideas for making an app to help students who felt unsafe. The first idea was the panic button, which Salcedo said Wood had suggested. Salcedo added the idea for the route-divergence feature “because you don’t always have time to press a button.”

After the group submitted their idea, they became state finalists and were chosen to move on in the competition. They won a tablet computer from Samsung, which was to be instrumental in their ability to continue in the competition.

“Coding our app was very complex,” the students said in their video. They had to be able to program the latitude and longitude of where students were walking. In addition, as Deleon said in the video, “We worked on creating a delta in our formula that was precise enough to know our exact location, while allowing room for us to be on either side of the street.”

Jaclyn Hoogmoed, who teaches the gifted and talented classes, said that Fairleigh Dickinson’s computer science instructors were a big help. Alisa Shupak, supervisor of math/science, agreed. “They gave us a class on some of the aspects of coding which we didn’t know,” she said. “They helped us with anything we were stuck on.”

Shupak added, “Over the summer, I had taken a course in coding and computer science at Fairleigh Dickinson University that was sponsored by Google.”  While she was there, she met some computer science professors and made connections for the gifted and talented group.

As part of the competition, the students had to make a video showing how they actually went about making their app and the problem it solved. They used the tablet they had won from Samsung, said Hoogmoed. “The kids were really involved in making the video.”

According to student Bryana Peralta, “Individually and in different groups, we recorded us making the app and how we worked as a group. We had three different teams.” One team made the help button function, another worked on the design to make it easy for students to use, and another team worked on the route tracking. “We had to make the app recognize when a student wasn’t reaching his or her destination in a set amount of time,” Salcedo said in the video.

“We recorded us individually working to make each piece. …We even took footage of Axel that incorporated the experience,” Peralta said.

Student Rensford Greene said that when representatives from Samsung came to the school, they tested the app both inside and outside the building, entering in a route and destination to see if the application worked.

Student Haziel Marrazini summed up the group’s experience: “Throughout this time, we worked pretty hard, but it was a fun experience. We learned how to calculate the delta, how to work with tiny databases, and coding. I’m really interested in this now. I might want to have a future in this.”

721 More posts in Around New Jersey category
Recommended for you 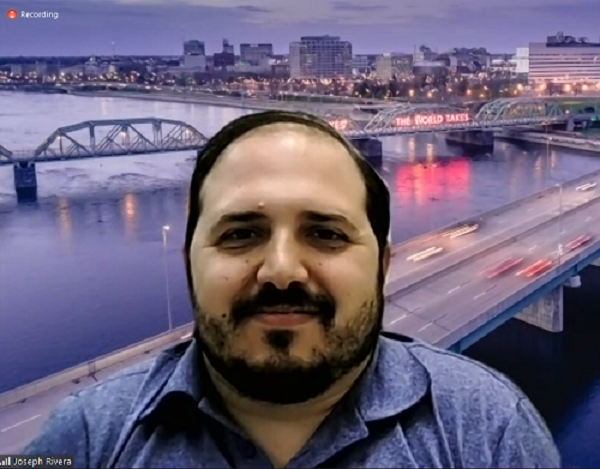 Like many cities in the U.S., Trenton is frequently under assault from phishing schemes and...