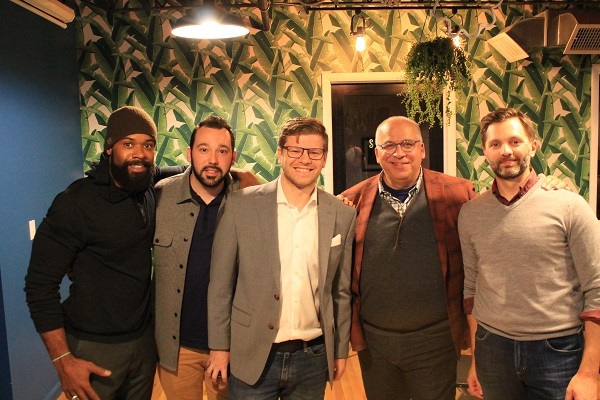 A drastic, perhaps irreconcilable, dichotomy between two schools of thought exists regarding cryptocurrency.

One school believes that cryptocurrencies, such as Bitcoin and Ether, are the inevitable result of technological innovation and should be wholly embraced for their ability to reduce friction in business transactions and to reduce the cost of capital. The other expresses concern about the negative impact of cryptocurrencies on state sovereignty, including the ability of countries to control and regulate their money supply.

A resolution between the two may be on the horizon, as the Securities Exchange Commission (SEC) and government agencies in other countries take regulatory action.

At the November 16 Jersey Shore Tech Meetup “Cryptocurrency & Initial Coin Offerings: Wave of the Future or Death by Regulation?” a packed house of 50-plus people with standing room only considered this dichotomy. The event took place at Cowerks’ freshly renovated offices in Asbury Park, which are also the home of Jersey Shore Tech.

The speaker for the night was David J. Sorin, a managing partner of the law firm McCarter & English and cochair of the firm’s Venture Capital & Emerging Growth Companies  practice. He focuses primarily on privately and publicly owned startup, early-stage and tech-enabled companies.

Many financial professionals, politicians and lawyers are in the nascent stages of figuring out how blockchain technology works. And a lot of the time, according to Sorin, the answer is “I dunno.”

Regulations that will be coming over the next few months will have enormous consequences for virtually every industry and for our day-to-day lives, Sorin said. Whether the aftermath will be good or bad remains to be seen, he added.

During his talk, Sorin described how his firm was approached by a venture capitalist (VC) who made over 100 million on bitcoin investments. Sorin said, “the VC goes, how do I take into account estate planning with my crypto  [currency] investments?”

In other words, ‘is my bitcoin considered a taxable asset because it is technically my property and if I didn’t report this income on my tax return would the IRS get involved?’

So Sorin called up some colleagues who specialize in estate planning law, and asked them those questions. And he received that same answer: “Dunno.”

Although there are plenty of “I dunnos” around the topic, here is what we do know:

What’s the Bit, Where’s the Coin, and How Are They Joined?

Sorin briefly reviewed the history of cryptocurrency and how the technology works, noting that “cryptocurrency transactions are anonymous, secure and essentially frictionless.”

First came Bitcoin, and that was followed by many others, among them Ether. According to an article about Coin Desk, both Bitcoin and Ether are digital bearer assets, similar to securities issued in physical form, like bonds.

“Companies are creating their own cryptocurrency in the form of virtual coins or tokens, which, in turn, are sold to investors for a fiat currency such as U.S. dollars,” Sorin said. These investments may be traded, and can increase or decrease in value. The existence of these currencies is possible through a technology called “blockchain.”

This technology removes or dramatically reduces the role of the middleman (e.g., the bank or the hedge fund manager), and allows individuals the freedom to be their own investors.

Crack Down on Initial Coin Offerings

An initial coin offering (ICO) is the cryptocurrency equivalent to an initial public offering (IPO), that is, when a company can be publicly traded on an open exchange.

The first efforts towards making cryptocurrencies mainstream and accessible are already taking place. For instance, the Delaware Blockchain Initiative was established in September as a place where ICOs can be publicly traded.

Widespread acceptance of anything tends to follow money flow. In the first quarter of 2017, the aggregate cryptocurrency market cap hit all-time highs of $25 billion, when every top-ten asset rallied and more money was invested in ICOs than in traditional funding. As a result of the cryptocurrencies’ higher security and reliability, leading to less friction in transactions, Sorin said, “the ICO is a venture funding dream.”

“Cryptocurrency is the new game in town for funding ICOs,” Sorin said. “There are even groups from traditional bulge bracket investment banking firms establishing cryptocurrency hedge funds and other financial services to bring financial discipline and professionalism to this growing market.” There are many individuals taking advantage of the situation, but not so many institutions or organizations, Sorin added. Then he asked, “Will this become a bona fide, mainstream way to raise funds?”

That will be determined by what regulations are passed in the coming months. The SEC is beginning to give facts and circumstances tests to all tokens (as in last month’s SEC v. REcoin Group Foundation, LLC et al.), in order to determine whether they should be considered securities or not.

Sorin believes that, during the next five years, whatever regulations are passed will most likely require revisions if they don’t fail outright. But the ongoing process of testing and learning, of seeing what aspects of the laws don’t work, is just as important as passing laws that seem to work right out of the gate. From a historical perspective, he said, policy has always been reactive to the economy.

Sorin highlighted some of the disruptive tendencies of blockchain in the financial markets, but the applications of the technology are so vast that virtually every industry is susceptible to change. The adaptation of blockchains to the mainstream “is not an if, it’s a when,” he said.

Despite all of the positive energy around crypto, there are high risks involved when investing in this highly volatile market. This past September, China banned bitcoin, and the stock fell by 10%. Although there is a lot of opportunity for crypto investors: Buyer beware. (Sorin delves deeper into the risks of regulation in this article).

From Generic Acceptance to Esoteric Contemplation

After some short remarks about cryptocurrency and securities law, Sorin opened up to the crowd for questions. And that’s when the conversation really took off.

People asked: Would more regulation just incentivize the technology to become more anonymous? How would you define a token (or bitcoin) outside of securities law? How do you tax people when you have a system of earning money both anonymously and digitally?

“Most of the answers are hypothetical at this point. It’s the Wild Wild West,” Sorin explained with a smile. “The viability of crypto will be directly determined by how governments react to this.”

The spark of energy and passion in the room was clear. The audience was a patchwork of various professions and interests. There were investors, lawyers, bitcoin miners and programmers, all enthusiasts for the mysterious future of blockchain.

“If Google or Apple created their own currency, it would be bigger and more influential than the currencies of most nation states,” said Sorin. “Then what happens to the sovereign power of the nation state?”

After Sorin’s closing remarks, the audience erupted into multiple conversations that addressed the possibilities for cryptocurrency from different perspectives.

Although the dominance of cryptocurrency and blockchain may seem distant, the repercussions of the foreseeable regulations will likely keep the discussions about this issue relatively grounded. For better or for worse.

Previous: iCIMS Moves into Bell Works, Marking Milestone for Company and Building
Next: Murphy Goes All in on Technology as Means to Rehab NJ Economy