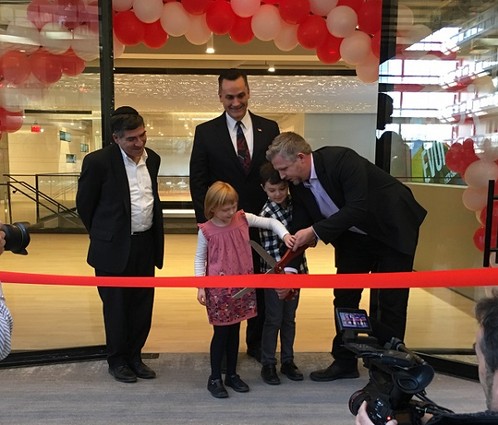 Software-as-a-Service company iCIMS moved into a beautifully renovated space at Bell Works on November 20, and hosted an official ribbon cutting for employees, the press and friends of the company.

iCIMS has taken up an entire tower in the Bell Works building, and its presence as an anchor tenant will help Bell Works fulfill its potential. Bell Works was the former AT&T Bell Labs site, which sat vacant for many years. It’s now full of life, and has been called a “tech mecca.”

Also moving in shortly are the Holmdel Library, a Montessori school and some additional food options for the occupants. The building is 70 percent rented, an achievement many thought they’d never see.

Employees in red iCIMS shirts flocked to the ground floor of the Bell Works building just outside the company headquarters, as Colin Day, CEO of iCIMS, Ralph Zucker, president of Somerset Development (Holmdel), and the mayor of Holmdel offered some remarks.

It was the employees’ first day too, and many of them needed directions to get to their offices. The company moved in more than 600 employees from its former Matawan location.

“It was two or three years ago when we came to see Bell Works for the first time with Ralph Zucker. It was in a little bit of disrepair at the time. Let’s say that there were buckets catching water,” Day recalled.

“But Ralph had an unbelievable vision for this building and he walked us through, talking about this “metroburb” and this city that would come alive with businesses on top and retail down below. And you could just feel his passion for this building. You knew just by that, that this was something worth becoming a part of.”

Day didn’t know at first how much drive it had taken for Zucker to push this through, but found out by reading a recent comprehensive article in the Asbury Park Press. “This was a project that probably wasn’t meant to happen, but Ralph pulled it off. Everyone knows how critical passion and drive are to iCIMS, and Ralph has that in spades.”

Speaking to the group, Zucker congratulated his team, which worked “tirelessly together on his crazy vision.” Zucker added that Eero Saarinen, who designed the building, said that you always design a thing by looking at its environment: a chair within a room, room within a building, a building within a city and a city within its environment.

“That has been our approach here at Bell Works. We always try to look at the greater good and what is our place within the environment … most importantly the people environment.”

Also important to the building’s success was Gregory Buontempo, the mayor of Holmdel, whose active and enthusiastic participation Zucker praised.

Buontempo welcomed iCIMS to the space and noted that “there is probably no other 500-acre campus in the country, and maybe the world, that has done more for technology innovation than this campus; and it’s fitting that iCIMs moves in and takes its place in this building in the town of Holmdel.”

Day mentioned two iCIMS employees who were instrumental in making the move happen, Len Carella, vice president of infrastructure and shared services, and Deborah Walsh, workplace services executive. Carella had worked so hard that he nearly passed out from exhaustion.

Walsh had worked on the design part of the undertaking.  Day noted, “I probably gave you the worst guidance. I say ‘modern, minimalist’ and it looks like an Apple store.” He invited the attendees to have a look around and see the details and lighting. “We tried to pay homage to Eero Saarinen and modernism,” while creating an up-to-date work environment.

Day reflected on how far iCIMS has come, noting that the company wasn’t an overnight success. “We started in a dentist’s office in Hazlet, New Jersey, and we ended up splitting a dentist’s office with Comrise. We became successful enough that we took our own dentist’s office, a second, then a third dentist’s office and there was great pride in knowing we were the top dental practice in the area,” he joked.

Five or six years ago, the company moved to Matawan. “We couldn’t imagine when we moved into there that we would outgrow the first floor, then the building and then another building. We had a tremendous ride there. But here we are now taking a whole tower in Bell Works.”

He added that the company never sees a move such as this as its destination. “This is not a destination or a sign that we made it. We have a long way to go. This is a launching pad. This is where we start the next leg of our growth. We have a lot of growing to do. I don’t know if anyone has noticed, but there are two more floors up there. We have to grow into that and some beyond that.”