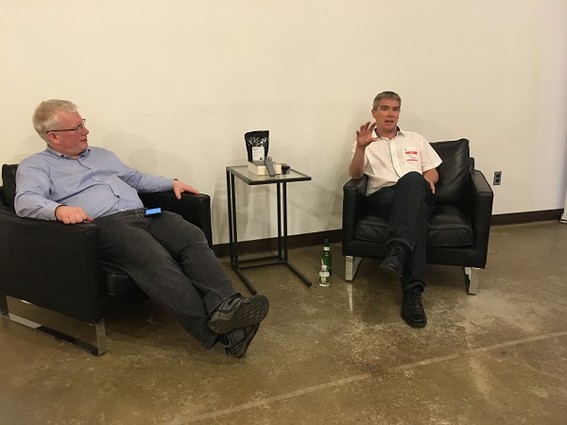 Simon Hopkins knows a thing or two about running tech and tech-service businesses. Before he became an angel investor with New York Angels, Hopkins, who lives in Princeton, was a successful entrepreneur who led some very fast-growing companies.

An electrical engineering graduate from Imperial College, London, Hopkins started his career with Andersen Consulting, now Accenture. Three years later, Hopkins joined a startup that went on to have an IPO in the U.K. in the mid-1990s. Soon after that, he opened offices for the newly listed company in Malaysia and Singapore, growing the business to over 100 staff and $12 million in revenues within five years.

He was then handed the challenge of running a post-dot-com business in the U.S. Rather than let the business fail, Simon led a management buyout and sold the new venture 18 months later. As COO, he had grown the business to over $200 million in revenues.

At a Startup Grind Princeton meeting in July, Hopkins gave the audience some insights into how he had accomplished all that during a fireside chat with organizer David Stengle.

He also gave some valuable advice on how to hire employees when you are in a company with a fast growth trajectory.

“Experience can be taught, but attitude cannot,” Hopkins said. “You have to hire people with the correct attitude! I used to tell people that, Monday through Friday, they were ours. Saturday and Sunday, we want you to have a life. But come to work on Monday and give me 110 percent all week. We tapped into something with that [message].”

Also, when a company is growing very fast, people recognize that there are opportunities for everyone, he said. “If you want to go out and grab something, you go out and grab it because no one is going to stop you. There is that much momentum in the business.”

If you “find bright young people with the right attitude, you provide workforce training.” In one of his ventures, which he started in Malaysia, he hired bright local college graduates with the promise that he’d fly them back to the U.K. for training. He found that his company had first dibs on the local talent because it offered this training and a chance to see another part of the world.

Hopkins gave some advice about angel investing to those attending. Asked by Stengle how he chooses his investments, he said, “It’s not a cliché that you invest in the jockey and not the horse, for no other reason than that the business challenges the startup will face will change over the life of the company. The technology you are using to address the challenge will mature and change.” He tries to assess if the founder and the team have the wherewithal to adapt to that kind of change.

Generally, he said, he needs some kind of personal chemistry with the founder. There also has to be a great story around the founder. “Are you a doctor who spent 10 years training in a particular way, and decided that there was a better way?” he asked rhetorically.

The team is important, as well. Has the founder been able to persuade someone to give up a great career to join the startup? “If you have, that says a lot about your personal charisma and how you sell your vision to other people.”

That being said, “I don’t know that you can assemble a team and know it is going to be a success. It all goes back to attitude. They all have to be pulling in the same direction. They have to want the thing to succeed. As soon as people start pulling in different directions, you’ve lost it. It’s just too hard to make businesses work. You need people who want to succeed, and consequently put their egos in a drawer and work together to get results.”

At the beginning of his career as an angel investor, he was “seduced by the idea.” Now, “I don’t even have to like the idea in order to invest in the company.” He will invest if he believes that people will pay money for the idea. “I just have to understand it has a shot.”

All the successful people he knows, said Hopkins, didn’t aim simply to have a successful business. All of them either believed in the new product they were creating or wanted to help a particular sector. “That’s how you succeed, by making your customers successful.”

Hopkins then identified some red flags that will keep him from investing.

·       “If it looks too good to be true, it absolutely is. I made that mistake once and was seduced by the idea.”

·       He can’t see how the business will scale. People can spend months researching markets, he said. “To me, that’s a waste of time. However, in terms of the product you are proposing, I’ll ask if you have a shot at getting to a reasonably sized company.”

·       The presentation is overly optimistic. “If your profitability in year five looks like it could fund the national debt, I’m not going to be impressed.”

·       The amount you are asking for won’t be enough to get you to the next stage. “I want to know your goals for the next year, and then I assess my confidence level that you are going to get there.”

Previous: 17 Tech and Tech-Related Companies Make NJBIZ Best Places to Work in New Jersey
Next: Technology Marketing in the Digital Age: How To Source Great Content for Your Newsletter, Social Posting and more