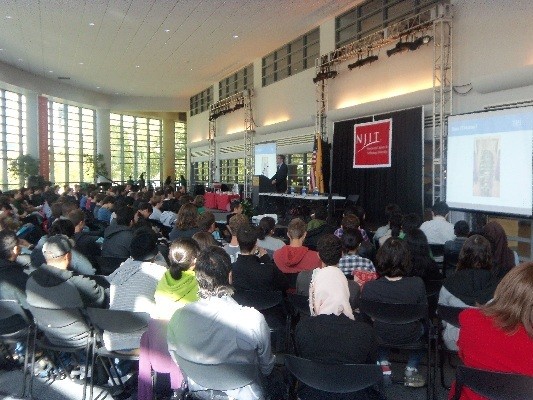 Computing in the Clouds seminar at NJIT. | NJIT

More than 200 college students and guests listened to experts and learned about the cloud at an October 10, 2012, NJIT seminar, part of the Newark-based university’s ongoing Technology and Society Forum.

The seminar, titled “Computing in the Clouds,” featured four individual presentations. The first speaker, Joe Weinman, currently a senior vice president at Telx (New York) and formerly of AT&T, Hewlett-Packard and Bell Labs, gave a rich definition of the cloud by turning the word into an acronym. He said the cloud is common, location-independent, online, a utility and on demand.

On slides filled with formulas and equations, Weinman projected the math that makes the cloud run. “The cloud is emerging, and it’s a rapidly growing industry, but it’s not just about core technology; there are some very interesting problems theoretically,” he said.

Weinman was followed by Bank of America (New York) senior vice president and NJIT alum Gilbert Gatchalian, who spoke about his previous work running websites for the entertainment industry. He presented a case study of a site he had built for a popular but anonymous reality television show.

Gatchalian said the site had encountered three challenges: scalability, flexibility and cost efficiency. He noted that predicting a site’s peak period is often difficult, and that operators have traditionally reacted with extra and expensive hardware. He said his site had to be especially flexible because the audience’s interests could shift during the show’s run.

Gatchalian said he solved the problems by turning to cloud hosting. The site was able to accommodate extra traffic without relying on more hardware. “The resources were immediately available for our expansion needs,” Gatchalian said. “We had the comfort of knowing capacity was always available.”

Gatchalian also said moving to the cloud lowered his costs. “There’s a lower cost of entry,” he explained. “For us this was a huge savings.”

But while Weinman and Gatchalian spoke about the cloud’s benefits and potential, the third speaker, NJIT computer science assistant professor Reza Curtmola, worried about security.

Curtmola conceded that the cloud can reduce costs and offer scalability and commoditization like other utilities. But he urged caution. “Data owners have to fully trust cloud service providers, and this limits the suitability of cloud platforms,” he said.

Curtmola listed several potential problems that can threaten cloud data, including power outages, software bugs, external attacks, administrative errors and poor management. He cited the now infamous stormthat disabled Amazon’s Web service and pushed popular sites like Netflix out of service. Curtmola said that in such a scenario, Amazon pays customers only one dollar for every gigabyte lost, regardless of what the data is actually worth. Curtmola said all data owners will have to assess on their own whether the cloud’s benefits outweigh its risks. “Data owners can outsource data, but they cannot outsource liability,” he noted. But he added that the academic world is working on making the cloud more secure, and that he hopes service providers will see incentives to handle data more safely.

The fourth speaker and Curtmola’s colleague at NJIT, computer science assistant professor Xiaoning Ding, echoed that hope when he spoke about the challenges of migrating to the cloud. Ding discussed the same security risks and service interruptions but underlined his presentation with an optimistic note. “I’m not going to tell you it’s perfect but that we’re going to make it better,” he said.

After the four experts spoke individually, they sat together for a question-and-answer session with the audience. Weinman responded to a question about how the cloud will affect publishing. He said the New York Times had bypassed its own IT department’s estimates of a year and hundreds of thousands of dollars to put a century of back issues online and instead added the archives through Amazon in a few hours, for only a few hundred dollars.

“There’s a paradigm shift right now,” Weinman noted, citing multimedia and the proliferation of content. “Reading words on paper is becoming as antiquated as papyrus scrolls and quill pens.”