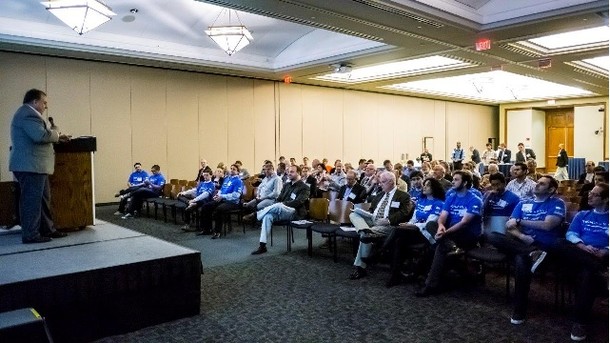 New Jersey tech accelerator TechLaunch (Clifton) introduced the companies that will make up its second LaunchPad class at an event at Montclair State University on May 14, 2013. This group of eight startups is more geographically diverse than the preceding class, with one company having founders from Finland.

As Mario Casabona, TechLaunch founder, said in his opening remarks, the objectives of the program — which was initiated by the New Jersey Economic Development Authority — are to launch 10 new tech companies each year and mitigate some of the risk for those companies.

TechLaunch provides coworking space at Montclair State University, seed capital, a business training program and access to 110 mentors. Casabona told the startup founders to take advantage of the mentors there to help them.

The members of the class, with pitches and business models yet to be molded, told their stories to a group of mentors, investors and other interested parties. The companies were introduced by Travis Kahn, TechLaunch executive director.

30 Second Showcase: This startup aims to change the way creative people — say, a wedding photographer or a designer — introduce themselves in networking situations. It has created a simple, beautiful app with which users can create and share short vignettes that feature their portfolio. The 30 Second Showcase team includes James Kaiser, Clarence Stone, Kristenelle Coronado and Christopher Zega. “We are all from New Jersey, born and raised, and we all went to New Jersey schools,” said Kaiser. “Three of us came from Apple retail, and we had a mantra there: ‘Show, don’t tell.’ … We are bringing a visual approach to the visual market.”

BeautyStat: BeautyStat is an e-commerce company that wants to alter the way women shop for beauty and cosmetics products. This team, led by Ron Robinson, a beauty and cosmetics field veteran, has been around since 2009. Robinson’s CTO is Vadim Dostman, also an experienced pro. They plan to use TechLaunch to take their business to the next order of magnitude, said Kahn. Noted Robinson, “BeautyStat is solving three huge problems in the beauty market … First, consumers are spending a lot of time online trying to find best prices … Consumers are also frustrated when they want to buy a product and it is out of stock. Lastly, consumers want unbiased advice to help them find the right new products for their skin types. Our ‘secret sauce’ is how we can scour the Web for the lowest price and then alert consumers.”

Caktus: This is the group from Finland. Speaking for teammates Heikki Sateri (CTO), Tapani Honkavaara (lead designer) and Olli Tiihonen (lead developer), CEO Panu Keski-Pukkila discussed the app, which coaches users in wellness through balanced hydration. Caktus plans to sell a smart bottle with a free companion app. The app derives data from open application programming interfaces (APIs) and creates reminders of how much and when to drink. Said Keski-Pukkila, “I’m a lazy drinker … My girlfriend is always telling me to drink more water, but I find it surprisingly difficult to keep up with the proper amounts. I wanted to change my habits, and I started to seek a solution for my problem.” The company has already applied for a patent for the application.

Hazarai: Originally an idea for a television program (think a “geek”-themed “Antiques Road Show”), Hazarai has evolved into an online social marketplace specializing in all things geek and pop culture. Entertainment professionals Ian Griggs, president and CEO, and Wayne Goldblatt, CMO, head the New York company, which has been around since 2011. “We are in the business of geek,” said Griggs. The site is for collectors and Comicon enthusiasts who don’t want to wait a whole year to enjoy their hobby. It’s where they can get their fix every day, where geeks can interact with like-minded people and where sellers can reach that audience, said Griggs. “We are looking to enhance our community sharing on our site,” he added.

Private.ly: This group met at Startup Weekend Madison and won first place there. It says its “chemistry is on fire.” The team includes Hani Shabsigh, CEO of Wayne and lead designer; Maher Janajri, chief strategy officer; and Emerson McIntyre, chief designer. “How many times have you been in a crowded room and are having a conversation on text messaging, and you notice the person next to you kind of looking over your shoulder?” asked Shabsigh. “More consumers say that privacy over security is a key issue.” Solutions out there today rely on encryption, but that doesn’t address consumers’ concerns. “All they care about is that they get that feeling that they are having that conversation behind closed doors,” noted Shabsigh. The Private.ly design hides people’s conversations and names by redacting them until they are touched by a user. The company says it won’t keep or collect any user data and will employ advanced data security techniques to meet enterprises’ needs.

Relationship Analytics Corp.: The startup’s cofounders are Greg Liebowitz, CTO, and Harry Abrahamsen, subject matter expert. The Colts Neck-based company aimed at the insurance industry, offers the cloud-based RelationshipManager. They say their analytics tool fills a gap in the customer relationship management (CRM) market by bringing predictive analytics and data-driven marketing automation to this industry. “We are providing the strategy to create a relationship-driven sales process,” said Abrahamsen. “A lot of companies spend an awful lot of money to train and recruit people, and only 20 percent last through the fourth year. … RelationshipManager helps maximize the value of every introduction and center of influence by identifying who they really are and allowing producers to scale up their practice.” The company reached a major milestone last month, said Abrahamsen, when it signed a nonexclusive license with a Mass Mutual agency for $100,000, which will allow it to pilot test the product.

ShareWatt: New Jersey native Sameer Pai, and Ashish Duggal, who has relocated to New York from Houston, are working on a hardware/software technology solution allowing an easy way of transferring battery charge among mobile devices like cellphones, tablets and laptops. “ShareWatt solutions allow an individual to locate a mobile device with plenty of battery charge available and wirelessly transfer the charge to their device,” said Duggal. “We think the market for this peer-to-peer battery solution includes the hundreds of millions of end users as well as manufacturers who make the device.”

SeekChange: Speaking for SeekChange, cofounder Ralph Vacca, who is earning a Ph.D. at NYU, explained that his company wants to “put a personal coach in your pocket.” Vacca believes that rather than consulting self-help books, people will turn to SeekChange for assistance on a daily basis. When clients visit a coach or a therapist, they are often told to take certain actions to improve their outlook or mental health. But that person isn’t always with them to remind and help them along. The company’s adaptive coaching process, based on research in neuroscience and applied psychology, will be available in app form to both individuals and coaches who want to help their clients follow through on recommendations. Cofounder and CTO Patrick Boyd has developed an adaptive conversation engine for mental health simulations, and Nicole Letelier is a life coach and marketer.

Previous: Feldstein Calls on NJ Tech Companies to Join Virtual March for Innovation on May 22 – 23
Next: Startup Entrepreneurs Need to Take Care of Themselves, Brad Feld Tells NJ Tech Meetup