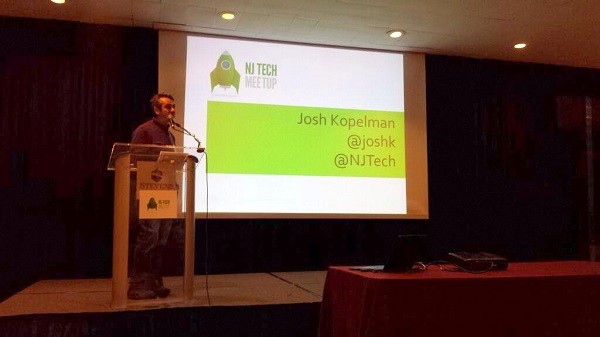 Kopelman shared success stories and offered contrarian opinions about entrepreneurship, which meetup organizer Aaron Price praised for highlighting many of the ideas the group has explored this year.

Kopelman started his first company, a homework helper called Infonautics, in 1992 while he was still a student at the Wharton School of Business. He listed Infonautics on the NASDAQ exchange in 1996, and three years later he founded Half.com, which created a resale market for books, movies and music.

Kopelman sold Half.com to eBay in 2000, and three years after that he founded TurnTide, an anti-spam company that Symantec bought after just six months.

In 2004 Kopelman turned to investing by founding seed firm First Round Capital, which Kopelman said explores more than 3,000 ideas annually out of offices in New York, Philadelphia and San Francisco. This year Forbes magazine ranked Kopelman 12th on its annual “Midas’ Touch” list.

Kopelman said he is from Philadelphia, a large city but no Silicon Valley or even Silicon Alley. He mentioned his background to show that the adage of “right place, right time” covers a much larger map these days.

“Great entrepreneurs can come up with great ideas anywhere in the country, just like great actors aren’t all born in Hollywood,” he said.

He then said he wanted to share some contrarian opinions.

First, he challenged a notion, taught by one of his Wharton professors, that successful entrepreneurs find an unmet market need.

“It took me about 10 years to realize that I disagree with that professor,” Kopelman said. “We’ve funded many companies that are not trying to find an unmet market, but are instead finding a solution to an existing market but doing it faster, better, cheaper,” he said.

For example, Kopelman’s company was one of the seed investors of Uber, the new taxi service similar to AirBnB, through which private individuals use their own cars to give rides to people. Riders can use an app to request a driver, follow that driver’s progress en route, pay for the trip via credit card, and rate drivers for performance. “Uber is about solving an existing need of getting from place A to B faster, better, cheaper,” he said.

From the Uber story Kopelman segued into another idea about shrinking markets. He mentioned how Microsoft toppled what was a $1.2 billion print encyclopedia market by adding the digital Encarta encyclopedia to its software suite. The market soon collapsed in half, but Microsoft took a larger share of it.

Kopelman further promoted his idea of shrinking markets by telling the story of Half.com. “Our whole business model was based on the fact that when people buy books or movies, they typically read or watch them only once,” he said. “We would send an email to people asking, would you like your $30 back?”

Half.com found that people are interested in reselling their entertainment. Kopelman said that a Harry Potter book would resell an average of four times, with Half.com taking $3 from every sale. The site challenged established and larger retailers that only sold new.

“That’s a really asymmetric way to compete,” Kopelman said. “We cost our competitors 10 dollars for every dollar we made but we were able to turn them in such velocity and such volume that we were shrinking the market by removing the inefficiencies.” The plan worked; a year later eBay bought Half.com for $350 million.

Kopelman dispelled one more myth, that seed investing and venture capital are the same. “The goal of venture investing is to take a business and to scale it, to pour fuel into the engine,” he said. “That’s not the goal of seed investing.”

Kopelman told the story of how as a seed investor he supported TechForward, which enables buy-back programs for electronics. At the time, retailers were losing traditional revenue because customers stopped extending warranties for products, such as televisions and phones, that they would soon upgrade.

TechForward thought to replace the lost revenue by creating a buy-back program in which a customer would pay money upfront for a guarantee that a retailer would buy back a product later, when the customer wanted to replace it. By offering store credit, retailers could lock customers into a cycle of upgrades.

Kopelman said that as a seed investor he gave TechForward $300,000 and asked the company first to test its hypothesis by collecting data from eight used computer stores in Los Angeles. He said that research enabled TechForward to hone its idea, and that later it was able to earn exponentially larger investment amounts from venture firms.

“At the seed stage you’re trying to run a series of experiments,” Kopelman said.

He ended his talk by opening the floor to audience questions, such as on what he looks for in a successful pitch. He said that entrepreneurs should be able to tell a story and have strong marketing ideas.

He added that he always looks for a team with a diversity of member strengths. “We’ll turn down ideas if we don’t like the team, though we won’t tell them that,” Kopelman said.