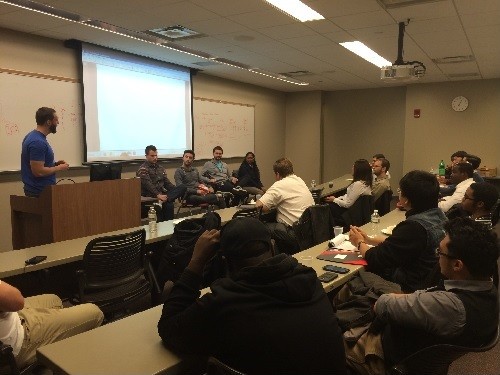 A panel of tech entrepreneurs gave advice at a Scarlet Startups meetup in Newark during Newark Tech Week in Nov. | Esther Surden

Tech founders were generous with their advice to others thinking of plunging into the entrepreneurship waters during a Scarlet Startups  meetup that took place during Newark Tech Week (November 2–8, 2013).

The group met at Rutgers Business School (Newark) Nov. 7 to participate in the presentation entitled “Starting Your Startup.” Several entrepreneurs on the panel had started their own businesses in college.

Most of the speakers had devised their startup idea during their college years. The audience was interested in how they had found their advisers, mentors and cofounders.

Currie noted that finding mentors had entailed networking and being ready to pitch at a moment’s notice. He recalled having met one of his board members at a nightclub and pitching him right there. He had been told it was a terrible pitch, so he learned to be better prepared. “After that, it was about asking friends to chat about what I was doing and asking them to make introductions.”

Saynuk agreed that networking is crucial. He sympathized with the audience members’ networking tribulations.

“When you are doing networking like this, it feels like a waste of time,” he said. “And then there’s all that emailing back and forth afterwards to say, ‘It was great to meet you.’ While it may feel like a waste of time, six months down the road one contact can fan out into many, many opportunities you never would have had if you hadn’t gone [to the event].”

Kosinski agreed, adding that when you are hustling and contacting potential advisers and mentors, “you have to give them a reason to respond to your emails, hear you out and give you good advice.” He added, “the idea isn’t important. Your passion and hustle is.”

Christian had a completely different experience than that of the others. She found her mentor after losing an innovation challenge she had applied for. She turned to Dr. Michael Ehrlich at the NJIT School of Management to identify weaknesses in her application and learned that she had been rejected for several reasons, including the need for FDA approval.

When Christian spoke with Ehrlich, she was able to describe how the device worked and how she had devised the idea after shadowing surgeons performing the operation.

“He guided me through the whole nine yards. He helped with everything from finding intellectual property protection to getting introductions to angel investors … That one person was able to make a world of difference,” Christian said of her mentor.

When asked how they had met their cofounders, the panelists had different stories. Currie knew his, Patrick Cunagin, from college but didn’t reconnect with him until after he had moved to New York. “I told him what I was doing, and during our discussions I saw he believed in it and was passionate about it.

“If other people get excited, they may wind up with you,” Currie said. “If they are proactive enough to do things to help the startup without asking, this is a good indicator that they will continue to do what is needed.”

Christian said her cofounder is a close friend who is trustworthy and has a background in robotics, both of which were essential to the project. “When I told her about the idea, she immediately got interested and just started running with it. We had an innovation competition coming up, and she wanted to proofread the presentation [and] help practice the delivery. I saw her interest and I knew she’d be a perfect fit.”

Kosinski said he is a solo founder. “I know this is pretty uncommon. It was definitely a lonely, tough single road for the first year. When there were big wins, I had no one to share them with.” Conversely, he noted, when there were lows and bad times, there was no one with whom to commiserate.

“I had looked for a cofounder and tried several people out, but we didn’t mesh,” said Kosinski. “So instead of focusing on this for an entire year, I decided to do this alone. Now we are a team of five people and it’s not so lonely.”

A couple of the panelists advised the founders to pay their bills through part-time work while the startup is getting off the ground. Saynuk, a designer, said he has used his consulting business as a way to accumulate some earnings. However, he said, if you believe in your startup, you’ll find a way to make it work. “I am a big believer in making it inevitable [that you will succeed]. There is no fail,” he noted.

Currie said, “I recommend finding a marketable skill and using it, even if it’s just a few hours a week, to pay the bills. I have a developer site, and my partner and I build websites on the side. We are lucky that it improves our technical skills for duUdeal while paying the bills.”