Home » News » Forgive Yourselves for Not Being Perfect, Chipps Tells Hacking Asbury Attendees 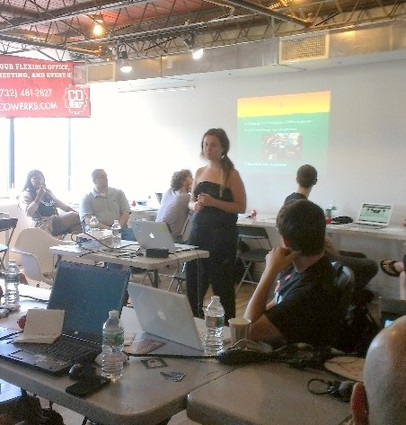 Sara Chipps, CTO of LevoLeague.com (New York) and cofounder of GirlDevelopIt.com (New York), has a message for founders and developers: “Forgive yourself for being [bad at what you do] sometimes. The ability to move on from that stuff is important.”

Chipps, who had missed her train and then left her wallet on the one she caught to Asbury Park for Hacking Asbury June 22, 2013, had that mistake fresh in her repertoire as she launched into her keynote presentation.

“The purpose of this talk is to [discuss] the ability to forgive ourselves,” Chipps said. “To walk away from these failures and say it’s alright, it didn’t work out. I’m still going to pick up my laptop. I really hope this doesn’t fail, but alright.”

Chipps had emailed her role models to ask them about failure, and she shared some of their responses with the group.

Neil Capel, founder of SailThru (New York), said he had had five big projects that didn’t work out. “The main learning from them all was, don’t try and keep a job and do a startup at the same time. Very few people can manage that to success.”

Joel Spolsky, founder of Fog Creek Software (New York), told her, “I think about 60 percent of the things we tried at Fog Creek … either failed or didn’t work very well.”

Chipps attributes any career success she has had to the ability to forgive herself and assert what is true.

“Life is all about getting to know yourself,” she said. “We have to learn [about] the things that energize us and … don’t energize us.”

Being honest about your strengths and weaknesses is a critical factor, Chipps said. If four or five people point out something to her, it usually gives her pause.

How does Chipps approach her weaknesses?

The first kind of weakness, she said, is what you don’t want to be good at — in her case, being “procedural.” She’s an ideas person who loves to build new things. “I let people know I’m going to try my best, but this is a weakness of mine.”

Chipps advised her audience to “hire around yourself. Find the puzzle pieces that work around your weaknesses.”

She deemed the second type of weakness what you want to have become a strength. For Chipps, writing software tests falls into this category. “I’ve never built an app and tested it first,” she said. “I’d like to be someone for whom it’s second nature.”

How to tackle this weakness? Create action items. Pair yourself with good test writers. Watch how they think and approach problems.

Chipps also suggested that developers track themselves. Ask yourself questions such as, Where was I six months ago, and where am I now? How am I better? It’s hard to stay motivated if you can’t evaluate progress.

“It doesn’t matter where you start, as long as you are continuously improving,” Chipps noted. She advised spending 15 minutes every day on a project. It’s a small commitment. No one has to hack things all day. Put a few minutes aside daily. Set a goal of writing, say, two lines of code per day.

Chipps’ latest passion is Arduino, an open-source electronics prototyping platform that lets you create interactive electronic objects. Knowing nothing about electronics before the project began, she was on a team that won an award for prototyping an electronic Christmas sweater that spells out in LED whatever you type.

Hand in hand with forgiveness is creating what Chipps called “antipatterns.”

When it comes to jealousy — and you will be jealous, Chipps asserted — the way she forgives herself for feeling it is by stepping back and coming up with five “super amazing” things about the people she envies. For example, “It’s really easy for him to do this because he’s brilliant,” “It’s inspiring to watch him,” and so on.

“Done” is better than “perfect,” and sharing works, stated Chipps. “We want people to be impressed,” she said, noting that had she introduced her work to people earlier on, they would have made suggestions that improved the product before she invested a lot of time in it. Her conclusion: sharing accelerates improvement.

Another thing Chipps suggested is not keeping score by comparing yourself to what other people were doing when they were the same age. It’s never too late.

She said her favorite Girl Develop It students are in their 60s and 70s, because they always form study groups, they are the only demographic whose members find each other and study during the week, they are completely fearless and they are doing this in their free time.

“I used to give up really quickly,” Chipps admitted. “I was a pretty poor student in general. I never studied and I never did homework. I could do great on tests and I never failed a class.”

When she took calculus, however, she failed one for the first time. So she retook the class, still doing no studying or homework. The teacher finally told her, “It’s OK. My husband is like this. Some people are just not cut out for the harder maths and sciences.”

For the next three weeks, Chipps did nothing but calculus. She got As on her finals and passed the class. The bigger lesson: “If I had just admitted to myself that I might be bad at something, it’s OK. I may need to work a little harder. [I needed to] just kind of forgive myself for being bad.”

Chipps’ route to coding was serendipitous. She was homeschooled and ran a bulletin board service as a way to meet people and talk to them.

“I am still part of the generation who became software developers because they were losers,” she quipped. Girl Develop It has instructed about 1,000 girls in the art of coding.

And that is very cool.