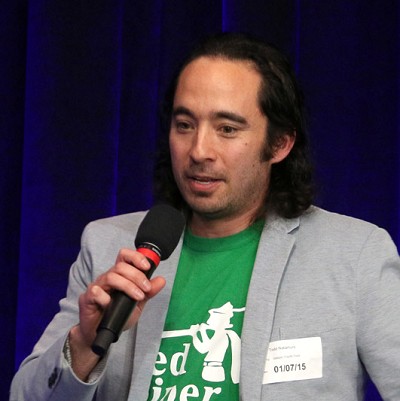 Social Media is full of data. There are approximately 500 million tweets per day, 300 million Facebook photos per day and 500 hours of videos uploaded to YouTube per minute! That is an awful lot of data!  Mining that data can be advantageous for cultivating and expanding existing relationships with customers, finding potential new customers, or developing business-to-business relationships or relationships between businesses and users of goods and services.

Nakamura demonstrated an app he had developed to display current tweets about the hashtag #IWDNJ, which refers to Women Techmakers of North Jersey. After the presentation, the attendees broke up into teams, each one trying to think of potential apps to data mine for the purpose of improving their businesses.

In order for an app to work with Twitter, the app has to be registered at apps.twitter.com; this is necessary to prevent the Twitter stream from becoming flooded with traffic.  Also, a user must have authentication codes before an app can make API requests. The app returns JavaScript Object Notation (JSON) data.

Twitter provides a lot of information about its available APIs.  By going to the website, opening the “Developer’s” tab  then clicking on the “Documentation” tab, a list of  APIs will be displayed.   Click on the “API Overview” tab , and you’ll see instructions on how to use the APIs. The site includes APIs for extracting information such as a user’s name, location, followers, lists and list followers.

The site also discusses the authorization process. Click on the “Documentation” tab, and then on the “OAuth” tab and you’ll see a full discussion about authorization options.  Stackoverflow.com also has detailed explanations on how to obtain authorization for running a Twitter API.

Previous: Municipal and County IT Leaders Get Tips on Protecting Against Cyber Threats at NJ-GMIS Conference
Next: Managing Your Online Reputation