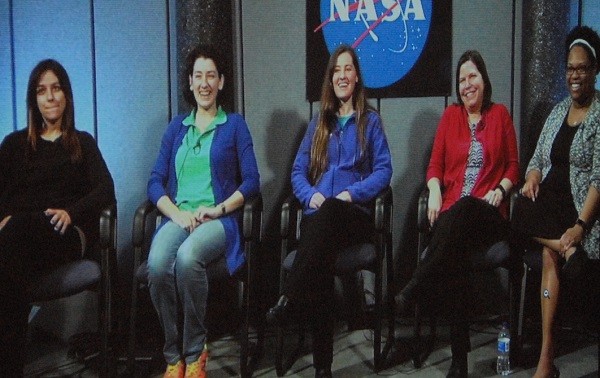 Keeping this in mind, I organized and hosted a live video chat session with women working at the National Aeronautics and Space Administration (NASA), in an attempt to inspire girls and my peers to hear firsthand what it takes to work for and become a part of a nationally recognized organization such as NASA. I believe it is very important to have female role models to look up to in the STEAM fields.

According to Forbes magazine, “Tech is about people, not technology.” Then why are only 17.9 percent of undergraduate females receiving bachelor degrees in computer science, only 25 percent of the computer science workforce female, and only 18 percent of the computer and information sciences field made up of women? Why is it that 13.33 percent of the engineers at Facebook are female, 8.26 percent at Yelp, and 12.75 percent at Pinterest? Why do only 15 percent of women in STEAM hold executive positions at companies? Why does raising a child set a woman’s salary back by 4 percent? Why does it add up to women making up way under half of the STEAM workforce? Why?

On the day of the webcast, I had linked up the projector, my computer was ready, the connection was strong, and the audience had settled in. Now was the big moment, the time to make the call. I had had a dry run a day earlier, but once again I felt the same nervousness and childlike excitement. After all, this was NASA, an organization we have all known about since we were young scientists marveling over astronauts who went to the moon! On one hand, NASA provides us with an “out of this world” experience, but on the other hand, I was about to talk to real women who were embarking on their real journeys about how they got to work at NASA. This was and still is a “WOW” moment for me!

The panelists included the manager of the Engineering and Science Department at NASA, a project coordinator, a communications lead, a technology support person, and engineers who hold leading roles. The diversity shed light on the fact that big organizations such as NASA don’t only look for people with STEAM backgrounds, but all backgrounds of study. NASA needs good communicators and organizers as much as it needs stellar computer scientists.

When I mentioned “real women” before, I wanted to stress how authentic these women and their backgrounds were. They were not 4.0 GPA students who went to Ivy League schools and were at the top of their classes.  Quite the contrary, they didn’t all have perfect scores or a top-notch education. They didn’t even overload on APs. However, they never lost their reverence for learning. They were always eager to challenge themselves, not scared to ask questions, and didn’t take the easier route to avoid failure. These women embraced it all! While enjoying extra-curriculars, participating in community service, and focusing on academics, these women were well-rounded individuals who used their passion to keep learning as their motivation to get to where they are today.

During the chat, we were able to discuss the implicit bias that is present in this male-dominated field. It was revealed by a data analyst working at the Marshall Space Flight Center that “80 percent of the time, the name ‘Jack’ will be more favorable against ‘Jill,’ despite the fact that they both have the exact same resumes.” The manager of the Engineering and Science Department elaborated NASA’s focus on diversity, inclusion, anti-harassment and equal employment opportunity. However, she also touched upon NASA’s being a government-run organization, meaning that NASA may be an equal community for all, but situations similar to that of Jack and Jill above occur mostly outside of the government-controlled domain.

To our surprise, the panelists were encouraging us to “not be afraid of failure,” “keep asking questions” and “continue to learn.” This is because they knew (from their experience) that perseverance through the tough times is what stands out and propels you further. These women have overcome many of the hurdles that females encounter when working in the STEAM workforce, but they still smile when thinking about the amazing work that they are doing. Their enthusiasm for their work is what motivates them, and continues to pull them through the most adverse of times. “Be happy with what you do” was one of the biggest takeaways from this event!

I asked the women working at NASA what they thought would’ve encouraged them to get involved with STEAM at an earlier age, and their response was: “Things like this!” They firmly believed that exposure was key, as well as following other inspirational women who were supporting them to get involved and inspiring them to reach for the stars!

Undeniably, there is an issue with women in the tech field as being underfunded and sexually harassed, but I want to continue to raise awareness amongst girls, and I urge my peers to look at the statistics for themselves.

Currently, only 25 percent of the computing workforce is made up of women, and if this continues, in 2024 there is expected to be 1.1 million computing-related jobs that will remain unfilled. I believe this can change. We can make a difference!

Let’s speak up, let’s tinker, let’s encourage one another, and let’s never give up, so we can seal the leaky pipeline, add diversity, and gain gender neutrality in the STEAM field. Let’s strive to become the role models for the next generation of pioneering women and support each other’s journeys in doing so!