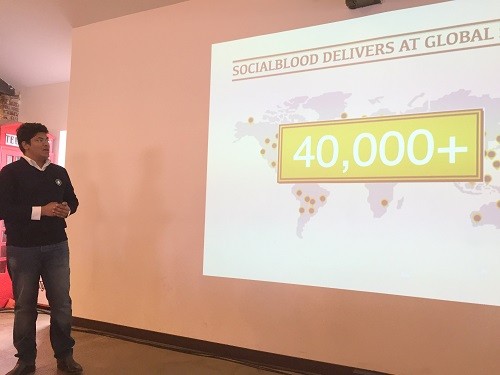 This fall’s platform companies hail from as close as Princeton, and as far away as California and New Mexico.  All of them had spent time in residence at Tigerlabs, honing their skills, learning from mentors and acquiring customers.

Tigerlabs cofounder Bert Navarrete said that 80 percent of the companies had received some sort of financing prior to the showcase, with the total amounting to $4 million.

In Part One of this two-part article, NJTechWeekly.com covers three of the participants at this event: Curate.Health, Simplifit, and Socialblood.

The app will track the progress of a patient from admission to discharge using the hospital’s information system, and will provide notifications to the patients and ask for feedback at each stage.

A patient’s caregiver can also use the app to receive similar progress notifications. “It’s hard to be a patient, and it’s even harder to be a family caregiver,” Clark said, emphasizing the complexity of providing a satisfactory patient experience.

“If you’re scheduled for a back surgery tomorrow, you’re sent a notification letting you know of your surgery and asking if you’re ready for your surgery … When you’re waiting in the waiting room, you’ll be asked if your surgery is on time or delayed, do you have new tests scheduled, are you leaving surgery.” Meanwhile, the patient’s family member or caregiver will be receiving the same updates and notifications, all in real time on his or her mobile device.

Clark announced a partnership with Community Health Systems, which will deploy the app at one division in their network of 208 hospitals nationwide. He said that if they succeed in the one location they could expand into more divisions.  In 2015, Curate.Health will include features to make post-visit phone calls more efficient. Patients receive six phone calls on average, four of which concern billing.

Hailing from Chicago, Simplifit cofounder and CEO Kevin Packer demonstrated a “mobile, personalized weight-loss program to help you lose weight and keep it off,” touting it as “the Weight Watchers of the 21st century.” Packer explained that most people who make a New Year’s resolution to lose weight end up giving up by March. Simplifit hopes to motivate people to stay on track.

The app assesses one’s lifestyle and figures out the best way for a user to stay engaged. It also serves as the user’s coach. The app offers a personalized diet and exercise plan based on a methodology of two “world-renowned” personal trainers, according to Packer. Simplefit’s user base has increased 30 percent week over week and spans 40 countries, Packer said. He added that personalized online coaching will be incorporated into the app in 2015.

The Princeton-based company Socialblood is currently “building the largest network of blood donors, hospitals and blood banks on the Web,” said Karthik Naralasetty, the company’s founder.  Some 80,000 gallons of blood are required every single day in the United States. Blood banks are always looking for donors, but if they’re looking to increase their stock of a particular blood type, they currently have no platform through which to do so.  Naralasetty said his organization’s mission is to connect the 1.3 billion people on Facebook with supplies of their type blood.

Naralasetty originally created eight Facebook groups for each blood type, and asked people to join in. He found that the people who joined were highly engaged, so he decided to create a website that brought the eight groups together. “Within a month, I was able to map 1,200 people to their blood types — and lives were being saved,” And “with $0 of marketing,” 40,000 have already joined.

The growing numbers and enthusiasm of Socialblood users drew the attention of Facebook’s executives, who, Naralasetty announced, are incorporating the platform into their Internet.org initiative.  He also announced a partnership with LifeServe Blood Center, which will mean $50,000 of revenue to Socialblood.