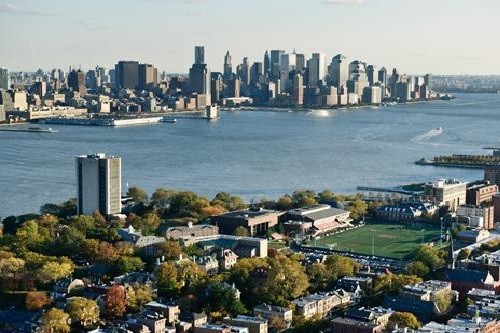 The City of Hoboken and Stevens University are collaborating on a Smart City project. | Stevens

Hoboken will soon be a smarter city thanks to the sharp minds at Stevens Institute of Technology. The school, located on Hoboken’s Hudson River waterfront, is developing a Smart City app to help the city and its residents solve urban quality-of-life problems such as air pollution and traffic congestion. The app, coming in the fall of 2013, is the first product the school is developing at its new Smart City lab.

According to School of Systems and Enterprises professor Ali Mostashari, who is leading the multidiscipline Smart City team, Stevens first approached the Hoboken city government, starting with Mayor Dawn Zimmer’s office, in August 2011.

Mostashari said the Smart City team will collect data from three sources: Hoboken and service providers such as NJ Transit and PSE&G, app users and focus groups via crowdsourcing, and high-tech sensors, to be installed in parts of the city.

“We’ve given them our data, and Stevens has really led the way on this,” said city spokesman Juan Melli. He added that the Zimmer Administration wants to become a hub for technology throughout New Jersey by building relationships with Stevens and Hoboken-based New Jersey Tech Meetup, among others. Stevens and the Hoboken City Council signed a memorandum of agreement in February 2013.

The Smart City team will install the sensors this spring with the help of IBI Group, an international engineering firm. Some sensors will be located underground and will assess parking availability and traffic congestion by measuring automobile weight. Others will hang from electrical poles and measure air and noise pollution.

Through cloud technology, the sensors will transmit data back to the lab, which the team will build this summer inside the School of Systems and Enterprises office, on the Babbio Center’s fifth floor. The lab will include a 60-inch screen with gesture technology, enabling researchers to pull and drag particular windows to display information.

The lab will then repurpose the data to help the city make better decisions on public policy. It will also design the app allowing residents to perform a number of functions, including looking for available parking spots, managing home energy consumption, contacting the police and fire departments and reporting problems, such as potholes, to Hoboken’s existing 311 response system (click here to see a rendering of the app).

Mostashari said the app will be user-friendly and voice-operated. “If you want to report a pothole, instead of going through 15 commands, just click and say ‘pothole,’ and the GPS will upload the coordinates,” he explained. He said the team is planning for the app to work on smartphones and tablets, and for it to have a text option for non-smartphones.

According to Mostashari, Stevens will pay for the entire cost of the Smart City lab for now, though it will apply for grants from organizations including from the National Science Foundation. The school has spent more than $100,000 so far on sensors and other equipment.

The Smart City team will comprise between 15 and 25 people at any given time, including undergraduate and graduate students, doctoral candidates and professors. Many of the undergraduates, led by Professor David Klappholz, will work on the team to fulfill their senior design project requirements.

The students and professors will come from departments throughout Stevens, from engineering to computer science to social sciences and others. Thus far the team has been collaborating with domestic and international groups, such as the École Polytechnique Fédérale de Lausanne an institute of technology in Switzerland.

Said Mostashari, the team plans to expand its research, including to a target list of 16 global cities with between 200,000 and 3 million people, but Hoboken is an ideal first city to try out new smart city technology because of its compact size and tech-savvy population of 50,000. “Despite the fact that it’s a small city, Hoboken acts the way a larger metropolitan area would,” he explained.

Because Hoboken has the right size and type of residents, Mostashari said you can think of it as providing a blueprint for cities to become smarter. “It’s a manageable one-mile square, and we can make the entire city a smart city,” he said. “There are few potential cases out there where we can have more than just a smart city project within a larger city that’s generally not smart, but actually a transition towards a city 2.0. This is a huge opportunity for Hoboken, and it would be impossible to do this anywhere else.”

The Smart City project comes from an ideal relationship between cities, the private sector and academia, said Mostashari. “Stevens is in this community. We need to be at the service of the community, and we feel Hoboken is a good place to do that in addition to being a really good case study.”