Home » News » If You Care About User Engagement You Should Care About Gamification, NJTC Members Told 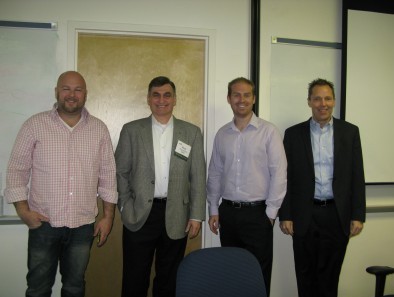 The New Jersey Technology Council (NJTC) took on the topic of gamification at an event in March which took place at Robert Half Technology, Woodbridge.

Rich Napoli, COO of ObjectFrontier Software (Alpharetta, Ga., Jersey City and Newtown, Pa.), moderated a panel before some 50 tech executives on how companies can incorporate gamification into their businesses.

Most of the attendees were gamification novices, so Gabe Zickermann, a guru on the subject and chair of the GSummit, took a moment to discuss what it is and why tech executives should care about it. He defined gamification as the process of using game thinking and game mechanics to engage users and provide solutions to business problems.

“Why do we care so much about adopting this tool?” Napoli asked.

Zichermann answered: “We care about user engagement because there are a pile of good ideas left for dead because their creators are unable to sustain user engagement for any appreciable length of time.” Gamification is one way businesses can compete for attention and level the playing field.

Attention spans have gotten increasingly shorter, Zichermann continued. Microsoft research says that 90 percent of users will decide in ten seconds or less whether a website is worth staying on, he reported. It’s more than just putting badges, a familiar way of rewarding gamers, up on a website, he warned. Gamification can’t make a terrible product into something awesome; however, using gamification tools, companies can accelerate user engagement.

Gartner Group agrees that gamification is important to business, Napoli noted, and has said that by 2016 brands will use the technique as an essential element to drive loyalty. Also, by 2015, some 40 percent of Fortune 1000 organizations will use gamification as a mechanism to transform business operations. Another major use will be for training and recruitment.

“There’s a lot of interest around this right now,” Napoli said. “However, very few people actually ‘get’ how to do this. A lot of our early attempts will be doomed to failure.”

Michael Vesey, CFO of Edison-based gaming company Majesco Entertainment, said enterprises have to realize that a whole generation of adults has grown up playing games. Games provide a feedback loop for users that tell them how well they are doing.

His company developed a Zumba Fitness game for the Wii and the Xbox platforms that measures some vital signs in people who are playing and gives them feedback about how well they are accomplishing their fitness goals, for example. Organizations that want to drive productivity should consider using these kinds of techniques, he said.

“People really do like and accept this kind of feedback,” he said.

Drew Napoli, who is studying game production at the University of Central Florida and works with ObjectFrontier as a gamification specialist, said business users can take some lessons from the popular game World of WarCraft. He noted that besides letting  users slay monsters and find treasures, the game allows players to organize themselves into groups, have meetings on how to efficiently run the group to win the game, and hold performance reviews for group members to give them feedback on how they are playing and help them improve.

“When we are bored in the real world it’s often because we are not achieving anything. Games allow players achievable successes,” he said. There are also achievable goals right around the corner and the player knows how to get there, he added. By contrast, companies hold performance reviews once a year, and workers often don’t see how they contribute to the overall success of the company. He suggested that when people have immediate feedback and a clear vision of where the company is headed they are more “jazzed by what the company is doing.”

Zichermann provided several examples of top gamification efforts. He pointed to Siemens which has a game called “Plantville” online, aimed at optimal factory management. Almost all of the people who play Plantville also run factories for a living, he said. Plantville is more exciting to them than their day jobs because it lets them play with scenarios they hope to never run into at work (think disaster recovery), he said.

“A well-designed game can extend the learning cycle for a user in a way that is totally opt-in and is something they want to do,” he concluded.

An excellent example of how a company used gamification to extend sales is Autodesk, the 3D modeling software vendor, Zichermann added. While Autodesk gave a trial period before people were asked to put down a $3500/seat charge for their specialized software, the company found that many users weren’t completing the trial. “It’s very hard to do 3D modeling. It’s complicated,” Zichermann said, so users were giving up. Yet those who completed the trial were likely buyers.

Autodesk implemented a gamification project during the trial period. If the user learned a feature, he unlocked a clue to an Undiscovered Territory. Users were competing for badges, recognition, and ultimately to win an Autodesk entertainment suite. The company raised the total time people spent on the trial by more than 40 percent and increased purchase conversion by 15 percent, Zichermann said.

A video of the panel discussion is available here.