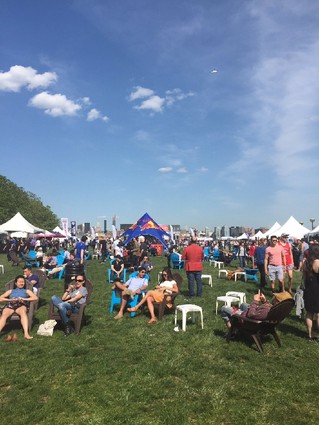 A view of the lawn at Propeller Fest
| Courtesy Genesis Media

Propeller, which took place May 20, was a premiere business festival on a pier in the heart of downtown Hoboken.

Conceived by the energetic entrepreneur Aaron Price, of NJ Tech Meetup, Propeller featured a lot of energy! Innovation was the word of the day—not gizmos and contraptions, but apps providing unique services.

Also, it was a great business networking event! Many New Jersey companies hawking their services, employing local talent and seeking talent to hire were present, and offered visitors an opportunity to speak to real live recruiters. There were lots of opportunities for contractors seeking contracts.

There were many speakers who could not be missed, and with loudspeakers strategically placed throughout the festival grounds, so you could always hear them. Typical of the competitive entrepreneurial spirit, there were two stages going at once. Sometimes, while trying to talk to exhibitors, the loud speakers could be an interference. But one could just as well relax with a beer in the many lounge chairs provided, watch the big screens and get plenty of business advice.

Almost all the speakers spoke from experience, a good thing to have when seeking solid advice. Some speakers were motivational and there was some boosterism. But most spoke on themes common to all those in business for themselves: How to promote your business. How to get your business to take off.

The answers were: You have to work hard, really hard. As one speaker said, “I expect you to be at work tomorrow.” Propeller was held on a Friday. Mistakes to be avoided were stated for everyone’s business benefit.

Another speaker discussed his study and revelations about those who make money and make it “big.” He said that the average- to low-income person is working on fixing six things at least, to make himself a better professional/worker. The next stage up is working on three things. The high-income earners do the two things they are good at and don’t bother working on their “faults” at all. His message: “Do what you are good at!” He eschewed the schools and prevalent philosophy of trying to improve people in all areas. Stick to what you are good at! Old school, and yet so true: “Do what you do well.”

There were angel funders present. A veteran business owner, Scott, questioned angel funding: “Why give money to a kid without real world experience? They have no idea how to manage a business.” I believe that passion and drive, as well as the willingness to listen to a mentor, is the answer.

Here are some of the businesses I encountered:

Other companies followed the conventional business model of finding a void and filling it. Sphere Technology Solutions, for example, which is based in Jersey City, was founded by Rita Gurevich when Lehman Brothers closed down. She was in charge of data “janitoring,” as she calls it. She found this to be a necessary and yet unavailable service, which she and her medium-sized company now provide internationally.

There were many sports-related businesses, apps and technologies at the Propeller fest; and there were many small businesses and entrepreneurs who had an idea for an app. Several social media platforms for niche markets were to be found. Inventive, creative apps designed to fill a void were aplenty. COSIGN (New York, N.Y.), for example, allows people to tag items in pictures and receive monetary rewards for purchases. Many apps were new and not yet monetized, but GoBaby (New York, N.Y.) and JackRaffit (Brooklyn, N.Y.) were monetized.

GoBaby, cofounded by Natalie Kaminski, is an absolutely brilliant app that provides rentals for all sorts of necessities to travelers with babies. This fills multiple voids. Traveling mothers do not need to lug along all sorts of stuff. Companies with extra stock and overages can profit from the rentals of nonmoving stock!

GoBaby is somewhat unique in that the woman with the idea for the app is also the app developer. More commonly, it seems to me, founders with ideas for apps seek out developers to program their services.

JackRaffit offers, through a subscription service, the ability to hand out tickets for raffles—without the paper. This helps those who are not present to receive the award. It cuts costs, time, paperwork and manpower for those running the raffle.

There were lots of tools for app developers, entrepreneurs and small businesses. Zoho (Pleasanton, Calif. and Austin, Texas) which is in competition with Salesforce, was hawking its wares. Sailthru (New York, N.Y.),which does B2B marketing with innovative analytics that covers email, web browsing and app usage, hawked its wares. Ciro project and task-management app software hawked its app.

Patent agent Elizabeth Gearhart, from Gearhart Law (Summit), was on hand. Accountants from EisnerAmper (Iselin), which specializes in small/medium-sized enterprises, startups and entrepreneurs, were offering their services.

Several speakers mentioned that startups have to be very careful about whom they hire. Startups cannot afford to waste money on bad talent. Coincidentally, ready to fill that recruiting need were the companies Mercer PeoplePro and Hired (San Francisco, Calif.), which cater to small/medium-sized enterprises and handle other personnel issues. Mercer is a large international HR concern with its innovation hub in Hoboken. Mercer found that PeoplePro  was best suited for small/medium-sized businesses that do not have the funds to have an HR department to handle the recruitment process. They also developed an app, known as Mercer Match that is presented as a series of games, that assesses applicants’ skills and profiles.

Digital Reality provides the closest cloud connectivity of any provider; it’s unique in that it owns its own data centers, boasting IBM as a customer. Also, they manage Internet gateways into the U.S.A. They have several data centers right here in New Jersey—in Weehawken, Clifton and Piscataway.

My personal advice to those vendors who did not do this: Make sure you have business cards. Have a sign. “A business without a sign, is a sign of no business.” Have flyers or pamphlets. Even though this is the digital age, these low-tech business tools are essential. You have to put something in the customers’ hands.

You cannot rely on customers taking pictures with their phones! What if their batteries run out? That was a concern, that their batteries were low, that I heard from more than one person. What if they are just not that motivated to take a picture. Give them a pamphlet.