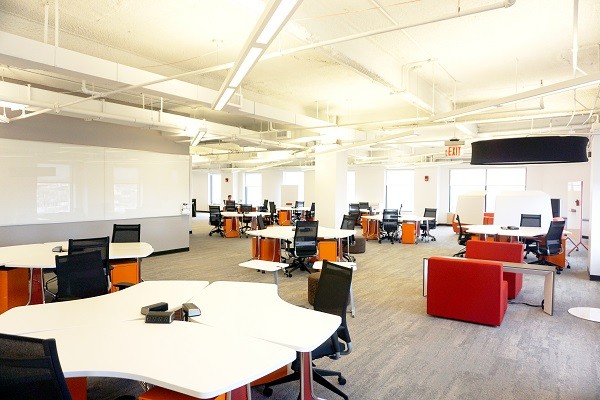 Applications are open at http://www.newarkventurepartners.com/labs/

The fund, which was announced with much fanfare last July, was founded by Audible CEO Don Katz, and by NVP limited partners Audible (an Amazon company), Dun & Bradstreet and Prudential Financial, as well as some unnamed individual investors.

The accelerator will be located in a new 25,000-square-foot coworking space in the same building as Audible’s headquarters, in Newark. The building is also occupied by Rutgers Business School, which contributed the space.

According to a release, managing partners Tom Wisniewski, formerly of RosePaul Ventures (New York, N.Y.) and Dan Borok, formerly of Millennium Technology Value Partners (New York, N.Y.), are looking for tech innovators from the New York area ecosystem and from “around the world” to fill its world-class space.

The office features a high-style workspace design; ultra-high bandwidth WiFi access; and 10 gigabit fiber-to-desktop, which  is much faster than a standard business-class connection.

Also this morning, NVP announced that it had raised $23 million on the way to a close of a $50 million fund. Monies from the fund will be used for  the NVP Labs participant companies as well as other investments.

NVP is now saying that the Labs will fund the accelerator participants with $80,000 per company in exchange for a five percent equity share, and will provide up to $1 million in follow-on investments to all graduating companies that complete a qualified financing. That qualifier is important.  Companies must show that they are able to attract outside investors before NVP will provide the follow-on financing.

For an accelerator, one of the advantages of being collocated with Audible is that the participants will have access to the firm’s corporate partners for hands-on support, as well as executives and advanced technologists who will provide mentorship. Participating companies will also have unparalleled access to Audible system engineers and architects, data scientists, technologists and business experts, and to engineering and business associates with graduate-level training from the greater Newark vicinity, NVP said in its release.

Wisniewski also announced that the fund has closed its first large investment. That was in StrongArm Technologies, which is a next-generation human performance equipment company. StrongArm makes so-called human exoskeletons, which are external structures that support the wearers in some fashion.

On its website, the company says: “Through innovative design, StrongArm’s flagship product, the V22 ErgoSkeleton, unlocks human potential with a stress on safety, strength and endurance through injury prevention. The founders, sons of fathers who worked strenuous blue collar jobs, are driven to help the tens of millions of people who use their bodies as instruments for productivity daily.”

At Propeller, the tech and innovation festival that took place in Hoboken on May 20, Wisniewski stated that a member of the StrongArm management team would be relocating to Newark from the Brooklyn Navy Yard and that the startup would be growing the company in Newark.

Referring to these developments, Don Katz said in a statement: “Newark Venture Partners, specifically designed to connect Newark to the east coast technology ecosystem and is key to recasting Newark as a pioneering innovation zone and ultra-bandwidth tech center. Its dual purpose has truly historic import: it is a sophisticated de-risking funnel with considerable financial upside, and is a principal catalyst connecting the urban core to the early-stage growth economy.”

Katz added: “As an extension of Audible’s commitment to Newark’s continued turnaround, our domain experts across business and technology look forward to being ‘on call’ for Newark Venture Partners founders and companies.”