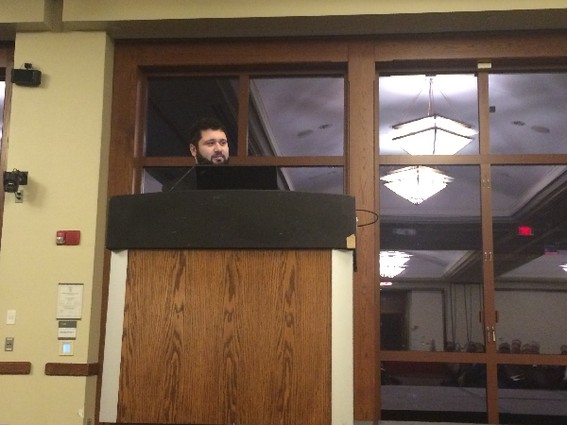 [At the Montclair Entrepreneurs meetup on March 4, speakers from three New Jersey technology startups gave students and members of the community accounts of their entrepreneurial journeys. For each one, this journey was unique. A past article focused on Philip Kennard, of tech startup Futurestay. A future article will cover Jason Vitug, of Phroogal.

This was the advice given to middle-school-aged Hani Shabsigh by his father, advice he didn’t appreciate until much later, when he started creating things himself. Today he is CTO of Inbox Messenger.

Shabsigh started what became Inbox Messenger at a New Jersey Startup Weekend. When his team won first place, they were invited to an interview with the TechLaunch accelerator (Clifton), and then joined that organization’s  second class.

Inbox Messenger recently closed a funding round of $3.9 million financed by an angel investor, which is allowing Shabsigh and his team to take Inbox Messenger to the next level. There may even be a rebranding in their future, he told the meetup audience.

Shabsigh faulted his local school system for requiring him to check boxes to get decent grades, but not urging him to visualize something that nobody had ever seen before.

It wasn’t until he was a college student in chemical and bimolecular engineering that the creative flame ignited. He was working in a lab making silicon carbide nanowires when his professor said she dreamed that they’d be used to cover windows because they propelled dust.

“Seeing the spark when she spoke was incredible,” he said. That incident and a college entrepreneurship class gave him the impetus to create something new. He and a classmate submitted an idea using alcohol as an alternative, sustainable fuel. While neither he nor his partner had the expertise to follow through on that project, Shabsigh learned about the importance of the pitch in that class. Later, he learned that there were some commercial products using similar ideas.

After graduation, Shabsigh became a consultant at Deloitte, and found that the perks were fun and that he got to work on some cool technologies while jetting off to different destinations.

“But something was really bothering me when I worked there,” he told the meetup audience. Group messaging apps had become the rage, and he watched as his favorite app, “Beluga,” was bought by Facebook and became part of Facebook Messenger.

“I remember sitting at my desk at Deloitte and thinking: I am missing out on all the fun! This looks like so much fun! These guys are making something awesome.”

Shabsigh — a self-taught programmer — quit his job, moved back into his parents’ home and created an app. He came up with a video-charades app that was sticky enough to convince one of his friends to lend him $10,000 to help him finish it and get it into the App Store. “We learned how NOT to market an app! We paid for downloads, advertisement and it all sucked. We had terrible users who left the next day.”

“Eventually the money ran out, and I was looking for something new,” Shabsigh said. With his new skills as a developer he went to Startup Weekend Madison, and with a team he formed there he built “Private Chat,” a messaging app with some cool privacy features such as “the ability to shake your phone and get a privacy screen over your messages.”

Seven days later the team was accepted into the second class of the TechLaunch accelerator. “We had a four-month summer program, we had created a business in ten days, and we really didn’t know each other,” he said.

Inbox Messenger used its $25,000 investment from TechLaunch to hire ten interns. “We had office space at TechLaunch, and the interns thought they were working at a real startup. We paid for their lunch, and paid for their transportation and had them focus on their job there,” Shabsigh said. “That ended up working really well,” he added, “because we had ten people with a lot of new ideas.”

These days, Inbox Messenger, now located in New York City, is praised for its design, Shabsigh noted. “Our lead designer started out as one of our interns,” he said.

Shabsigh added that some of the marketing through social media was pretty slow at first, but his business partner had discount tickets to TechCrunch Disrupt in California and he went, sleeping on someone’s couch.

“At the conference he ran into a TechCrunch writer who took some pictures of the app, jotted down some notes and disappeared.” He didn’t think much about it until the article came out.  “Twenty-four hours later people were tweeting us, congratulating us for the article.” Now Inbox was part of the action, and it was really exciting.

That TechCrunch article became very valuable when Inbox went to pitch investors, Shabsigh said. After it was published, the startup began tapping its networks for connections to angel investors.

Once the team had identified a potential investor who was really interested in them, they spent months building a relationship with him. “Our investor didn’t invest in our idea, he invested in us as founders…We learned that investors are people. If they don’t like you they won’t give you money.”

Shabsigh said that the negotiations were tough, but his company was always willing to walk away from a bad deal. “That’s how we were able to get enough money to hire the team that we wanted. The money gave us an 18-month runway. We are working on the next iteration of our product, and it will be different from what we have in the store.”

“We are excited to bring more context to our conversations in our 2.0 release,” he added. “What we’ve learned in the past year will play a big part in driving our next product. That’s why it’s important that the investor who invested in us, invested in us as people he thought could make the right product decisions.”

In a response to a question at the end of his talk, Shabsigh said he realized that the name they chose for the company and product was confusing, but he noted that this was before Google introduced a product with a similar name. “With our 2.0 we are considering doing a rebranding to avoid the confusion,” he said.

At the end of his presentation, Shabsigh came back to the topic of creativity. “I feel very fortunate that my creation has given me the opportunity to hire 12 other creators. I hope you all find your inner creators and you share that with others who come along.”

Previous: At NJ Tech Meetup, Zimmer and Farvardin Talk Building Tech Community in Hoboken
Next: Uber: State lawmakers and taxi industry are trying to drive us out of NJ