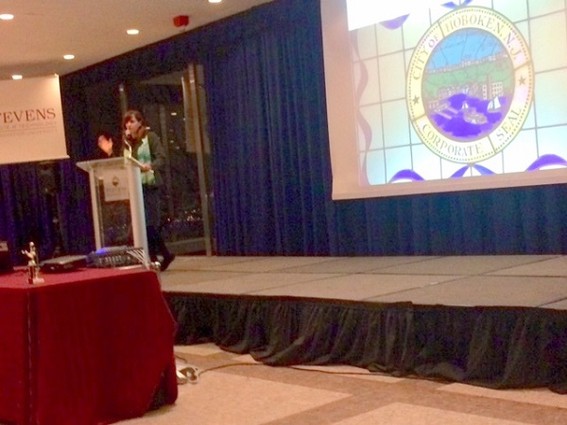 Hoboken Mayor Dawn Zimmer and Stevens Institute of Technology President Nariman Farvardin addressed the NJ Tech Meetup group on March 10, both expressing pleasure that Jet.com had decided to locate its headquarters in the “Mile Square City.”

Jet’s founder, Marc Lore, was the primary speaker at the event, where he was interviewed by NJ Tech Meetup organizer Aaron Price in a “fireside chat” arrangement.

Zimmer told the audience that her city “is extremely excited that Marc Lore has chosen Hoboken for his location, and I look forward to working with him and all of you to show everyone just how cool Hoboken is!”

Lore signed a lease with SJP Properties in December for a 40,000-square-foot commercial space at Waterfront Corporate Center III, the third and final building in SJP’s high-performance, mixed-use business complex in Hoboken.

As more evidence of Hoboken’s burgeoning tech scene, Zimmer pointed out that Mission 50 Workspaces, which has just received a grant from the New Jersey Economic Development Authority, will be tripling in size with the opening of another location, this one near the PATH train. “I think that is really fantastic,” Zimmer said.

She added that, along with Farvardin, her administration is committed to making Hoboken a place where startups can come and technology can expand and grow.

Hoboken is working on a development plan that is focused on creating space for startups, but also for industrial manufacturing, an economic sector that is moving back into urban areas, she said.

“And we are looking at Washington Street, designing it as a complete street and laying down dark fiber to spur innovation,” she added.

Zimmer also spoke briefly about a partnership with Stevens, as Hoboken tries to become a model city for shared spectrum technology. “We are going to be doing everything we can,” she said, including making a “trek down to Washington, D.C.”

Finally, she indicated that Hoboken would probably soon be hiring a chief technology officer. “This is not official yet,” she told the group, but the City of Hoboken sees this as a necessary step, “in order to work better with the tech community, and also to be as open and efficient as possible.”

For his part, Farvardin explained that Stevens is a strong believer in entrepreneurship. “We have a host of programs to instill entrepreneurial habits and spirit in our community,” he told the meetup group, including a program that requires all first-year engineering students to take an entrepreneurship course.

“We believe we have an unusual set of positive circumstances in Hoboken” that will make it the perfect place for tech startup companies, Farvardin continued. “We have the kind of workforce, a lot of well-educated people who like to live in Hoboken … we have an organization in the office of the mayor that is extremely supportive, we have the NJ Tech Meetup that holds its meetings here, and we have a first-rank technology university.”

According to Farvardin, Stevens is passionate about Hoboken as a tech hub, and is working hard to promote that goal.

“I’m especially pleased that Jet.com has chosen to set up shop here,” he said. Farvardin told the group that he had met Lore and was impressed by his vision. He also offered to explore opportunities for Stevens to partner with Jet and “help you in any form that we could.”

Both the mayor and Farvardin asked the audience to applaud Price’s role in building such a large and active tech community in the city.