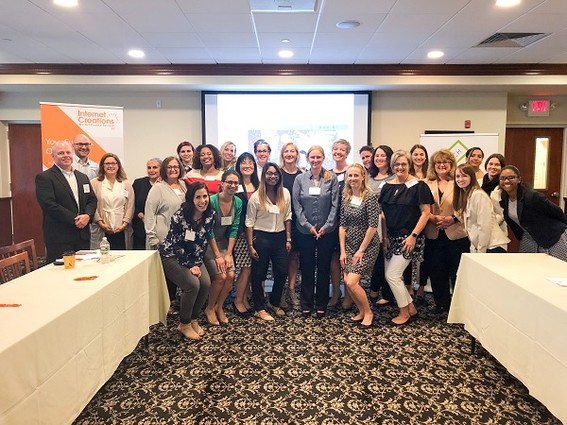 Internet Creations hosted the New Jersey Tech Council’s first Women in Tech Peer Networking Forum on Wednesday, May 16, in Hamilton. The event welcomed over three dozen attendees, while a variety of slides rotated in the background with statistics, for instance: “74 percent of young girls express interest in STEM fields and computer science. Yet only 18 percent of undergraduate computer science degrees and 26% of computing jobs are held by women” ? Girls Who Code.”

After 30 minutes of introductions and networking, the group took their seats to listen to the “Work Smart to Drive Success” panel discussion, moderated by Internet Creation’s COO, Felisa Palagi.

Palagi set the tone for the discussion by addressing that diversity in tech is a challenge. She said she envisions New Jersey a leader in promoting diversity to drive technology. But she added that “it’s up to us. If we don’t, the impact to New Jersey is widespread. Innovation and growth will happen elsewhere, and others will decide our future. Customers, businesses and talent won’t come to New Jersey, and our best and brightest will leave. In other words, we lose. We must act now.”

Here are some of the biggest takeaways from the discussion:

On Women in Tech:

On What Women Can Do to Self-Promote:

On Inviting Men into the Conversation:

The New Jersey Tech Council will be hosting a conference titled “Women in Technology” at NJIT on October 11. Learn more and register here.  There is also a NJ Women in TechFacebook group here.