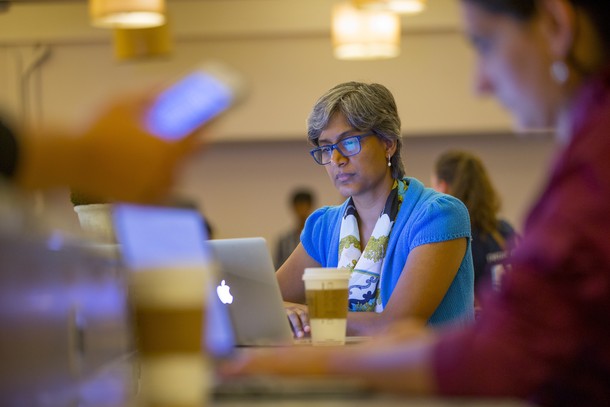 There are so many AI projects underway at the 55-acre campus in Hoboken that it would take a genius a week to track them all down.

Come October, that won’t be necessary, as the university will be raising the curtain on the Stevens Institute for Artificial Intelligence, giving 40 faculty members an opportunity to collaborate on research projects.

Stevens officials hope that the institute will give the university more visibility and improve the coordination of research projects on campus with those of their sponsors, including the National Science Foundation, National Institutes of Health and the U.S. Department of Defense.

“Artificial intelligence is impacting a very wide variety of areas that one doesn’t always necessarily associate with technology,” said K.P. “Suba” Subbalakshmi, director of the new institute and professor in the Department of Electrical and Computer Engineering.

“This gives us a forum to discuss ideas and look for and try to solve problems that are interdisciplinary in nature that often have a much wider impact, instead of us doing our own thing,” she said.

There are nearly two dozen AI projects underway, and several more about to start, at the private research university. And the work is being done in existing labs and centers, according to the university.

The institute will build upon existing AI and machine-learning research, involving the 40 faculty members, who specialize in healthcare and biomedical applications, cybersecurity, social impact, financial technology, art and music, foundations of AI and machine learning, cognitive networking and computing, robotics, perception and human machine interaction or energy and the environment.

Will the institute attract new students? “Definitely. People are so interested in AI. It’s what attracted me here,” said Stevens doctoral student Zongru (Doris) Shao, who wants to use AI to solve problems in financial security, healthcare and education.

Shao has been busy working with Subbalakshmi and Rajarathnam Chandramouli, a professor in the same department, on building new AI tools to spot fake or synthesized voices as a means of preventing unlawful access to private data and financial accounts.

Subbalakshmi and Chandramouli have also used AI to produce software tools that can detect deception in written text, and scan volumes of corporate emails and phone traffic for indicators of insider trading and financial fraud. These tools can also analyze social media posts, emails and voice calls for early warning signs of Alzheimer’s disease.

The future for the institute is bright, said Subbalakshmi.

“In day-to-day life, you tend to be so busy and caught up with your own life, you tend not to talk to other people, who could have interesting problems and insights. Getting out of that zone that we normally tend to be in is something that will be facilitated by this institute.”