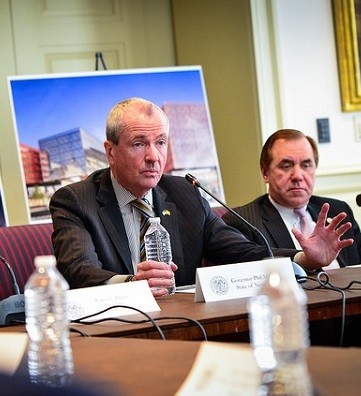 It’s called “The Hub” — a redevelopment project in New Brunswick that Gov. Phil Murphy says will help realize his goal of making New Jersey a magnet for scientific and technological innovation.

Plus, he said, it will bring “lots” of new jobs to the state.

Murphy and a bevy of state, local, education, and business officials gathered Monday at Rutgers University to tout the long-planned 12-acre complex, which will mix residences, retail, research facilities, and space for science and tech companies.

Plans for the project go back five years — well before Murphy was governor — and Murphy stressed that Monday was not a “ribbon-cutting ceremony.”

But the governor, a Democrat who took office in January, said there is now a “will” to get the project moving along.

Rutgers President Robert Barchi called Murphy the “catalyst” for the project being kicked into gear.

The governor’s office referred to the project as a partnership between the state, private corporations, and Rutgers, New Jersey’s largest university.