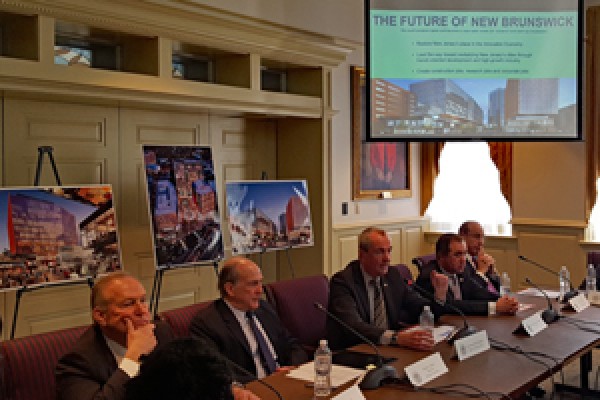 Gov. Phil Murphy has sketched out a vision for a New Jersey economic rebirth that’s centered around innovation and technology, and yesterday the governor highlighted how a four-acre site near the main train station in New Brunswick could eventually play a key role in that effort.

Saying he wants to see an “innovation hub” take root in New Brunswick that could foster the development of startup companies tied to cutting-edge research, Murphy convened a meeting with local leaders, officials from Rutgers University, and nearby businesses, to set an agenda for his goal of redeveloping the site as part of his broader economic-development dream.

“This is a very significant opportunity,” Murphy said during the meeting held on the Rutgers University campus. “We’re not playing at the edges here.”

The site that Murphy has his eyes on in New Brunswick is owned by the city, and it has been targeted for redevelopment for several years. The governor and other officials said the proposed innovation hub is in the earliest stages of planning, with some environmental remediation still required. Also left unclear is how exactly the hub would be funded, and what, if any, financial role the state could play in the funding.

Representatives from the city’s redevelopment agency and the state Economic Development Authority said as yesterday’s meeting came to a close that they would be working together to move ahead on the governor’s vision for the location, with a likelihood that many other partners would become involved. Murphy’s plans for the site also won an immediate endorsement from New Brunswick’s mayor, Rutgers’ leaders, and a key state lawmaker, Assembly Speaker Craig Coughlin (D-Middlesex).

During his successful run for governor last year, Murphy stressed the need to improve a state economy that has generally been lagging the national pace of growth and that of many surrounding states since the end of the Great Recession. Murphy also frequently pointed to a report issued last year by the global-consulting firm McKinsey & Co. that highlighted the successes of some other states in fostering the growth of startup companies by using small-business incubators and accelerators.

Previous: It's called 'The Hub' and Murphy swears it will help make us a tech magnet
Next: Rutgers Virtual Reality Showcase Speakers Discuss Impact of VR on Cognition and Medicine

755 More posts in Around New Jersey category
Recommended for you