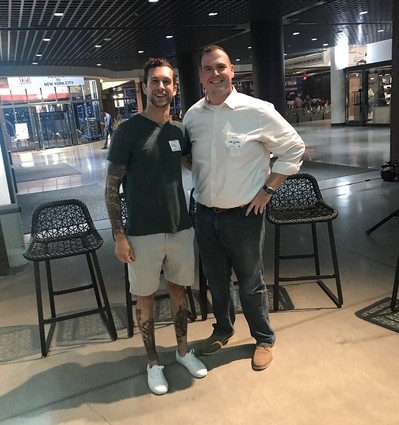 Dan Sullivan had an idea brewing in his head. The events and outreach coordinator for the New Jersey Tech Council wanted to help develop the burgeoning innovation hub in Jersey City.

He wanted to bring together the city’s diverse technology and investment communities, local government, entrepreneurs and experts to talk about the most timely technology trends and insights of the day.

He linked up with Meetup, a popular platform for finding and meeting like-minded groups of people. And he reached out to his contacts and those experts.

After running the group for almost two years, Sullivan, 26, is passing the baton to another member. He is moving to South Jersey, where he has just purchased a home. But he said that his move “will shift the energy” of the group, with new leadership and new ideas.

“We put these programs on to bring in vibrant minds and thought leaders to talk about whatever the topic should be,” Sullivan said.

One of the meetup speakers, Bryant Nielson, founder and executive director of The Blockchain Academy (Englewood Cliffs), applauded Sullivan’s work.

“He took his professional role at the New Jersey Tech Council and translated that into an approachable meetup group in Jersey City,” he said.

Thad Eidman, COO of Acreto (Jersey City), added, “As a startup located in Jersey City, we feel like Dan has been really instrumental in connecting us to a number of new people in the New Jersey tech community, and we feel he has done great work in bringing that community along into a cohesive group.” Acreto is a cloud-platform startup that secures crypto-based internet-of-things ecosystems.

The meetup group has 1,508 members, with more than 1,762 people attending the 22 gatherings that Sullivan hosted. The discussions focused on such topics as female sextech entrepreneurs, the future of cannabis in Jersey City, networking and pitching to investors, the impact of artificial intelligence and machine learning on marketing and the basic concepts of Bitcoin and Ethereum, to name a few.

On August 2, he hosted his last meeting, discussing blockchain and the future of a blockchain-enabled economy, before handing the mic to the group’s new organizer, Ben Yurcisin, 27, of Jersey City.

Yurcisin is the founder and chief executive officer of FunFinders(Jersey City), a one-stop shop for all interesting and entertaining activities in New York City and New Jersey. FunFinders aims to go global.

He is also a project manager for an IT consulting firm. Yurcisin has been a member of Jersey City Tech Meetup since April 2017, and has co-hosted some events.

He noted that, in New York, “if you want to get involved in something entrepreneurial or startup or tech, it’s more intimidating. With Jersey City, there is more of a sense of community. Everybody comes together, and it feels like a family. It is easier to meet the right people.”

Previous: Catching Up with Heyward Donigan, President and CEO of Vitals
Next: These are the 16 Best Tech Places to Work in NJ According to NJBIZ