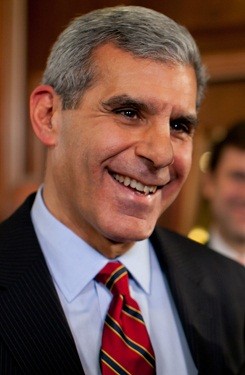 Well before Hurricane Sandy was even a thought in N.J., NJTechWeekly.com devised some questions for the two candidates running for Senate. Thanks to Alan Skontra and his hard work following up with the campaigns we now have answers. We are posting the material sent by each campaign as it was sent to us, unedited, so you can judge for yourselves. These answers came from Republican Joe Kyrillos. ES

1. What role should the government play in supporting the IT industry in New Jersey?

The government’s role in the IT industry should be the same as its role in any other industry– create the climate for businesses to grow and succeed.   Unfortunately, the current role of government has expanded to picking winners and losers in the game through complex tax policy and a wide scope of unnecessary regulatory impediments.

To make businesses more competitive, we need to lower our corporate tax rate—which is now the highest in the world at 35%– and make regulations more affordable to adhere to.   I have a jobs plan that accomplishes just that.  My plan puts regulators on a budget using regulatory cost caps, and cuts the corporate tax rate by 10%.

I also want to encourage a private sector stimulus.  Currently there is $1.8 trillion in corporate profits locked out of our country.  Companies won’t bring that money back because it will get taxed twice.  By reforming the tax code, companies can bring those profits back to our shores and invest in America rather than Europe or China.

2. As a current elected official, how have you used your position to fill that role?

I have had a role in nearly every business and economic incentive program in New Jersey over the last 20 years.  I helped establish the Business Employment Incentive Program which is the state’s centerpiece incentive to stimulate job creation.   My opponent has consistently voted in favor of higher taxes throughout his career, I have worked to lower taxes for individuals and businesses, and have saved New Jerseyans from nearly $12 billion in new taxes.

Throughout my time in the State Senate, I have worked with Governor Christie to pass balanced budgets, institute teacher tenure reform, and make our pension systems viable for the future.  We have faced our toughest challenges head on, in a bipartisan way, with a Republican Governor and a Democrat- Controlled legislature.  We have worked together to produce for the people of New Jersey—and now it’s time to do the same in Washington.  We have the opportunity to change course, and allow for more economic opportunity, not create more roadblocks to success.

3. If elected, what measures will you take to support the IT industry in New Jersey?

Having a robust economy will lift every individual, business, and industry in New Jersey.  I have put forth a jobs plan that will help us get there. And it is important to note, that New Jersey is not an island.  The problems we are facing here at home are not unique to our state, nor are they ones that a strong national economy wouldn’t fix.

Specific to the IT industry, I would propose making the research and development tax credit permanent, and allow for more innovation at the state level.  My jobs plan would accomplish this by designating a pro-rata share of job training dollars to be block granted for states that apply for them with a proven record of investing in new technologies.  And with the research and development tax credit permanent, American businesses will be encouraged to invest in job-creating innovation and scientific discovery.

4. What will you do to help IT employers hire more workers, and for the workforce to have the skills necessary to fill those jobs?

IT employers will expand and hire more workers when they have confidence in the state of our economy.  Due the failed economic policies of my opponent and others in Washington, business leaders have stalled their growth projections, and made decisions based on bracing for difficult times.  With a robust economy and the certainty that their taxes will not go up, employers will move forward with expanding their business, hiring more workers, and investing in their employee’s continued education.  Those are the kinds of things that will not only help create a more skilled workforce, but will also build a stronger economy through higher paying jobs.

5. Where do you see New Jersey’s IT industry in five years and beyond?

I want our country to restore its standing as the home of innovation.  And if that innovation can come from the IT industry in New Jersey, that’s even better. My jobs plan calls for increasing the amount of high-tech worker visas so more skilled and educated people can come to work and invest in the American economy.  And as I mentioned before, if we make the research and development tax credit permanent as my jobs plan stipulates, companies will be able to allocate more time and resources to innovation and new discoveries.   More funds will also be allocated to research and development if we lower tax rates, thus reducing the burden of tax expenditures on businesses.

My vision for the future of our country is more jobs, lower taxes, higher incomes, and a renewed sense of economic prosperity.  Under my opponent’s leadership, we have seen the exact opposite with higher taxes, more spending, more debt, and declining incomes for middle class families.  We can’t afford six more years of my opponent’s failed economic policy, and that’s why New Jerseyans will choose me on November 6th.