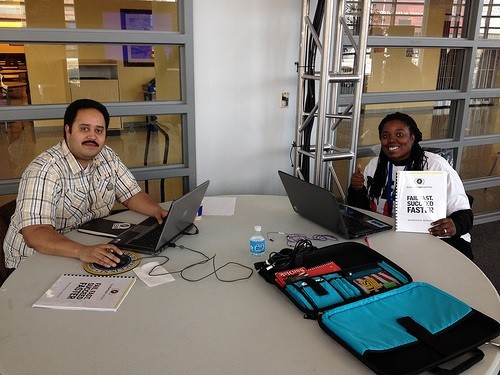 The It Takes a Village (ITV) team hard at work at Lean Newark. | Emily Manz

In a twist, the winners of Lean Startup Machine Newark, which took place the weekend of March 1, 2013, didn’t turn out to be purely tech companies, although Lean methodology is primarily associated with those kinds of businesses.

Taking first place was SnackBuilder, whose founder, Mark Annett, had first envisioned using cookies and other snacks as the food with which kids could build edible race cars. Annett’s company will have a strong e-commerce component, but much of his work at Lean Newark involved validating the market for his product.

Said Annett, “I came in with an initial idea that if I could take cookies and put it in a kit and make it fun, that was all I needed to do. I couldn’t have been more wrong about that!”

According to Rich Carpenter, a member of Annett’s team, the riskiest assumption the group had made was that kids drive a household’s snack food choices. “We thought all parents and all kids were our customer, and the problem we were solving was boredom,” he noted.

The team interviewed parents and were set straight. “We ended up invalidating our premise. Parents said, ‘No, I’m in charge of the snacks,’ ” said Carpenter.  Annett’s group learned that health is a big issue for parents. The team also changed its target demographic, aiming the kits at children between ages 5 and 10.

After that, the group tested its next riskiest hypothesis: that kids would eat healthy food if the experience were fun. Annett said they tried out the product at a party run by venue owner and fellow Lean Startup participant Iyea Brandy. There they found out that the kids actually wanted to play with the food and build it out.

Annett’s group learned more, however. They discovered that the parents wanted both healthy and “time-engaging” snacks —  that is, snack activities that would take up time at play dates and parties. “That pivot let us get to the next step,” said Anthony Johnson, another team member.

When the SnackBuilder group surveyed parents via Facebook using that idea, it received 16 email sign-ups on its landing page. The team generated cold hard cash (a clear criterion for lean startup success) by selling kits to parents. It also inked a deal with Brandy’s Build ’n Blocks enrichment center in Livingston.

Best of all, “we also got a signed letter of intent from a potential angel investor,” reported Annett.

Second place went to Newark community activist Nicole Singletary, whose ambitious It Takes a Village (ITV) project aims to reduce recidivism among former incarcerated nonviolent offenders by both providing them the skills they need to get into the workforce and lining up employers eager for their help. Singletary was sponsored at the event by Brick City Development Corp.

She said her initial customer hypothesis was “thinking that I needed to address small businesses. The problem is that ex-offenders have a lack of employment opportunities.” When surveying small-business owners, Singletary found that out of nine, eight were willing to hire and train ex-offenders. They had criteria, however: the former offenders had to be accountable and committed to the program.

When she returned to the Lean Newark venue to brainstorm, Singletary decided the customer would have to be a different one: government institutions in Newark and Essex County. She created a survey asking personnel at those institutions whether they would be willing to participate in this kind of program, should one be in operation. The result: of 39 clicks on the online survey, nine respondents signed on to be educational volunteers to help train the ex-offenders.

Organizers “Steve [Royster] and Raphael [Balbi] kicked us out of the building(to do our customer focused research),” said Singletary, so she surveyed 14 ex-offenders to see if her assumptions about their problems securing jobs were correct. She asked what had prevented them from seeking employment and what would have helped them find jobs in their particular situations.

While surveying the former offenders, Singletary learned that if there were some kind of stipend attached to the education piece, they would sign up immediately and commit to seeing a program through. “I’ve identified that there is a huge market for an academic skill-training program to help ex-offenders as a solution to the rising recidivism in Newark,” she concluded. Singletary worked on her project with Leo Zuniga.