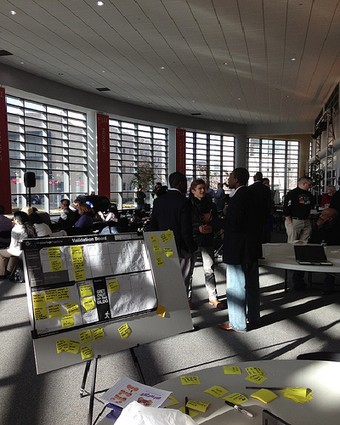 NJTechWeekly.com spent time on Sunday, March 3, 2013, with some founders who had brought their ideas to Lean Startup Machine Newark. We covered the events of Friday night, March 1, in Part 1 and the competition’s winners in Part 2. In this installment we describe the valuable lessons the founders say they learned from participating.

John and Margaret Incantalupo arrived at Lean Newark with a pitch for CollegeRise, their idea that high school students and their parents need help navigating the college admissions experience, which Incantalupo told us “we believed at the start was a complex process fraught with a lot of hurdles, both financially and in finding information.”

While the team didn’t end the weekend with a complete product, it gained a lot of knowledge, John Incantalupo said: “This weekend was about learning to work with a team and what a team dynamic can do when you are learning the entrepreneurial pursuit. Mentors here helped us through the process.” Group members include Marc Evans and Larry Sullivan.

Incantalupo explained, “We started out thinking the moms of high school students would be our market, and we also thought we would go after a demographic of first-generation college attendees. We went to the Newport Centre Mall (Jersey City) and did some customer development interviews. They didn’t go as planned. We invalidated that particular demographic.”

The team then interviewed the students but found they were the wrong demographic as well. “We wound up at a log jam,” Incantalupo stated. After speaking with mentors Steven Royster of the New Jersey Economic Development Authority (EDA) and Mukesh Patel of JuiceTank (Somerset), Incantalupo’s team learned that it would be OK to start a for-profit business catering to parents in affluent school districts.

So the team went to the Short Hills Mall. Said Incantalupo,“We interviewed some parents. We got some validation, but not enough to go forward.” The next morning Incantalupo was feeling low, but the rest of the team came through with an idea on how to validate their assumptions.

He explained, “We used Amazon Mechanical Turk and Google Voice technology together” as a mechanism for reaching out to high school parents. Ten out of the 11 who responded validated the team’s riskiest assumption: that high schools are not doing a great job of helping students through the college admissions process.

“We are happy that our team was encouraging and working hard till the very last minute this weekend,” said Incantalupo.

[In an update, Incantalupo told NJTechWeekly.com that the team had found a way to incorporate its initial assumption — that first-generation and lower-income students would be good targets — into this business. “Our company is now planning on offering free [presentations at] high school assemblies in urban areas in the near future,” he said.]

Xenia Murray and Wanda Reynolds worked on A Dame’s Game, an Internet site that “talks about sports to women the way women talk about sports with each other,” explained Murray. Their riskiest assumption: that women want female-focused sports information. As part of their research, the pair approached women on the street and asked them about this. Said Murray, “A lot of women were quick to say, ‘No, I don’t like sports,’ but they added, ‘I’ll watch the Yankees.’ Or they had some other exception.”

“We were in the position of having a solution to a problem that the customer didn’t know they have,” said Murray.

The team’s first pivot changed the assumption to: women have an emotional connection to sports. The two then conducted an Internet survey asking women whom their favorite athlete is and why, providing three answers from which to choose. If half the respondents mentioned anything other than the athlete’s skill set, the pair believed this would confirm that women are attracted to more than just the sport itself. Although there were a limited number of respondents, all discussed the sports figure’s personality, Murray and Reynolds said.

Raw End’s hypothesis: there is demand from socially conscious consumers for products that don’t enter landfills, but there is no way to solve this issue on a larger scale. In addition, said founder Andrew Saada, “We thought that people would pay more for eco-friendly goods. We thought the demographic would be young professionals.”

According to Saada, “We achieved some market validation for this project. We found a new market in high school and middle school students, who were really excited about the prospect. We found a retail segment and had some positive responses from employees in high-end retail markets.” The conclusion: people want to reduce landfill waste. The team has created a landing page and had some demand for the product, and Saada said his next challenge is how to scale the business.

For Iyea Brandy, the Lean Newark weekend was about finding out whether Pint Sized Playdates, an online play date-booking site, was a viable tool that parents would use. Mariam Selevany, an NJIT student who participated in Lean Newark as part of Dr. Randal Pinkett’s Campus CEO challenge, assisted, working alongside the workshop’s mentors. Said Brandy, “Every mentor worked with me. … I’ve been an entrepreneur since high school, but this was the first time I ever went through a process like this!”

Brandy started out with the assumption that parents of kids ages 6 weeks to 10 years were having trouble finding other parents that share their values. Her riskiest assumption: that the other families cared about their potential play dates not being conveniently accessible. After surveying parents at the Newark Museum, Brandy realized that convenience wasn’t really the issue.

A pivot to the assumption that parents were looking for a safe place for their kids to interact didn’t work out, either. So Brandy headed to her enrichment center in Livingston, where there was a function in progress that Sunday morning, to survey parents in attendance. The parents didn’t know who she was, so there was no bias.

Said Brandy, “Every parent said they would not book play dates online. …They didn’t want security issues with people knowing where their children would be. I came back and thought I either didn’t have a product or I wasn’t talking with the right people.”

After discussing the problem with several mentors, Brandy changed her target customer to “tech-savvy parents who wanted to interact with other parents and would go online.” She used Facebook to ask parents about her idea. Twelve replied, and 10 out of the 12 said they would book play dates online. “Some even said they would prepay for the service if it was safe,” she reported.