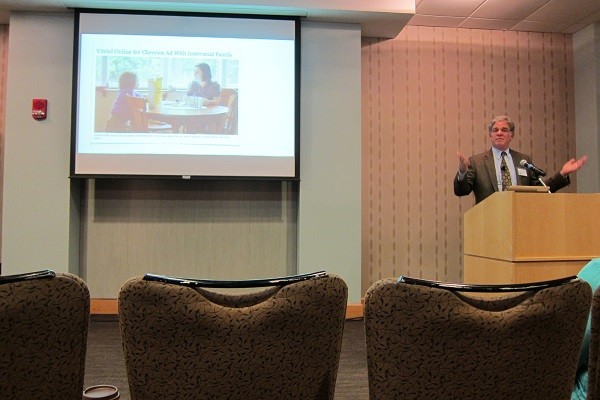 During a discussion about the future of the job market, on Nov. 12 at Rutgers University, two experts gave audience members insights into America’s coming economic and demographic changes.

The event was organized by a private, nonprofit economic-development group, Einstein’s Alley, and held at the university’s Heldrich Center for Workforce Development, in New Brunswick.

Planned as the first in a series, the discussion was titled, “The Future of Work – Part 1: How does Innovation Affect Work in the Future? Looking through the Lens of Technology, Economics and Society.”

The featured speakers, who also welcomed audience questions, were Paul Taylor, a senior fellow at the Pew Research Center and a former newspaper reporter, and Carl Van Horn, the founding director of the Heldrich Center.

Katherine Kish, executive director of Einstein’s Alley, opened the discussion by outlining some of the economic changes already taking place.

She told the audience that, for the first time in US history, “we now have four generations in the work force,” and she added that each of these generations is “presenting interesting concerns and opportunities.”

Nevertheless, such concerns and opportunities are usually not at the forefront of people’s minds, said Taylor. This is partly due to the fact that, given the slow pace of economic and demographic changes, they are rarely considered newsworthy.

“I had an old editor at the Philadelphia Inquirer who described these stories as stories that ‘ooze rather than break,'” he said. “Nobody calls a press conference to announce” such changes, Taylor added, but they will have a large impact on the American workforce.

Technology is one of the major factors driving change in the job market. Although hesitant to make firm predictions, Taylor noted that technology primarily seemed to be replacing the mid-range white- and blue-collar jobs that are most easily performed by machines.

Conversely, certain “lower-end service jobs” will apparently continue to be occupied by humans, Taylor said. He added that there were also some high-level jobs for which humans would hopefully remain uniquely qualified.

But the jobs that remain will not provide enough employment opportunities to meet demand, according to Van Horn. As an example, he referred to the retail sector, where jobs are already being replaced by automation.

While the most obvious case may be Amazon’s putting brick-and-mortar bookstores out of business, “this is also going on in Lowe’s, and Home Depot, and Walmart,” Van Horn said.

Van Horn also pointed out the use of automation in restaurants like Olive Garden, which, he said, simply reheated food that had been made in a factory. “There are no chefs there anymore,” he added, “there are just people who manage the buttons.”

Although factory-made food is becoming more common, a revival of the manufacturing sector may not be a viable solution to the job shortage.

Demographic changes are also creating challenges for businesses. For example, millennials often prefer to rent rather than buy expensive items like cars, and they favor living in urban areas much more than previous generations did at the same age.

He illustrated this point by describing a recent presentation he had made at Volkswagen. Taylor said that the staff  there had taken note of the rise of companies like Zipcar and Uber, and wondered whether Volkswagen should adopt aspects of those businesses to meet the changing consumer demands.

As the millennials age, so does the large baby-boomer generation that raised them, leading to a higher population of older workers.

This means that more older people are remaining in jobs near the top of the career ladder, and Van Horn believes this is preventing younger workers from advancing. However, many older workers have also been forced to take lower-paying or part-time jobs since the 2008 economic crisis.

Van Horn proposed two solutions to America’s employment challenges. One was to encourage older workers to retire if they could afford to do so. “We have to give them that sense of involvement—the reality of involvement and engagement—without having a full-time paycheck,” Van Horn said.

The other solution was to have Americans enter the global labor market at much higher rates than they do now. He said that when young people ask him if they should learn a second language, he advises them to “learn a second language in a country that is expanding, because you’re probably going to have to live there if you want to have a successful life—at least part of your career.”

While many Americans may have to live abroad, Taylor suggested that immigration to the United States could actually improve the country’s economy. “Immigrants are strivers, immigrants believe in the future. They come with a lot of hope, and they tend to have—for all those reasons—a lot of kids. Part of their whole deal is ‘I want to build a better life, not just for me, but for my children,'” he said.

According to Taylor, only one in five Americans were immigrants or  the children of immigrants in 1960. However, today “we are on a path towards a record 37 percent,” he said.

The large crowd of attendees, most of whom were baby boomers or older, paid close attention throughout the discussion, and asked the speakers a number of questions afterwards. Several also contributed to the dialogue with their own opinions and experiences. Some spoke about the way they related to younger generations at home, at work and with technology; and one woman said she didn’t believe it was realistic to think that older workers could be convinced to retire.

Despite what seemed like a grim outlook to some, Taylor reminded audience that things were not all bad. He referred to a recent international Gallup survey to drive the point home. The survey asked respondents worldwide whether they would like to leave their home country, and if so, where they would like to move.

Almost a quarter of those interested in emigrating from their country said they would prefer to move to the United States. “The desired country of destination in 2014 is the good old US-of-A,” Taylor said. “And for all of our troubles … 24 percent say ‘that’s where I want to go.'”

Previous: Healthcare Apps and Platforms Shine at Tigerlabs Startup Showcase, Part Two
Next: Marc Lore's Startup Jet Offers Equity To a Few People Who Bring in the Most Referrals