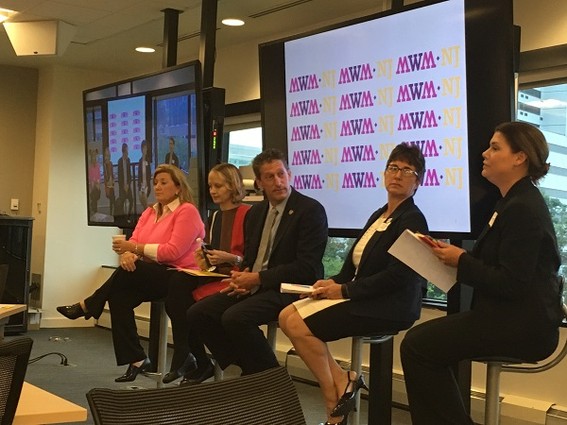 Panel discussed the state of women in STEM. | Esther Surden

It’s no secret that it’s hard to get high school girls to even take STEM subjects, especially those “harder” courses that are prerequisites for STEM programs at universities. Even women who take the prerequisites for college STEM majors don’t often choose to graduate with STEM degrees. Those that do, and land a STEM job, often drop out of the field.

At least one organization in New Jersey is working to reverse this trend. Million Women Mentors –New Jersey held a summit on Sept. 30, at Cisco in Iselin, to highlight how mentoring can help women.

“Our mission is to engage more girls in STEM fields and to retain them at the high school level, at the undergraduate level and advancing through their careers,” said Sally Nadler, co-state champion for Million Women Mentors, along with Kim Case, executive director of the Research & Development Council of New Jersey.

Case kicked off the summit, titled “Women in STEM.” She noted that “our state goal is for 3,000 mentors [both men and women] to sign up via the website by [the end of] 2016.” So far, 1,180 people have become engaged in mentoring women in STEM activities in New Jersey.

There were several talks during the day, but much of the basic information about the problem came out during a panel discussion called “The State of Women in STEM.”

Tanya Sivaeva, a partner at McKinsey & Company, a global consulting firm, talked about her company’s research into the topic of how to bring more women into McKinsey and help them stay.

“We have a big problem with women, and it’s one of our top three priorities. … We have about 40 percent of women coming in at junior stages, and then by the senior level we have about 11 percent. …We think that’s very embarrassing. We are committed to improving that, and we’ve been very open about that.”

McKinsey has been doing research about women in the workplace and workplace diversity since 2007, said Sivaeva. She then shared some numbers with the audience. In high school, about 50 percent of those interested in taking STEM courses are women, but then you see the “leaky pipeline problem” as the numbers shrink rapidly.

“We lose women at every stage,” she said. And when you talk about women who want to be founders of tech companies backed by venture capital, the numbers shrink to below three percent.

Terri Goss Kinzy, Rutgers University associate vice president for research administration in the Office of the Vice President for Research and Economic Development, noted that 46 percent of college graduates in New Jersey start in community colleges.  However, fewer than 12 percent of the degrees that come out of community colleges are going to women in engineering, computer science and other STEM subjects. “We are already seeing the problem at the community college level,” she said. “Women are going into the technical sciences at a much lower level.”

Looking at the nation as a whole, “the one thing that has been a big success is the biological and social sciences. We’ve reached a point where we have parity and beyond of women obtaining degrees in that area.” Kinzy added that there is a lot to be learned from that group.

The sad news, however, is that in the physical and mathematical sciences, “as you look not only at the undergraduate, but at the doctorate level, we are still lagging behind.” And while, over the last seven years, there has been an increase by almost 30 percent in the number of students earning engineering and computer science degrees, the number of those degrees granted to women has only gone up eight percent, she said.

“In fact, we are just getting back to where we were almost ten years ago.”

On the positive side, she noted that Rutgers is one of the top 20 universities in the country for the percentage of women who graduate with STEM degrees. “It’s almost 20 percent,” she said.

Rutgers is using the concept of living-learning communities to help women in STEM fields create a support system for themselves. One of those communities includes an internship experience as early as freshman year, which gets the women in front of someone who can mentor them very early on, Kinzy said. The university has also built communities in computer science and computer engineering.

Women in STEM fields not only need mentors, they also need role models, she pointed out. And, “at the professor level, there is still a lot of work to do. …We know there is a lot of bias in the recruitment process.” Rutgers is participating in an initiative of the National Science Foundation called “ADVANCE.” As part of this initiative, the University of Wisconsin developed an entire program that universities can use to rework their recruitment process so as to attract more women, she said.

The only male on the panel, Andrew Zwicker, head of science education at the Princeton Plasma Physics Laboratory and an assemblyman for New Jersey’s 16th District, noted that it is really expensive to live in this state. “We had this great recession about six years ago, and when you look at New York, Pennsylvania and Delaware, we’re not recovering as fast as those states.”

“In my opinion, there are two things that make New Jersey strong. The first is where we are located in terms of being between Philadelphia and New York in the corridor that is the Northeast.” The second is “this innovation economy that we have a rich history of leading,” he said.

“We have the highest density of scientists and engineers” in the world, Zwicker explained. And if we want that to continue, “we have to grow the STEM fields, making sure that there are opportunities for people regardless of their gender or background.” In short, New Jersey needs to fix the gender “leaky pipeline” to help its economy to grow, he said.

Monica C.  Smith, founder of Marketsmith, who was also on this panel, had a lot to say about retraining women who have temporarily dropped out of the STEM workplace. The knowledge needed for STEM jobs changes fast, she noted. And retraining is a must if women hope to succeed in getting back into the workplace. See our recently published article here.