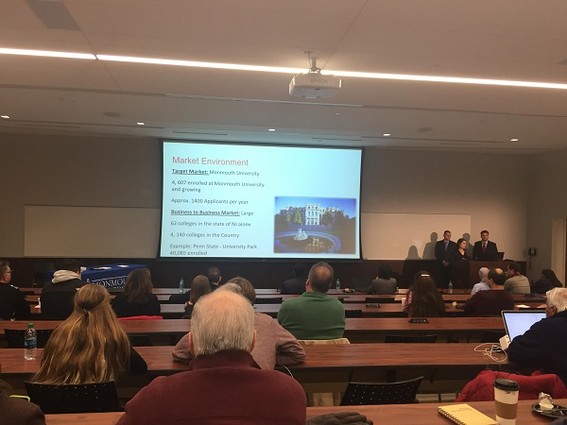 Everyone has that one friend who has all the answers, but imagine if that friend were available 24/7 and would text back no matter what.

Chatbots — or, more specifically, the knowledge-management software they use — could very well turn into that best friend when it comes to uncovering information. That’s what businesses are hoping for when they incorporate chatbots (also known as “virtual assistants”) into their customer service options.

Jeff Weinstein, president and CEO of RightAnswers, earned his MBA in business administration from Monmouth University. He led the panel of judges at the competition.

“When products come to market, there needs to be a marriage between business and tech,” Weinstein said in his opening remarks. He went on to note that technology and venture-capital initiatives in New Jersey start at the university level, especially with students who express genuine curiosity about solving common problems.

Three teams competed for a grand prize of $1,500, answering questions from the panel of judges and the audience. Each team had been given two weeks to develop and execute its ideas, with guidance and mentorship from Monmouth professors and RightAnswers professionals.

Binary Trio’s bot (named “Shadow,” after Monmouth University’s mascot) provided facts much faster than it would take to find the information online. Teamwork was a big factor in making this bot possible.

“It was great seeing so many different people come together to solve a common problem,” said Vazzana, an MBA student at Monmouth.

Licata, a senior computer science major, provided technical support for the team and helped program the bot. “It was really fun making this project a reality and making some friends in the process,” he said.

Shadow may indeed have a bright future ahead. Puccio, also an MBA student at Monmouth, said, “Our sights are on Scholarship Week and perfecting our pitch.” Student Scholarship Week is a weeklong conference at Monmouth that showcases student work inside and outside the classroom.

Bot City, the first team to present, tackled the issue of eating healthily. Its bot can customize menus for diabetics, vegans and people with food allergies.

Another team, C++ Get Degrees, developed a chatbot called “CampMe” with the intention of keeping campers safe by providing essential information for survival outdoors. Both teams used Slack API to build their bots.

One of the goals for each team was to have its bot show empathy and to humanize a user’s interaction as much as possible. Some bots could tell jokes and even sympathize with users, saying things like “I hate bugs, too.”

Peter Chmiel, product manager at RightAnswers, mentored the students throughout the process. “I helped some students with technical hurdles, as well as narrowing the effects of each bot,” said Chmiel.

Each team used a different configuration of coding and programs to create its end result. With so many options out there and such limited time, each team had some difficult decisions to make.

Building off the energy in the room, the inaugural event will most likely lead to more events down the road.

“We plan to promote the program to a wider audience at Monmouth and have more teams participate,” Chmiel explained. “I can see more events just like this take on the form of hackathons and be very successful.”