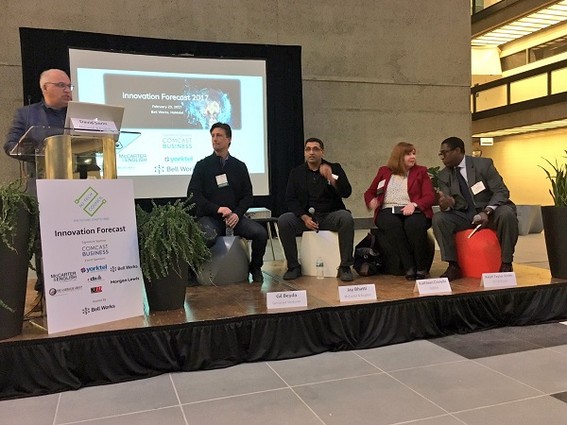 At this year’s New Jersey Tech Council Innovation Forecast event, on February 23, investors discussed the current fund-raising environment, and concluded that times were good for those seeking investment.

“There has been a lot of talk that the best of times are behind us,” Sorin said. “I’m not sure that I totally agree with that. I think it is a more disciplined period than it might have been in 2014 and 2015, but these are still some pretty good times to raise money.”

Nobody I See is Hurting for Cash Right Now: Coviello

If you follow the national news, you see that investments are down, said Coviello. However, “I have a micro view of what is going on in New Jersey, and I can tell you that the community in New Jersey is extremely active. We [EDA] committed to two new venture funds at the end of the year, the Tech Council Venture Fund and Newark Venture Partners, and that’s going to put more money to work in the state of New Jersey.”

The Angel Investor Tax Credit Program gives the EDA a window into who is getting funded, she noted. “We saw 57 unique companies in the state of New Jersey get funding from angel investors [in 2016] for $96 million … and those are just the ones we saw who came through our doors for this program.”

What’s interesting is that the average size of the investments from those angels was between $500,000 and $1 million. Also, companies will typically go to VCs for big rounds, but there was a company in Bridgewater that raised $55 million from an angel round. You didn’t hear about those kinds of numbers for angel rounds years ago, she said. “That’s a pretty big number.”

“What I generally see is that New Jersey lags the national trend. However, right now things are very frothy for the entrepreneurs I talk to in their ability to access capital. … Nobody I see is hurting for cash right now. There is a lot of capital out there.”

She added that entrepreneurs have to be smart about whom they’re taking the money from. But there is “more VC money, more angel money and significant tax credits and incentives through the State. … It’s really supporting our local economy … and not focusing on the national trends.”

Coviello added that New Jersey is also seeing a lot of capital coming in from overseas, particularly on the biotech side.

More Money Available Now Than There Has Ever Been: Beyda

“There is more money available now than there has ever been,” said Beyda. “Therefore, there are more companies getting funded at every stage than there have ever been.” This statement brought the audience to attention. Beyda’s company, Genecast, is a venture capital firm operating in the Northeast that invests in B2B technology startups at the seed stage.

“Last year, we saw 700 companies and met with close to 300 of those companies,” he said. Genecast funded two of them, which is typical. However, there are countless angel investors, seed stage funds, angel groups, strategic funds and also multimillion-dollar venture funds making early-stage bets, he said. “I’ve seen companies we’ve passed on getting funded. They just weren’t the right fit for us. … We see tons of companies getting funded. I don’t think there is a lack of capital for a really good company.”

No Shortage of Capital, but Follow-Up Financing Has Dried Up for Those Not “Crushing It”: Bhatti

Bhatti, who funds consumer brands, added that, for a really good company, there is no shortage of capital. “The one thing I’ve seen in the venture community is that companies that used to get funded” and don’t have a great business model are not getting funded anymore. This is particularly true of companies that have had a couple of funding rounds, and are not really “crushing it, just floating by,” he said. “The well has really dried up for companies” that haven’t shown the traction that investors had expected. “VCs are saying ‘let’s put our money in companies that are really interesting, really exciting and really demonstrating fast growth.’”

Bhatti tells companies that are having trouble getting follow-on funding to stop having meetings with VCs, and to instead spend the next few months fixing their business models, fixing the customer experience and doing what they need to do to put the company on a fast-growth trajectory. Then they can go out and raise money again.

National Shortfall Being Made Up by Cash-Rich Corporate Funds: Taylor-Smith

Taylor-Smith, who heads a strategic corporate fund, talked a little bit about investment cycles. “I spent the last three years with a corporate fund and two years before that in a financial VC fund, and prior to that five years as an investment banker. … Through that timeframe, I’ve seen several cycles. I would say that venture investing is certainly on an upswing. … I think it is true that there is money out there, but I think the sources of capital have changed somewhat. I think there is a lot of money from overseas, as Kathleen said, particularly from China and the Middle East.”

He added that, while the actual numbers of deals and total investments nationally from venture funds is going down, “I think that shortfall is being made up by corporate funds. … The stock market, which had gone through a down cycle, is now in an up cycle, and a lot of corporations are flush with cash.” One of the things they are doing with that cash is starting corporate venture arms, he said.