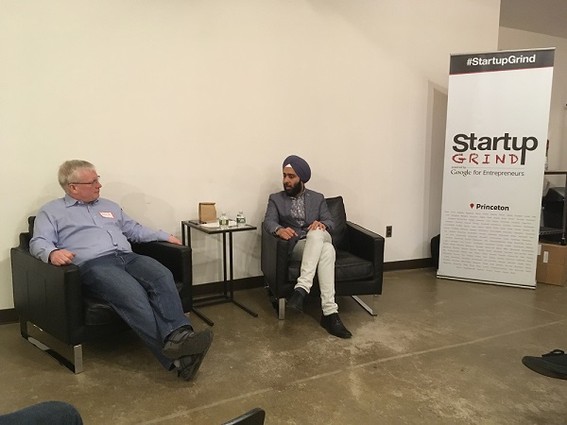 Marketing has made great strides in recent years, as companies have integrated the latest marketing technologies to help them achieve the best possible results in selling products and services in today’s digital economy.

That was the message from marketing expert and entrepreneur Jasmeet Sawhney, who was the featured speaker at the Startup Grind Princeton event on February 16 at the Tigerlabs coworking and entrepreneurship center, in Princeton.

Sawhney, managing principal and chief marketing officer of the digital-marketing firmYiblab(Berkeley Heights), told the audience that the marketing field has changed dramatically over the last decade, with the introduction of Facebook, Twitter, YouTube, Instagram, Snapchat and other mega-social media platforms, which are rapidly becoming — if they aren’t already — a marketer’s top choice for connecting with digitally oriented consumers.

The increasing popularity of content marketing and customer-relationship-management systems is also enabling organizations to quickly expand their reach into new markets, with often better results than with the older and more traditional methods like sales brochures and, in some cases, print advertising.

Sawhney expects that there will be continued strong growth in other next-generation marketing technologies, such as programmatic advertising. This high-tech form of advertising uses algorithms to buy and sell advertising space in real time, without human intervention.

Other emerging technological innovations, such as artificial intelligence and the internet of things, could be applied to marketing products in the not-so-distant future.

Sawhney offered the example of a printer running out of ink. The printer will automatically send a message to a supplier’s computer system, which will then ship new ink cartridges or email a coupon for replacement cartridges. Taking it a step further, the printer could transmit a message to several suppliers inviting them to bid on the pricing for replacement cartridges, and then give the sale to the company with a bid that matches the preselected price programmed into the printer.

Today’s marketers need to have a deep understanding of the various digital technologies and how they’re used to sell goods and services. They can no longer rely on the creative aspect of marketing alone, as their predecessors did a generation ago, to build brand loyalty among customers. “You need both creative and technical expertise,” Sawhney noted. “There is no market today that doesn’t use technology.”

It’s technology that Sawhney sees as a “big differentiator” between his firm and his competitors.  Sawhney, who has a background in both technology and marketing, believes that Yiblab’s ability to easily integrate both areas is a competitive advantage for his firm.

The use of technology in marketing campaigns does have its limitations, however. Sawhney explained that highly regulated industries, such as pharmaceuticals and financial services, have imposed certain restrictions on how much and what type of technology can be used in their marketing initiatives.

For example, according to Sawhney, it’s very difficult for pharmaceutical companies to effectively launch social media marketing campaigns because of the internal and external compliance requirements placed on the marketing of prescription medications. Prescription drug marketing requires extensive patient advisories, such as potential side effects, which poses significant challenges for digital marketers.

That means social media platforms like Twitter would not be good candidates for pharmaceutical marketing programs, given their formats and the typically long and cumbersome approval process. “We would have to get approval from three different departments—even for a one tweet,” Sawhney said.

Sawhney’s journey in building his digital marketing business has had its twists and turns over the years.

The Stevens Institute of Technology alum got his start 17 years ago, working as an intern and later as a full-time employee at the Bridgewater-based startup marketRX, a provider of marketing analytics solutions for the pharmaceutical and life-sciences sectors. During his tenure at the startup, Sawhney learned an important lesson from the founders: The key to success is to focus on providing customer solutions, not on “selling them some shiny new product.”

Sawhney enjoyed working in a small startup environment, where there was an entrepreneurial approach to business and he was allowed to work in different areas in the company. It was during his time working in marketing that Sawhney came to the conclusion that this would be his calling. “I figured out that’s what I wanted to do.”

But his days at marketRx came to end after the company was acquired by New Jersey-based tech giant Cognizant for approximately $135 million. It was then that Sawhney decided to put his marketing knowledge and technical expertise to work when he subsequently founded an e-Commerce company, Zarneq, which sold handmade goods sourced from Asia.

However, the e-commerce startup failed after one year because of supply chain issues. That experience and knowledge gained from running an ecommerce operation led Sawhney to start Retail Spokes, a Bridgewater-based content marketing platform and services company serving the retail industry. While building the startup, Sawhney noted the increasing demand for social media and content marketing solutions, which “has changed the game” in marketing over the past several years, he noted. This time around, Sawhney built a successful company, which was eventually sold to an India-based marketing agency, Communicate.

Retail Spokes laid the groundwork for his next company. Soon after, Sawhney founded YibLab—the abbreviation “yib” is defined as the highest unit of data—which has since seen explosive growth.

Last month, Yiblab was among 50 New Jersey companies that were recognized as having a fast-growth trajectory. The companies were selected based on their performance over a three-year period, with the firms collectively posting more than $2 billion in annual revenues and a total New Jersey workforce of over 14,000 people.

Reflecting back on his days as a young intern at marketRX, Sawhney continues to apply the lessons he learned there, which he considers to be just as valuable today as they were years ago. “It’s all about figuring out your exact capabilities and whether that would help the customer,” he said.

Previous: More Money Available for Funding Than Ever Before, Panelists Say at NJ Tech Council Event
Next: At the Jersey City Tech Meetup, Owners of MAINGEAR and InCharged Talk Hardware