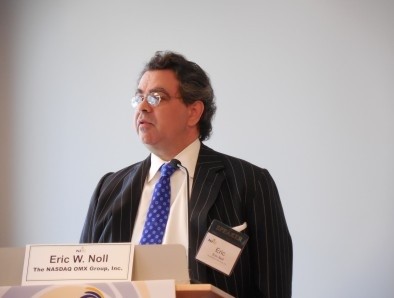 NASDAQ OMX is at its heart a financial technology firm, said Eric Noll, executive vice president of transaction services in the U.S. and the U.K. for the NASDAQ OMX Group. Noll was speaking to some 130 financial tech professionals at the New Jersey Technology Council (NJTC) FinTech conference, held at Opera Solutions (Jersey City) on June 5, 2013.

Many people know NASDAQ as a listing exchange primarily for technology companies. That is a still a big part of its business, but “at our core we are a technology company,” Noll told the group in his keynote address.

While NASDAQ’s headquarters are in New York, the company operates three data centers in New Jersey. The primary one is in Carteret, and the two others are in Mahwah and Secaucus.

Noll discussed how the markets have been revolutionized by regulations and technology in the past several years. It used to be that all the separate stock exchanges throughout the U.S. operated in a silo, he said, and were able to trade only the securities listed on them.

A “regulatory fiat” called the National Market System has allowed all the exchanges to trade everyone else’s securities, Noll said. All the exchanges were linked through an electronic system, and no trade could take place outside the national system.

So-called market makers disappeared, Noll said, and were replaced by electronic algorithm-driven firms, including high-frequency traders. “The world quickly moved away from what was a structured, relatively contained environment to a multipronged, multicompetitive, electronically driven environment,” he stated.

Now traders on the floor of the New York Stock Exchange (the NASDAQ’s competition) do only about 2 percent of the average daily volume of that exchange, Noll said. All other trading is electronic. Even on the floor, traders perform 98 percent of their business from an electronic handheld unit, and the trade goes directly into the book, he explained. Traders no longer stand in a crowd and represent an order.

The switch to electronic trading started “an arms race for advancements in technology,” Noll said. This first manifested itself in a drive to reduce latencies in the system, to make trades faster. Everything became about speed, he explained. Trades operate on a price/time priority basis. The best price wins, and “the first guy at the price is at the top of the order chain,” said Noll.

Speed is so important that all the trading companies have had to make enormous investments in collapsing the latencies embedded in the systems. “We went from five or six years ago having an average order time of 500 milliseconds” to now having an average of 40 microseconds, Noll told the attendees.

Noll said this drive toward reducing latency has increased efficiency, lowered cost and increased competition in the market. It has also spurred the development of the colocation business. “Colocation is the location of trading engines next to the matching engines for that business,” he explained, adding, “We like to refer to this as a fairness leveler.”

In the past, the exchange had to slow down trades that came in to matching engines from New York, to match the length of time needed for them to come in from places like Seattle, Noll said. “There were governors on the system. … What we do now is open our data center; anyone who wants to colocate a machine in our data center is free to do so,” he noted. Now everyone at the data center is no farther away from the matching engine than anyone else, leveling the playing field, he said.

Where do the financial industries go from here in terms of technology? Noll asked rhetorically. “I think latency as a gain for financial services is about over. … We can invest and perhaps go from 40 microseconds to 30 microseconds, but the net material gain for getting faster is almost meaningless,” he noted.

There are a few pockets where speed can be picked up, Noll said. “We just introduced a microwave network system, called a short-haul system, here in the metro New York area. The system connects the main data center in Carteret with the centers in Secaucus and Mahwah. … There are some real latency gains in terms of microwave communications between those centers that we are starting to exploit,” he said.

NASDAQ is also introducing long-haul microwave service over the next couple of months that will go from the Chicago Mercantile Exchange (now CME Group) data center in Aurora, Ill., to the company’s Carteret data center. “We are not the provider; we are using market providers,” Noll noted, but there is a NASDAQ/CME partnership to develop this project.

“Ironically enough, microwave is just a little bit faster than dark fiber,” Noll said. One limitation, however, is that packet size has to be small for microwaves. Otherwise, it quickly degrades. “Right now it is only really useful for market data rather than order transmission,” he noted.

Noll believes there will be technological improvements involving machine-readable news. Many algorithmic traders today use this kind of news to trigger trades because there is no longer any time built into the system to read and interpret events that might affect the market at large.

Electronic traders use programs that read data feeds coming from news services. “There was some controversy over this a couple of months ago,” Noll noted, “when one of the news services [allegedly] breached the firewall of one of the agencies and began releasing information early. It was only a couple of microseconds early, but that was enough to give someone an advantage.” Noll thinks there will be latency gains in this area as well.

NASDAQ is placing technology bets on “determinism,” Noll said. “I get more complaints from market participants that say something like, ‘Your average trade is 40 microseconds, but my trade took 90 microseconds, and I missed the trade.’ ” Software that will alleviate this problem, so traders are sure of the timing and execution of their trades, will be important, he said. This will involve cleaning up market data and ensuring performance is efficient, he added.

Noll concluded by noting that the company is diversifying away from equities and will be working with the Philadelphia Stock Exchange (now owned by NASDAQ) on options and others for fixed-income securities. It also is venturing into U.S. treasuries with its purchase of eSpeed, a central order-booking firm. NASDAQ hopes to apply its technology to eliminate latency and other inefficiencies in these systems as well, he said.