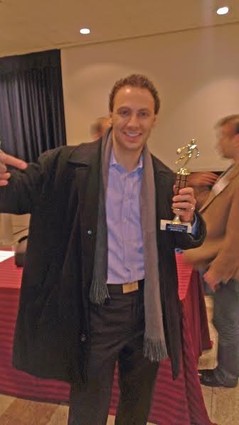 Three optimistic and excited startups pitched to 100-plus entrepreneurs at the 43rd monthly NJ Tech Meetup on the Stevens campus in Hoboken on Dec. 16, 2013.

Two of the companies cater to enthusiasts of popular hobbies, while the third seeks to solve a contemporary nuisance.

As at every meetup, the startups pitched to practice their stories, interest other entrepreneurs and compete for an “audience choice” trophy.

The first company to pitch, Somerville-based Spudder, is a social networking site for amateur sports, which, according to the company, is a $5-billion market with events in three million venues nationwide. According to presenter Dennis Harabin, fans can find plenty of articles, statistics, photos and videos with sports updates, or spuds, for professional sports, but not as many for local ones.

“Individuals are used to, and spoiled now, that when it comes to professional sports you can know what’s happening, but when it comes to your kid’s soccer game — the sports that matter most to you — you can’t get those updates,” Harabin said.

Besides connecting players, coaches, parents and fans, Harabin said that Spudder will also help athletes and leagues with fundraising for uniforms, equipment and other needs. The Spudder team includes Lonnie Allgood, a former NFL wide receiver who has experience raising money for nonprofits.

The company will collect a fundraising percentage, and it will also offer an advanced subscription service. Harabin said Spudder is currently looking for beta users, who can register on the company’s website.

After Spudder pitched, John Genovese of PolitePersistence (Monmouth County) approached the stage with gusto. “We help entrepreneurs and business owners put the muscle in their hustle by being politely persistent in business, leadership and life,” Genovese said. “Our work allows us to accelerate the purposes of awesome people and great companies who are making a difference.”

PolitePersistence adds that muscle by streamlining the way businesses and individuals send follow-up emails. Genovese said that sending follow-up emails, whether to confirm appointments or remind recipients to answer, takes up too much of a sender’s time.

With PolitePersistence, however, users can type their initial and subsequent emails on one screen, using templates if they choose. They can schedule times to send the emails, and the program will cancel the follow-up emails once the recipient responds to the first one.

Genovese said that for now, PolitePersistence will work with Gmail, but that the company wants to add other services such as Outlook and Thunderbird. The service works on a free-to-premium revenue model, in which $4.99-a-month premium users can send an unlimited amount of emails, and free users can send a limited number.

Genovese said that a typical customer might be someone like a real estate agent who wants to confirm appointments with clients.

The final startup to pitch, Asbury Park-based Carponents, caters to car enthusiasts. According to founder and CEO Robin Bhattacharyya, most car sites involve buying and selling new and used cars. Carponents, however, explores everything else.

“These sites ignore a large portion of the automotive community,” Bhattacharyya said. “What about the people who already bought their cars and don’t want to sell for a long time, or people who want to read and talk about cars, or mechanics, car washes and other businesses that aren’t part of the buy-and-sell process?”

Bhattacharyya said that Carponents has three planks. The first is a social network in which users can create profiles, even for their cars, and meet other users, join groups and find news about events. The second plank offers content.

Bhattacharyya said Carponents will share photos, videos and articles on topics such as the best trucks for sports tailgating, and that users can also upload their own content. The third plank will facilitate a marketplace for parts vendors and service providers.

Bhattacharyya said the current market for car parts and services totals $307 billion, which is equal to the combined markets for beer, wine and liquor. Bhattacharyya said he hopes Carponents will especially appeal to owners and fans of exotic and vintage cars.

After all three companies pitched, the audience members voted on a winner, and they picked PolitePersistence by a vote of 43 percent, over 40 percent for Carponents. Genovese accepted the trophy which, in keeping with NJ Tech Meetup tradition, is a repurposed sports trophy first awarded many years ago.

Previous: At Scarlet Startups, Founders Tell How They Located Mentors, Advisers, Cofounders
Next: All in the Insight family: Unitrends buys PHD Virtual to compete against Veeam