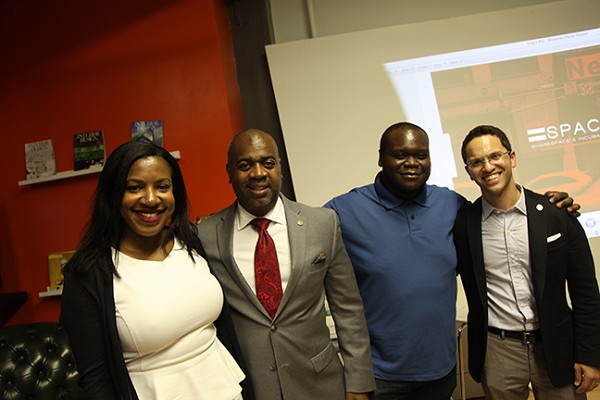 The exchange took place at =Space, in Newark.

Earlier that day, Newark Venture Partners had announced the establishment of a $50 million venture fund and tech accelerator in Newark. Before the mayor’s discussion, Thomas Wisniewski, NVP’s managing partner, explained to the audience at =Space that the new fund would attract startups to the city.

Baraka later told the audience that the new accelerator, and the activation of high-speed Firebolt Wi-Fi downtown as well as the City’s underlying fiber optic infrastructure, rebranded Newark as a tech city.

For too long, Newark has been defined by others, who only see failure, crime or corruption, said Baraka. But no longer. If Newark were really a failed city, “I don’t think this room would be packed with techies from in and around the city of Newark.”

The mayor also said that people keep talking about bringing companies into the community, but hundreds of people are already there, doing great tech right now. “It does my heart good to see this room packed door-to-door because we are concerned about technology in our city and, more importantly, we know what we are doing in terms of technology in this town.”

He said that Newark needs to provide the kind of support that would allow companies to connect with the accelerator, “So if they have 50 businesses, not all 50 of them are from outside of the city of Newark. Some of them are businesses that are right here.”

During the discussion, Frasier asked Baraka to explain his concept of “Newark 3.0,” which had recently become a theme of the mayor’s. Baraka responded that Newark 3.0 was about modernizing Newark and moving it into the 21st century. “This is happening all over the country. Cites are modernizing, becoming more tech savvy and trying to attract millennials.”

Referring to the “My Newark” app, the mayor explained that it allows people to report problems such as potholes or garbage that hasn’t been picked up; and if residents “see something that shouldn’t be happening,” they can report it anonymously. The app also has a flip side that shows events happening in Newark that might be of interest to residents. The next step for the app, said the mayor, would be to have dashboards allowing people to see what the city is doing well and what it isn’t. They could find out, for instance, how many businesses are being licensed in the city or how many houses have been sold in a given area.

Frasier then asked a question about how an incubator in Newark could get people involved who want to use technology to help the city solve its problems. Baraka responded that Seth Wainer, Newark’s CIO, is doing a tremendous job of automating and streamlining operations at City Hall. However, he did like the idea of holding a hackathon of some kind to help find solutions to the city’s problems.

Asked by Wright how Newark plans to bring high tech to the elderly population and “bridge that divide to help seniors who might want to connect with their relatives, so they can be part of the technology change,” Baraka responded that senior centers are becoming technology centers too, as the city plans to provide digital access there.

“We … may be able to bring some of this [fiber optic infrastructure or Wi-Fi] to the senior buildings themselves,” he added. Baraka said that he’d like to expand the city’s free and very fast Wi-Fi, which is now available in only a limited area, throughout the city, including people’s homes.

Wright asked Baraka what Newark could do to further support tech startups in the city, and Baraka had a ready answer. “We have to clear out all of the obstacles that are in peoples’ way. Part of that issue is the work we are already doing to make it easier for people to start businesses” in the city. Baraka said that the city is streamlining the process, and should be done with that in a couple of weeks.  He also noted that the Newark Community Economic Development Corporation provides help with capital and infrastructure to enable businesses to get off the ground.

“We are game to make that happen,” he said. “We are excited,” and want companies to “knock down our doors” so that the city can provide them with opportunities.

Newark is going to be a “smart city,” the mayor concluded. “We are going to have kiosks up and down Broad Street” so people can find out what’s going on in the city.” Information will pop up on smart phones when people walk by the Newark Museum to tell them about current exhibits. And as people drive past the New Jersey Performing Arts Center, they’ll be able to learn about upcoming shows. “We can make that happen in Newark because we have the infrastructure to make that happen.”

The mayor looked around the crowded room, and said that the audience should be excited by what is happening in Newark. “You guys can go out there and do so much with this information and this infrastructure.” He added, “I want to see two or three multimillionaires from the City of Newark that start tech companies right here in their home town.”