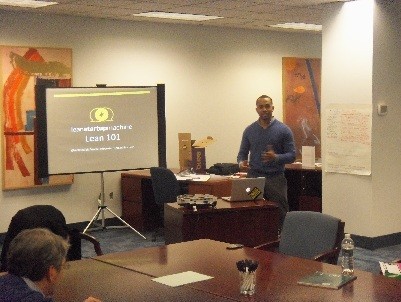 As part of an ongoing quest to further ignite tech entrepreneurship in Newark, tech leaders there have been busy devising inspirational and educational events.

On December 10, 2012, a workshop entitled “Lean Startup: Advancing the Science of Entrepreneurship” was held at the Institute for Entrepreneurial Leadership. The city will also host a three-day Lean conference in March 2013.

Lean seeks to counteract the traditionally high rate of startup failures by using scientific and empirical data to mitigate uncertainty. Lean entrepreneurs try to understand what customers want and deliver a market-ready product as quickly as possible. They’re attentive, flexible and move so quickly that they don’t even bother writing business plans.

Steven Royster, formerly an Alcatel-Lucent (Murray Hill) associate and currently a senior venture officer at the New Jersey Economic Development Authority (EDA), said he turned to Lean when trying to learn from some of his own failed ventures.

“I really took to the framework and the model where we’re taking the ideas to market,” Royster said. “It just made sense.”

Energetic and enthusiastic, Balbi opened the session by noting that he was excited to launch a business soon after graduating from college. Soon after that, the business failed.

“I fell into the abyss of entrepreneurship,” he said. “I started asking myself, What if? — What did I do wrong?”

Trying to make sense of his own failures, Balbi, like Royster, turned to Lean. He read “The Lean Startup,” the 2011 Eric Ries bestseller that has become the bible of Lean evangelists, and has been preaching its tenets ever since.

Balbi now believes entrepreneurs should treat business ideas like hypotheses and ask questions like scientists. Lean calls this process “customer development.” That means entrepreneurs should first talk to customers about what they want before spending time and resources building a product that might not have any market value.

“Many of us have pre-built solutions we’re trying to sell, but customers want us to solve their problems, not [devise] our own solutions,” Balbi noted.

Balbi said entrepreneurs should test their hypotheses by building what Lean calls a “minimum viable product,” which often isn’t even real. He cited the creators of Dropbox, who put an ad on tech websites asking if people were interested in a file-sharing service.

The creators hadn’t yet built the service, but once tens of thousands of people answered “yes,” they knew they had an idea worth pursuing. They knew their customers, what those customers wanted and how to provide it to them quickly, and they were able to obtain funding more easily because they could prove they had a market-worthy product.

Lean entrepreneurs can use a similar technique, but they can also learn a lot by just talking to people. Royster gave the example of his experience at a three-day Lean workshop in New York, during which he and his group tested an idea for a personal training service by visiting gyms and talking to members about their exercise habits. He said the group’s idea evolved after so many conversations.

Balbi said Lean entrepreneurs often find their ideas evolve so much during customer development that they prompt what adherents call a “pivot.” He said entrepreneurs should be ready to pivot if they find a first idea faltering but a second one emerging. Balbi provided several examples of successful pivots, including Instagram, which started as a location check-in service before turning to vintage pictures.

But Lean isn’t a flawless strategy; it’s only as good as the entrepreneur using it. One workshop attendee asked how an entrepreneur can know if he or she has gathered enough customer data to properly assess an idea.

Balbi replied that entrepreneurs have to make an educated guess as to how many and what types of people to speak with. He added some suggestions, such as taking notes and never asking family or friends, who may be biased. “It’s one part analytical and one part intuition, but it’s not exact,” he said. “But you’ll know when you see a pattern.”

The workshop audience itself was lean, capped at just 10 students, but the group’s members exchanged plenty of dialogue. Though nearly all had an entrepreneurial background, many were “regular people,” including a middle school teacher and a night court officer who had been looking for a way to build a successful business.

One participant, John Incantalupo, said he and his wife had tried startup ideas but hadn’t yet found their “Facebook or Pinterest.” He said they’re now working on an idea for a fishing website, and he’s interested in seeing if Lean can help.

“We’ve come to find that it’s a much better process to learn about what your customers want first, before you actually design a product,” Incantalupo said. “We did it backwards last time.”

That may be tough to admit, but Incantalupo is just like Royster, Balbi and others: hoping that after Lean he’ll look back at failure as a funny story on the way to success. Balbi is definitely a believer — a sticker on his MacBook says “Fail Fast, Succeed Faster.”

Previous: New Jersey Schools to Use Lightpath Grants for Innovative Projects
Next: NJ Startups Answer: Besides Securing Financing, What Was Your Biggest Hurdle in 2012? Part 1